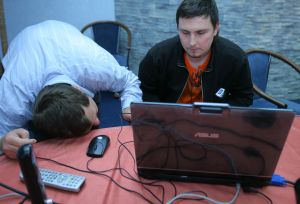 State Duma deputies want to promote the production of patriotic computer games to attract players away from the "harmful" games produced in the West.

The State Duma Committee on Youth Affairs has drafted a law that will provide support for "interactive technologies, computer and video games in the Russian Federation.”

“The market is oversaturated with Western computer games, thanks to which our children are absorbing images and values that belong not to our own, but to Western culture,” said Svetlana Zhurova, Vice Speaker of the State Duma. Zhurova was talking at a round table on the role of computer games in forming values and patriotism among young people today.

To rid Russians of the influence of the West, the initiators of the draft law propose to inject an element of patriotism “in the national industry of computer and video games by supporting domestic manufacturers who aim to develop projects of a national-patriotic sort.”

Specifically, they want to introduce Russian children to Russian heroes, to reconstruct events from Russian history in computer games and use images found in Russian nature.

The companies that agree to produce these games should receive preference in the form of reduced tariffs on insurance, pension and contributions to other federal funds. Moreover, the Value Added Tax will not apply to electronic providers of these games and the federal program Electronic Russia 2011-2016 will include items on developing the industry of interactive technologies, computer and video games.

The developers of computer programs are not opposed, of course, to recieving support in their battle for the Russian player. Some 10 to 25 million Russians actively play computer and video games. In 2009, the computer and video games market totaled 24 billion rubles ($800 million), estimated Sergei Orlovsky, president of the Nival Group. This market is expected to increase by 15 percent to 20 percent in 2010.

“One can only be glad that the state is beginning to see the computer games industry as a promising branch of high technology and developing appropriate measures to support it,” said Anatoly Subbotin, head of promotion at 1C. “Even moral support means a lot.”

However, experts doubt that such support will help patriotic games compete with “non-patriotic” ones. “These initiatives may be implemented, but in the near future there will only be a small number of such projects,” said Maxim Klyagin, an analyst at Finam Management.

Moreover, it will be extremely difficult to draw fans away from the most popular games by creating worthy competitors.

“Gamers are special people. They’re not exactly apolitical, but they’re definitely not on the same wavelength as the authorities,” said Andrei Lensky, editor of a Russian magazine called Best Computer Games. “And whatever they do, it probably won’t appeal to Russian gamers, who actively play Western games. Even decreasing the amount of violence probably won’t be possible. Audiences are restricted worldwide. This system works in the West because games with a certain rating may be sold only in special stores. In Russia, that probably won’t work. The sellers will try to get around any restrictions. Plus the active distribution in Russia of Games Torrents means you can download anything you want.”