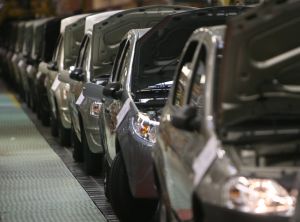 "The project has been approved as a whole, the prime minister [Vladimir Putin] backed the proposal to build a pilot factory with a capacity of 10,000 vehicles in Togliatti," Prokhorov told journalists after a meeting of the government commission for hi-tech and innovations.

The project of hybrid car production will be the first project of this kind in Russia, which is seeking to rid its dependence on raw material exports and switch to a knowledge-based, innovative economy.

Prokhorov, whose business interests range from gold to a U.S. basketball club, sold some of his most attractive assets just before the global economic crisis struck and is now willing to invest cash in innovation projects.

Prokhorov said he had selected Togliatti in Russia's Volga area as the site for the plant's construction because the city has freely available production capacities and qualified personnel.

Togliatti is a depressed Russian single-industry town, home to the country's largest automaker AvtoVAZ, which has been struggling to stay afloat in recent years over its inability to offer competitive car models to consumers.

Analysts say the production of new hybrid cars in Russia may yield profits only if the car output reaches several tens of thousands vehicles. Also, the project may experience difficulties with the supply of quality components.