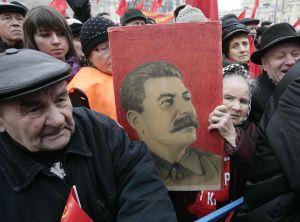 Whenever the powers that be, local or federal, need to create a distraction from events that reflect badly on them, they bring up Stalin.

The demolition of houses and cottages in the Rechnik settlement outside Moscow is a case in point. The summary bulldozing caused a major uproar in the press and prompted President Dmitry Medvedev to order the Prosecutor General’s Office to check whether the rights of Rechnik residents had been violated. The results of that investigation could badly damage the reputation of longtime Moscow Mayor Yuri Luzhkov.

Enter Stalin. Ahead of the 65th anniversary of the Soviet victory in WWII, portraits of the “father of all nations” will be displayed all over Moscow on “information stands.” These posters will include texts describing Stalin’s role as the supreme commander-in-chief and of his contribution to the defeat of Fascism. The posters will be designed by the Moscow Advertising Committee. The committee is headed by Vladimir Makarov, who was recently released from a detention center where he was awaiting trial on charges of corruption.
At his first press conference following his release on bail, Makarov said that veterans’ organizations had requested that stands be set up in the center of the city describing Stalin’s role in the war.

The idea was immediately denounced, and not only by rights activists.

“There’s no escaping the truth: Stalin played a role in that war, that’s a fact,” said former Soviet President Mikhail Gorbachev. “But it seems to me that we’ve already understood everything about Stalin, and that what happened, and how, should be recounted objectively in books and textbooks.” Gorbachev noted that “Stalin had made many mistakes, especially on the eve of the war and in its early stages.”

The idea of the Moscow city authorities was also rejected by State Duma Speaker Boris Gryzlov who, like Luzhkov, is a member of the United Russia party. “With reference to the results of the Great Patriotic War, we can say that in Russia the victor was not Stalin, the victor was the people.” Gryzlov said that it was necessary to talk about the role of the Russian people, especially the veterans who achieved victory for the country. “You cannot rectify Stalin’s ambiguous role in the life of our country with posters,” he added.

This is not the first time that the Russian authorities have used stories about Stalin and Stalinism as PR. Last fall, at the start of the campaign for the Moscow City Duma, the Moscow city authorities reinstated a Soviet-era decoration in the Kurskaya metro station. The gilt-edged decoration is a line from the Stalin-era national anthem: "Stalin reared us on loyalty to the people." The city authorities also planned to reinstate a bust of Stalin, but this unleashed a heated public debate.

The idea of publicly restoring the image of one of the bloodiest tyrants in the history of mankind comes at a tricky time for the powers that be. The city authorities are trying to cope with the fallout from the Rechnik scandal, while the federal authorities are trying to deal with two major demonstrations — in Kaliningrad and in Irkutsk — where unprecedented thousands of people turned out bearing slogans, including one’s calling for Putin’s resignation.

Given the equivocal attitude towards Stalin of part of the Russian elite and attempts to insert his name into the current political context, “our leader and teacher” is not a bad way of distracting people from more pressing problems.
The desire to impose its own political agenda on society and determine the main topics of discussion in the media is a hallmark of the propaganda machine created during Putin’s presidency. This system also relies on the image of foreign enemies. But owing to the circumstances — negotiations with the US to reduce strategic weapons, the election of Viktor Yanukovich in Ukraine, the impossibility of using Georgia to seriously distract people in Russia — other reliable devices will have to be found.

Much has been said and written about why Stalin and Stalinism remain traumatic for Russian society and inevitably provoke sharp debate. The powers that be would indeed prefer that society and the opposition discuss portraits of Stalin in the middle of Moscow than the demolition of houses in Rechnik, the mass demonstration in Kalingrad or the latest “brilliant display” by a drunken policeman driving a Mercedes.