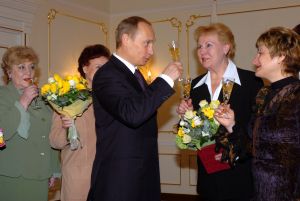 March 8 is Women's Day. Not just a chance to give flowers and chocolates, but also a reason to celebrate the achievements of some of Moscow's many great women: Poets and politicians, saints and sculptors.

Literature
Moscow's most celebrated woman writer is the poet Marina Tsvetaeva. Born in 1892 on Trekhprudny Pereulok, near the "Patriarch's Pond," her evocative lyrics are steeped in Moscow's changing landscapes. She eulogizes "the little houses of old Moscow" and writes of walking with a friend during the revolutionary years "like solemn foreigners/ throughout my native city."

The building where Tsvetaeva was born and the church where she married Sergei Efron have both disappeared, but the house where they lived, on Borisoglebovsky Pereulok, is now a museum. A thoughtful, new monument to Tsvetaeva was unveiled across the road in 2007.

Her post-revolutionary years in this house were not easy. Nadezhda Mandelstam wrote after one visit: "Like all former upper-class apartments, it was now given over to dust, dirt and decay," while Tsvetaeva's friend Prince Sergei Volkonsky remembered: "The dark and cold came in from the street as if they owned the place." For many years, Tsvetaeva lived abroad and, when she did return in 1939, she was deeply unhappy in the altered Moscow. She committed suicide in 1941.

Nadezhda Mandelstam, wife of the poet Osip Mandelstam, lived for many years in Moscow and wrote two volumes of her autobiography, "Hope against Hope" and "Hope Abandoned." The titles play on the meaning of her name, Nadezhda, "hope." After Osip was killed for his anti-Stalinist poems, Nadezhda was exiled from the capital until 1964, when she finally returned to live her final years in the high-rise suburb of Novy Cheryomushki in southern Moscow. A visiting American recalled: "Although the building was quite new, everything in it was already old and battered."

Theater
As a supremely theatrical city, Moscow has - of course - been home to numerous great actresses. The great nineteenth century star of the Malyi Theatre, Maria Yermolova, lived on Tverskoi Bulvar. Her elegant house is now a museum, where you can see a diorama of Teatralnaya Ploschad as it looked in Yermolova's day and a recreation of her dressing room with costumes and make up.

In a portrait by Valentin Serov in the Tretyakov Gallery, she looks dignified and intelligent in her long black dress, but more evocative still is Leonid Pasternak's painting of her debut entrance onto the Malyi stage. She stood in as understudy at the age of sixteen and became a star overnight. The director Konstantin Stanislavsky said she was the best actress he had ever seen.

Anton Chekhov's wife, Olga Knipper lived in the theatrical apartment block on Glinishevsky Pereulok. She was one of the original members of the Moscow Art Theatre and was the first actress to play Masha in "Three Sisters" and Ranevskaya in "The Cherry Orchard." Chekhov wrote the part of Masha with her in mind and wrote to her teasingly in 1900: "What a part I've got for you in Three Sisters. Give me ten rubles and you can have it, otherwise I'll give it to another actress." You can see photos of her in these and other roles at several of Moscow's theatrical museums, including the MKhAT museum on Kamergersky Pereulok.

Both actresses are buried in the Novodevichy Cemetery. Yermolova's grave has a draped urn and her famous profile as decoration. Knipper is buried next to her husband under a simple slab with the MkhAT's seagull logo on it. Among the many other actresses buried there is the Soviet film star Lyubov Orlova, who has a bronze rose on her tomb. There is a memorial plaque to Orlova above the McDonald's on Tverskoi Bulvar.

Dance and Music
One of the most striking monuments to a woman in the Novodevichy Cemetery commemorates the ballerina, Galina Ulanova, who was born 100 years ago this January. The white marble relief attempts to capture her grace and style. The composer, Sergei Prokofiev, described her as "the genius of Russian ballet, its elusive soul, its inspired poetry," while fellow-dancer Rudolph Nureyev called her "the world's number one ballerina." Her flat in the Kotelnicheskaya apartment building is now a memorial museum.

Three musical Gnesin sisters, Eugenia, Helena and Maria, graduated as distinguished pianists from the Moscow Conservatory and went on to found the Musical Academy on Povarskaya Ulitsa. Outside the concert hall, there is a bronze statue of Helena playing a winged piano. Inside, there is a memorial apartment with concert programs dating back to the nineteenth century.

Sculpture
Two famous Soviet sculptors have left their very different imprints on Moscow. Vera Mukhina's most celebrated work, the monumental "Worker and Collective Farm Girl" has recently been reinstated at the northern entrance to the All-Russia Exhibition Centre. She originally designed the 25-meter-high stainless steel sculpture for the 1937 World's Fair in Paris. Ten years later, the statue became the Mosfilm logo. An exhibition hall is due to open in the pavilion under the restored monument later this year, and there is also talk of a turning Mukhina's lovely, but dilapidated studio on Prechistensky Pereulok into a museum.

Anna Golubkina's studio, around the corner on Bolshoi Levshinsky Pereulok, has been a museum - on and off - since 1932. Her wonderful, impressionist sculptures include busts of Leo Tolstoy and Mikhail Lermontov. Her most famous outdoor work is the "Wave" bas relief over the doorway of the Moscow Art Theatre.

Art
More works by Golubkina and other female artists can be seen in the Tretyakov Galleries. Zinaida Serebryakova's paintings, in the older gallery on Lavrushinsky Pereulok, include beautifully intimate family groups and the celebrated self-portrait at the dressing table. Natalia Goncharova, whose colorful, avant-garde works dominate the early rooms in the New Tretyakov, is just one of many female artists on display in this collection of post-revolutionary Russian art.

Besides women artists, there are also increasing numbers of women who own galleries in modern Moscow. One of the highest profile openings of recent years, was Dasha Zhukhova's "Garage" Centre for Contemporary Culture in a coverted constructivist bus station. The latest exhibition, featuring works by Malevich opened on March 5.

Politics
Eighteenth century Russia had powerful female rulers, like Catherine the Great. Twentieth century Russia saw women prepared to die for their beliefs. The revolutionary Zoya Kosmedemyanskaya, killed by the Nazis, is remebered in a statue in Partizanskaya metro and in the name of a road in the northern suburb of Voikovskaya. Her last words were "I am not afraid to die. I am happy to die for my people."

Women have continued to wield power, usually behind the scenes. Raisa Gorbacheva's role as an unusually public Russian first lady was influential in changing the country's image abroad. The perpetual flowers around her bronze memorial in the Novodevichy Cemetery bears witness to her enduring popularity. A similarly elegant monument to Lenin's wife, Nadezhda Krupskaya, stands on the boulevard ring.

Religion
Princess Elizabeth, later canonized as St. Elizabeth Romanova, founded the Martha and Mary Convent in 1909. The convent contains one of Moscow's most beautiful churches, the Art Nouveau Intercession. A statue of Elizabeth stands beside the church.

Another twentieth century saint is the popular Matryona Nikonova. Born with no eyes in an impoverished village, she was credited with divine vision and healing powers. There is even a legend that Stalin secretly visited her and she told him that Moscow would not fall to the Nazis. She is buried in the Church of the Protecting Veil in the Pokrovsky Monastery and queues to visit her shrine often last for several hours.