"I lay more blame on my own president" 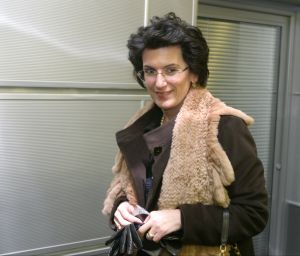 In an interview with Gazeta.ru, Georgian opposition leader Nino Burdjanadze explained why she agreed to meet Russian Prime Minister Vladimir Putin. Despite potential negative reactions from her compatriots, Burdjanadze believes that a renewal of a dialogue with Moscow is essential and lays full responsibility for the loss of South Ossetia and Abkhazia on Georgian President Mikheil Saakashvili.

Gazeta.ru: What are your lasting impression from your meeting with Vladimir Putin? What was the aim of these discussions?

Nino Burdjanadze: The Russian-Georgian relationship has really hit rock bottom. Right now it is in a tragic state and we must find a way out of this situation. This is not doing any good for either Russia or Georgia. I’m convinced that for the sake of peace in the South Caucasus and Georgia, it is necessary to seek ways of normalizing the relationship with Russia so it can be built on mutual trust and respect.

When there is no dialogue on the government level, then we must draw on whatever we can, if only to see how to form relationships in the future.

Mr Putin and I had a very interesting meeting. He has a very deep knowledge of the Caucasian problems.

We discussed a whole spectrum of issues concerning Russo-Georgian relations and ways of improving them. I saw that he understood the problems that are disturbing my people.

Gazeta.ru: So not all Georgians share the opinion that the Russian government in general and Putin in particular are aggressors and occupiers with whom it’s impossible to have a conversation?

N.B.: What happened in 2008 was very difficult for Georgia and also to a certain extent for Russia. It is not right to constantly return to the past and resort to name-calling. The period when we were not listening to each other and didn’t want to listen, but rather wanted to curse each other didn’t lead to anything positive. We must do things that settle the problems and not continue to aggravate each other.

Gazeta.ru: Tbilisi’s main condition for a renewal of a dialogue is officially a complete removal of troops from Abkhazia and South Ossetia. Do you agree?

N.B.: Any negotiations that begin with preliminary conditions are doomed to fail. My personal view is that both within my country and abroad the most important thing is for us to find a way to communicate with the Abkhazians and Ossetians, and for my homeland to become united and indivisible. I am going to make every effort to take the relevant steps toward this end.

But I understand one thing very well: If we are not prepared to talk to Russia, then the problems of Georgia’s unity will not be resolved. As for Georgia’s refusal to talk to Moscow until the troops have been removed, I can say that not one Russian soldier will leave Georgia’s territory if the governments are not going to talk to one another. This would be obvious even to a child.

Gazeta.ru: If you come to power, will diplomatic relations between Russia and Georgia be restored?

N.B.: It is when relations are most strained that diplomacy should be in operation. When people make an effort to listen to each other, the guns fall silent. Whoever comes into power, I hope that the next reasonable government of Georgia will understand the necessity of respecting others, encouraging them not with force, of course, but by reasoned decisions and approaches.

Gazeta.ru: Saakashvili will be ready to step down only in 2013 at the end of his presidential term. Did you and Putin discuss any concrete steps that could be taken to improve relations between the countries in the next three years?

N.B.: We didn’t discuss the end of Saakashvili’s term, since this is an interior matter for Georgia. The Georgian nation should decide for itself when the president steps down and who will replace him. It would not be right for Russia or other countries to interfere in this.

Until Saakashvili leaves office there is little opportunity for a breakthrough in relations between Russia and Georgia. I’ll tell you directly that I have once again been convinced of the fact that while Saakashvili is in power, there won’t be any real progress.

I have never hidden the fact that Georgia needs to hold presidential elections earlier than planned. I don’t approve of what Saakashvili did, especially in August 2008. First of all, we need to return the Abkhazians and Ossetians, and then speak about boundaries.

If the opposition succeeds in receiving the support of the nation and gains victories in the early presidential elections, then we will immediately start to solve the problems that have been accumulating not only in Russian-Georgia relations but also in other areas.

Gazeta.ru: In Georgia, the reaction to your visit to Moscow was not unambiguous. For example one of the leaders of your party, Zurab Bigvava already left the party in protest.

N.B.: I think that the Georgian government raised this theme on purpose. I emphasize that no one left the party over this, and this includes Bigvava. There were arguments and disagreements about the timing of the visit and its consequences, but no one denied the possibility and necessity of discussions with Russia.

Gazeta.ru: Does this mean that Putin is closer to you than Saakashvili?

N.B.: It is not right to ask a question about who is closer and who isn’t. This is politics, and here such questions are inappropriate. My president broke the fundamental promises he made to our people. He promised to build a democratic state, but violated nearly all the principles of democracy.

Saakashvili ruined our state’s prospects for development. He promised to reunite Georgia and solve the problem of Abkhazia and South Ossetia, but in the end lost more territory.

Saakashvili altered the map of our country, and the Georgian people are not going to forgive him this.

Gazeta.ru: So you think that Saakashvili altered the map of your country, not Putin?

N.B.: Saakashvili should have foreseen what could result from his actions.

I demand that my president be responsible for the interests of my country. It would not be right to expect Putin or Medvedev to take responsibility for Georgia’s interests.

As a citizen and voter, I should be able to expect my president to evaluate the potential consequences of his actions. Therefore it is hardly surprising that I lay more blame on my own president than on anyone else.

Gazeta.ru: Have you discussed the possibility of repealing Russia’s decision recognizing the independence of Abkhazia and South Ossetia? Or some other options for resolving this problem in the future?

N.B.: I’m not ready to talk about the details of our discussions, which could influence the continuation of negotiations. This meeting gave the definite impression that in Russia, people understand the problems and would like to start an intelligent discussion. I consider this a wholly adequate opportunity for sensible politicians in Georgia to start to communicate with their Russian colleagues.

Gazeta.ru: Are you worried that Georgian voters won’t understand your discussions with Putin?

N.B.: When average voters receive real information, and not that which comes to them through the prism of television controlled by Saakashvili, I am sure that they will judge what I have done correctly and respond in a positive way. At present Saakashvili has sort of “zombified” people and there will be those who will criticize me, but this doesn’t worry me.

Gazeta.ru Has Putin offered you some support, for example, in the coming elections?

N.B.: No. There can be no question whatsoever of support, not of me, not of other politicians. I think that Russia understands that if it wants to have stable relations, then the president of Georgia should be chosen without interference from outside, no matter where it comes from.