Gorbachev's Legacy Examined, 25 Years After His Rise To Power 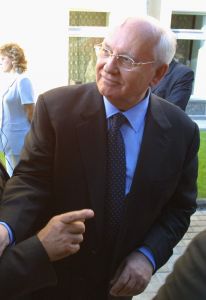 All the familiar signs were there. Something was very wrong in Moscow. Black limousines sped to and from the Kremlin in the dead of night. Classical music replaced regular programming on television. An ageing leader had not been seen in public in months.

But when the ailing 73-year-old Konstantin Chernenko died on the evening of March 10, 1985 — the third Soviet leader to expire in just over two years — there were also clear signals that something different was afoot. For one thing, it took the Central Committee just four hours to choose a successor, the fastest transition in Soviet history.

In a clear break from tradition, official Soviet newspapers showcased the appointment of the country's new leader on the front page the next morning, relegating Chernenko's obituary to page two. The Soviet elite, it appeared, was eager to turn the page — and turn the page they did.

It was 25 years ago today that a 54-year-old Mikhail Gorbachev became the youngest-ever leader of the Soviet Union. He began his tenure seeking to reform, and thus save, a decrepit Soviet system that was falling behind its Western rivals in every way. He ended up transforming his country beyond recognition, leading to the breakup of a once-mighty superpower and the end of the Cold War.

In a recent interview with RFE/RL's Russian Service, Gorbachev, now 79, said that despite the fact that his reform program did not turn out as he would have wished, he nevertheless had no regrets.

"There were so many trials, so much work, day and night, night and day, and people were ungrateful," Gorbachev said. "But then I asked myself, 'Why should people thank you?' The question should be put the other way around: 'You've had such great luck, to be able to change this massive country. What greater happiness can you ask for?'"

Since leaving office following the 1991 Soviet collapse, Gorbachev has moved in and out of the public eye. A fierce critic of Russia's first post-Soviet leader, Boris Yeltsin, he ran unsuccessfully for president in 1996, winning just 0.5 percent of the vote.

He has been more supportive of Yeltsin's successors, Vladimir Putin and Dmitry Medvedev. But recently, he has emerged as a critic of the Russian leadership's backsliding on democratic principles.

On March 5, Gorbachev accused Prime Minister Putin's government of trying to initiate a modernization program for Russia from the top down, "practically without the people." Gorbachev also harshly criticized the ruling United Russia party of seeking a monopoly on power "like the Communist Party of the Soviet Union, only worse."

Gorbachev's ascent to power represented a generational sea change. For decades, the country had been ruled by the so-called Class of 1937, the generation of officials who had survived Stalin's purges and rose in the Soviet bureaucracy following his death.

Epitomized by longtime Soviet leader Leonid Brezhnev, who ruled from 1964 until his death in 1982, that generation survived World War II and the Great Terror — and prized caution and stability above all.

The Soviet Union became a global superpower under the rule of Brezhnev and his contemporaries, but by the late 1970s and early 1980s, its economy was stagnant, life expectancy had plummeted, and public cynicism was rampant.

As Vadim Medvedev, a onetime Gorbachev aide and former high-ranking Communist Party official, explains, by the mid-1980s, there was a widespread consensus that younger and more dynamic leadership was needed.

"I understood," Medvedev said, "and many others understood, that change was necessary and this change was connected to the election of a new young leader."

Gorbachev promoted like-minded people to key posts. He replaced Foreign Minister Andrei Gromyko, who had served in his post for 28 years - and was known in the West as "Mr. Nyet" - with Eduard Shevardnadze. He also brought Aleksandr Yakovlev, the former Soviet ambassador to Canada, into the Politburo as his chief ideologist.

Gorbachev began his reforms methodically. In April 1985, he called for a policy of "acceleration," a fast-paced technological modernization and an increase in agricultural and industrial production. He also instituted quality control on consumer goods and initiated an anti-alcohol campaign.

Medvedev told RFE/RL's Russian Service that initially, Gorbachev thought he could rely on more or less traditional Soviet methods to revive the economy.

But it soon became clear to the new Soviet leader that the system was in need of a more fundamental overhaul. He used the occasion of the 27th Communist Party Congress in February-March 1986 to announce his signature policy of perestroika, or restructuring.

"When we took the first steps with perestroika, we tried to change the economic situation with more well-known methods - strengthening discipline and order, improving management techniques," Medvedev said. "Later we saw that we needed to go deeper."

In an effort to pressure conservative elements in the Communist Party, Gorbachev also introduced the policy of glasnost, or openness, relaxing censorship of the media and restrictions on free speech. Political prisoners were freed, victims of Stalin's purges were rehabilitated, free expression flourished, and previously banned books were officially published.

"We soon understood that economic change wasn't possible without political and ideological change," Medvedev said, explaining the motivation behind these more radical political moves. "We needed a complete change in our society's point of view."

In the summer of 1988, Gorbachev launched his most radical and consequential reform, a complete overhaul of the of the government apparatus. He established a new legislature, the Congress of Peoples' Deputies, part of which would be chosen in competitive, multicandidate elections. He also established a new executive presidency, which would be elected by the new legislature.

A Life Of Its Own

On March 15, 1990, slightly more than five years after coming to power, Gorbachev was elected the Soviet Union's first - and ultimately last - president.

Together with Shevardnadze, Gorbachev also pursued a rapprochement with the West, signing key arms control pacts with US presidents Ronald Reagan and George H.W. Bush. When Soviet satellite regimes fell across Eastern Europe and the Berlin Wall came down in 1989, Gorbachev did not intervene, earning himself a Nobel Peace Prize in the process.

But the forces Gorbachev unleashed soon took on a life of their own, ultimately derailing his goal of modernizing - and thus saving - the Soviet Union.

His economic reforms undermined the moribund, centrally planned economy without establishing a functioning market to replace it, leading to widespread shortages, rationing, and public discontent. The intelligentsia initially rallied behind glasnost, giving Gorbachev support against party hard-liners; but the new openness opened the door for his critics as well.

Independence movements flourished in the Soviet republics, most prominently in the Baltics, Ukraine, and Georgia. Lithuania today marks the 20th anniversary of the day it became the first of the republics to declare its independence from the Soviet Union - exactly five years to the day after Gorbachev came to power.

Age-old feuds, like the dispute between Armenia and Azerbaijan over the territory of Nagorno-Karabakh, erupted and threatened to destabilize the country. The new legislature gave a political home to a nascent democratic movement, led by former political prisoner and Nobel laureate Andrei Sakharov, which was less interested in reforming Soviet Communism than in ending it.

By the late 1980s and early 1990s, Gorbachev had completely lost the initiative. Democrats were angry with him for not pushing reform far enough, hard-line Communists and Russian nationalists accused him of going too far and destroying the country, and independence movements in the republics were clamoring for autonomy.

When a hard-line coup against Gorbachev failed in August 1991, the Soviet Union disintegrated into 15 independent countries.

As Medvedev explains, this outcome was the furthest thing from anybody's mind when Gorbachev first rose to power 25 years ago.

"Nobody, including Gorbachev himself, imagined the scope of changes that were coming," Medvedev said. "This all unfolded later in the process."