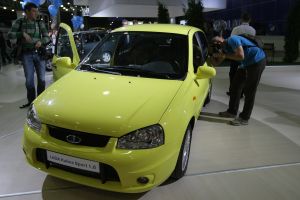 Russian Prime Minister Vladimir Putin appeared on telly at the start of March to call on Russians to buy a Russian-made car as the Kremlin's rescue plan for the beleaguered sector goes into high gear.

"I would like to take the opportunity to urge our citizens - if you plan to buy a new car, don't delay the purchase," Putin said during a meeting of the government's presidium.

He went on to say that the government would pay up to 50,000 rubles ($1,500) for any car made before 1999 if its owner bought a new Russian-made car at one of just under 1,600 dealerships. The state will also subsidize interest payments for car loans offered by just over 100 banks. Putin said that the state has put aside a total of 10 billion rubles($300 million) to finance the scheme this year.

Russia launched its own version of a "cash for clunkers" scheme on March 8, promising to spend $6 billion on subsidising Russian-made car sales as part of a $60 billion rescue package over the next 10 years that is supposed to put the struggling sector back on its feet. Putin said he hopes the incentives will lead to the sale of an extra 200,000 cars.

The subsidy scheme could run through to 2013, a source at the Industry and Trade Ministry told Prime Tass in early March. However, Putin was careful to say in his televised comments that it was not certain the scheme would be repeated next year.

Similar schemes in the US and Europe have been highly successful as punters took the opportunity to trade in their old jalopies for a new car at bargain prices. In Russia the scheme has added importance, as not only will the scheme give the ailing sector (and the economy as a whole) a badly needed shot in the arm, but there is a political dimension as well; 1.4m people work in the automobile industry - almost the entire local economy of state-owned Avtovaz's home town of Togliatti depends on the factory - and the Kremlin is terrified of the political unrest that could follow the large scale closure of car plants.

The Kremlin is about to adopt a new strategy designed to prevent the sector collapsing. The government will gift the sector just under half of the 55 billion rubles it needs to get through this year with more money promised through 2014. In all, the state says the sector needs a total of 630 billion rubles over the next 10 years to transform itself and be able to compete with international manufacturers head to head.

Most of the money will go into research and development, as Avtovaz's best-seller is still little more than a rip off of the Fiat 124 that was on Italian roads over 40 years ago. Russian carmakers invest only about 1 percent of earnings into research and development, versus the 4-5 percent foreign companies invest, according to the draft car strategy that was leaked to the local press.

Russian automotive companies need to invest at least 44 billion rubles a year to catch up with western carmakers, the report concludes. In all, Russia needs to invest a total of 1.8 trillion rubles through 2020 to modernize the sector, a source at the Industry and Trade Ministry told Prime Tass at the start of March. The government will provide a bit less than half this money, with the rest raised from foreign investors.

And that is just the car companies. The component-making sector is largely missing, labor productivity is 50-70 percent lower than the Japanese and the factories' equipment is outdated and worn out. According to one report, Russian workers take as many days to make a car as Japanese workers do in the same number of hours

The Russian automotive sector was probably harder hit than any other sector by the recent crisis. The Russian makers of the Lada and Volga had to close down their factories for weeks at a time as sales dropped off a cliff in the early part of 2009. Even the Russian-based foreign manufacturers that had flocked to cities like St Petersburg and Kaluga in recent years saw their sales tumble as demand fell by more than two-thirds.

The crisis in the automotive industry has come as a bitter blow. Russia briefly became the largest car market in Europe when the number of cars sold - both domestic and international brands - narrowly over took Germany to top 1.65 million units over the first six months of 2008. However, when the economy came to a screeching halt in September 2008, sales simply stopped and this year experts expect Russia to sell a total of 1.4 million for the entire year.

Russian carmakers were already in trouble. Lacking money and burdened by bad management, Avtovaz was struggling to meet the challenge of the flood of imports and the increasing tide of international brands that have been produced locally; the sales of foreign cars (both imports and locally-produced international names) also overtook Russian brands in the middle of 2008. Avtovaz's cars are cheaper than the foreign brands, but the advent of car loans in recent years has brought the foreign cars into range for the average Russian; given the choice, Russian consumers will always buy foreign if they can afford it.

In addition to dropping cash on the sector, the government has been pressuring French-Japanese joint venture Renault-Nissan to contribute more to fixing up Avtovaz. Renault bought a 25 percent-plus-one-share stake in the Russian carmaker and Putin threatened the company the state would dilute its stake if the company didn't become more active at the end of last year.

President and CEO of Renault-Nissan Carlos Ghosn told state-owned TV channel Russia Today that the alliance is ready to consider increasing its stake in Russian carmaker Avtovaz the day before Putin launched the cash for clunkers scheme so clearly the Kremlin is continuing to strong arm the company. "We think 25 percent is a very good stake for starting long-term cooperation," Ghosn said. "Now if the Russian government wants us go further, we will consider this opportunity," he said, adding that he hoped to increase Avtrovaz's share on the market from the current 33 percent to 40 percent over the next 10 years.

On the flip side, GAZ, the maker of the Volga - Russia's "other" car - and owned by oligarch Oleg Deripaska, said at the start of March it wants to form an alliance with an unnamed foreign car marker. A third Russian carmaker, Sollers, has already formed a partnership with Italy's Fiat.

At the same time, the state has moved to head off car worker protests as the rescue of Avtovaz has come with the inevitable layoffs. Exactly how many car workers will lose their job is unclear, but the company said in December it would sack just over 71,000 people at the start of this year.

Part of Putin's rescue package includes 4 billion rubles from the budget to provide employment for out-of-work car workers, which will be given to the Samara region, where the company's plant is located. However, these schemes will generate a few thousand extra jobs at best. The Kremlin is playing a difficult game while it waits for its rescue plan to bear fruit.