Will Lenin leave his tomb? 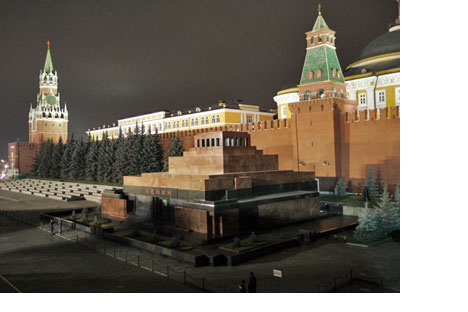 Red Square is to Moscow what the Eiffel Tower is to Paris: a symbol that is instantly recognizable the world over. But after the May 9 parade in honor of the 65th anniversary of the victory over fascism, Red Square will close for a year, for reconstruction. Plans include reinforcing the foundation under the square’s paving stones. This means that access to Red Square will be restricted and visits to the Tomb hard to arrange.
In the center of the capital of one of the largest world powers, hard by the Kremlin Wall, stands one of the most ambiguous monuments of the Soviet era. Lenin’s embalmed body has lain for more than 80 years in a marble mausoleum. The preservation of his body has been managed by scientists from the Center of Biomedical Technologies at the All-Russian Institute of Medicinal and Aromatic Plants (VILAR). The Mausoleum is closed every 18 months so that these scientists can perform various prophylactic procedures on Lenin’s remains.

Two days after Lenin’s death on 21 January 1924, Felix Dzerzhinsky, chairman of the funeral committee created by the Politburo, said: “If science permits, Lenin’s body must be preserved.”
Scientists were assigned the very difficult task of embalming Lenin’s body so that in death he would continue to look as he had in the portraits made of him during his lifetime. Existing methods were inadequate. Some methods would allow the body to be preserved, but only for a short time. Others, including those used by the ancient Egyptians, would not preserve the life likeness. While Soviet scientists pondered the task Dzerzhinsky had set them, the pathologist-anatomist Aleksei Abrikosov was charged with embalming the body of Vladimir Ilyich. When asked in a newspaper interview whether one could treat the body in such a way as to preserve Lenin’s likeness in life, Abrikosov’s reply was categorical: “Science today has no such means.” The interview was read by Vladimir Vorobiev, a professor of anatomy in Kharkov, who disagreed: “Many anatomical compounds can be preserved for decades; this means we can try and apply them to an entire body.”

Lenin’s body was initially placed in a wooden crypt designed by the architect Aleksei Shchusev (who also designed the marble- and granite-faced tomb that replaced the crypt in 1930.) But spring was not far off, the weather was becoming warm, and preserving Lenin’s remains more and more difficult. Signs of decay and desiccation began to appear on the body. The decision was taken to freeze the body with the aid of special freezing equipment. But the equipment ordered from Germany was slow to arrive and the body began to decompose. What to do? Professor Vorobiev was summoned to Moscow from Kharkov and charged with embalming Lenin’s remains. The body was soaked for a long time in a special solution that contained glycerine and drops of acetate. The parchment-like spots that had appeared on the body were removed with acetic acid and hydrogen peroxide. To keep the eye sockets from collapsing, artificial eyes were made to replace the original pair. Before allowing the body to go on public display, it was shown on June 18 to Lenin’s brother Dmitry Ulyanov and widow Nadezhda Krupskaya. (Krupskaya had at first been adamantly against the embalming.)

Thereafter Lenin’s body was removed from view every 18 months and again soaked in the special embalming solution. When the Second World War began the body was evacuated by train to Tyumen, some 1,200 miles east of Moscow. The coffin containing the body traveled in a separate refrigerated car; the scientists responsible for the body’s care rode in another car along with 40 soldiers and officers from the Kremlin garrison.

The body, its service staff and escorts returned to Moscow in late March 1945. The body was now dressed in a three-piece suit. Before the war, the body had appeared in a semi-military field jacket (though Lenin had never worn such a jacket in life) decorated with an Order of the Red Star. Legend had it that the Order belonged to an unknown veteran of the Russian Civil War. Supposedly this veteran, when he visited the Tomb, was so moved by the sight of Lenin that he unpinned his Order from his chest and pinned it to Lenin’s field jacket. However, when the number on the Order was checked it turned out that it belonged to the German revolutionary Klara Zetkin.

More than 80 years have gone by. Lenin’s body is well preserved, thanks to the efforts of scientists, and remains on display in the Mausoleum on Red Square. Every 18 months the Tomb is closed for prophylactic procedures on the body… It is not impossible that one day Nadezhda Kruspkaya’s request will be honored and her husband’s body committed to the earth. But not today. Russian society is still not ready. In a VTsIOM opinion poll conducted in 2009, over 40% of the respondents considered the preservation of Lenin’s body in the Mausoleum on Red Square incorrect and unnatural. But 52% saw nothing wrong with it.