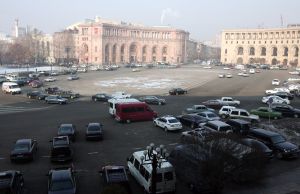 The “Armenian question” is once again in the press after the Foreign Affairs Committee of the US House of Representatives passed a draft resolution recognizing the 1915 genocide of Armenians by the Ottoman Empire. This is not the first time that US Representatives have spoken in favor of labeling the tragic events of a century ago “genocide.” A similar draft resolution was approved by the same committee on Oct. 10, 2007. However, the current discussion of the “Armenian question” in the US Congress differs fundamentally from that of three years ago.

Relations between Armenia and Turkey since 2007 have witnessed such events as “soccer diplomacy.” Serzh Sarkisian became the first Armenian head of state to travel to Turkey when he attended a soccer game between the two countries’ national teams. The two countries also signed a “road map” to normalize relations, and they jointly accepted legally binding protocols to open a land border and establish normal diplomatic relations. But the subsequent Armenian-Turkish normalization has showed that the signing of important official documents and the overcoming of past stereotypes and phobias are not the same thing. The reaction over the recognition of the genocide is indicative of this. Right after the House committee vote, US Secretary of State Hillary Clinton said that it could endanger the Armenian-Turkish dialogue.

Both Armenia and Turkey have basic principles through which they look at the deaths of Ottoman Armenians in 1915. In Armenia, they are categorically defined as genocide. As Yerevan-based expert Alexander Iskandarian has said: “To say that the question of recognizing the genocide is a matter of internal political dissent would be untrue, since in the Armenian political landscape there are no significant political forces that consider this problem in any other way.”

In Turkey, there is a broader spectrum of approaches, from complete denial and the placing of blame for those tragic events on the Armenians, to the search for a serious counterargument that would allow guilt to be placed on the Ottoman Empire, but not the modern-day Turkish Republic. Proponents of a strict legal division of responsibility between imperial and republican Turkey are known in national historiography as “liberals.” In the words of Turkish historian Halil Berktay: “The republic does not bear responsibility for these events. Today the Turkish republic can say one very simple thing: The republic was founded in 1923. These events took place in 1915. The army of the Turkish republic and its state institutions were not involved in these events. The Turkish republic is a new state. From a legal standpoint, it is a successor neither of the Ottoman government nor of the Committee of Union and Progress [known as the Young Turks].” In the opinion of other Turkish experts like Bulent Aras, associate professor of international relations at Isik University, and Havva Karakash-Kelesh, a researcher at Fatih University in Istanbul, the system of super-ethnic values built by the Turkish Republic, beginning from the time of its founding by Kemal Ataturk, does not allow Turks to talk about “ethno-national diversity.” Given this, it as difficult to stress excesses with respect to various ethnic minorities now as it was in the past. This relates not only to the Armenians, but also to the Greeks of Asia Minor – the Assyrians and the Kurds.

Meanwhile, significant shifts have been made on the “Armenian question” in Turkey in recent years. After Turkish-born Armenian journalist Hrant Dink was murdered in Turkey in 2007, there was outrage among state officials and society alike. Dink’s murder was seen as a challenge to the Turkish Republic by Prime Minister Recep Tayyip Erdogan, and by the tens of thousands of mourners at his funeral who chanted, “We’re all Armenians.” Another example is the restoration work done at the medieval Armenian monastery on the island of Ahtamar, although Armenian restorers were not allowed to work there. Additionally, there have been several books published by both Turkish and Armenia authors dealing directly with the genocide. And, lecturers in Turkish universities today include ethnic Armenians who analyze the historiography of this complex question. The most famous example of this is lectures of University of Michigan Professor Ronald Grigor Suny at Koc University in Istanbul. Such a thing would have been unthinkable only a few years ago.

However, despite these moves towards a reconciliation with Armenia, Turkey still responds negatively to any declarations, decisions or statements by foreign officials, especially when they come from Washington, which Ankara considers a strategic ally. Indeed, the United States has a military base in Turkey that plays a key role in American operations in Iraq and Afghanistan. More than 70 percent of the US cargo flown into Iraq arrives via Turkey.

More than 20 countries, including Russia, France, Argentina, Canada, Greece, Cyprus, and Uruguay, have recognized the genocide of Armenians. Within the United States, 44 of the 50 states have done the same. However, serious barriers still remain for the events of 1915 to be declared genocide at the national level. In speeches to the Armenian community, US presidents regularly recall the victims of the events of 1915, but not one of them has uttered the word so important for the Armenian diaspora: “Genocide.” Last year, President Barack Obama called the events of 1915 “a great tragedy,” a description that is customary in Armenian historiography and political commentary. But strategic considerations in Middle East policy invariably compel the White House and the State Department to try and cool the fervor of US congressmen, senators and state representatives.

At first glance it might seem that Ankara could push the events off on the past. It need only develop the thesis of “liberal” Turkish historians, who hold that the republic is not a legal successor to the empire, and blame the accursed “Ottoman past” during which the genocide of Armenians was possible. However, the question of genocide is not a debate among historians, but a pressing foreign policy problem. Especially since Ankara, given its complicated relations historically with Greeks and Arabs, would not like to create unnecessary precedents.

Turkish diplomats will likely try to turn the recognition into an object of political barter. Turkey, as a strategic partner of Azerbaijan, could offer to recognize the genocide in exchange for concessions from Armenia on Nagorno-Karabakh; or, alternatively, Ankara could tell Washington to back off the “Armenian question” in return for keeping its military base at Indjirlik.
But for now, the question of Armenian-Turkish reconciliation and a resolution of the longstanding Nagorno-Karabakh conflict remain the ghosts of the 20th century haunting the 21st.

Sergei Markedonov is a political scientist and expert on the Caucasus and Central Asia.


The US has inched toward recognizing the genocide against the Armenians. Peter Lavelle, host of CrossTalk, asks his guests why Turkey has problems confronting its history.