The companies that Russia keeps 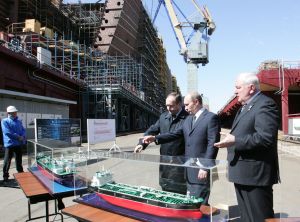 The Russian state is seeking to reduce its level of ownership in the economy over the next few years. Whilst some are sceptical, the government has always claimed that privatisation remains the plan.

In contrast to the prevailing wisdom further west, privatization remains a dirty word for many Russians. The chaos following the collapse of the Soviet Union, the economic shocks of sudden market liberalization and the privatization rackets that created the oligarchal clans reach deep into the Russian psyche. Yet it is only the latter - which saw state assets worth billions swapped for a handful of change in the 1990s - that still taunts from the TV and front pages on a daily basis.

Still, the current political leadership has always claimed that it believes private companies should dominate the economy, even as it has overseen an expansion of state ownership. Hence, the announcement in late autumn of a wave of privatization kicking off in 2010 is consistent with stated intentions, even if on the ground it signals a distinct policy shift from what has happened over the last decade. In September, First Deputy Prime Minister Igor Shuvalov predicted as many as 5,500 companies could be privatized (at least partially) over the coming years, with 449 due on the block in 2010. In February, he announced that the privatization plan for this year is to be substantially expanded.

It's worth noting that the original numbers include a host of barely functioning enterprises that have been on the table for years without any takers. While a selection of more interesting assets are now also about to come up for grabs, the investment community will have to wait to get their hands on a larger slice of the crown jewels they covet: oil and gas, banking and other blue chips.

Amongs the most attractive companies that are now definite privatization targets (for example, the utility TGK-5 and three large insurers), the government will be relinquishing no more than a minority interest or blocking stakes, suggesting the sales may do little to improve free floats or liquidity. Of those with full state ownership certain to go under the hammer, perhaps only construction company Mosmetrostroi will be able to provoke any great interest.

However, a second list of names has also been made public. This includes a handful of the largest shipping and transport infrastructure companies in Russia. The potential of this segment stems from the economy's reliance on bulk exports - not only oil, but metals and mining products, grain and timber, to name but a few - and hence the stakes in Murmansk and Novorossiysk Sea Ports and the Sovkomflot shipping line are likely to rouse the most interest among investors. Yet these assets need to come to the market first. This is not yet guaranteed, as they currently sit on the list of strategic assets in which foreign ownership is restricted. It's the task of President Dmitry Medvedev to get these stricken from the list - a task he's yet to achieve.

Presumably, good cop Medvedev is working on this now - although as ever, the gap between policy and implementation appears wide. The president continues to push his liberalizing agenda, however. Ivan Ivanchenko, chief strategist and economist at VTB Capital, suggests the political leadership had to pause while it consolidated the breadth of political power needed to push through unpopular moves, such as privatization.

"The crisis only strengthened the authorities' urgency to escape the oil hook," said Ivanchenko. Hence, in February, Medvedev released a list of initiatives and deadlines aimed at improving the investment climate in Russia. This includes demands for penalties against officials that obstruct investment policy and projects, as well as a mid-March deadline for suggestions of further "major and strategic" compnies to be included in the privatization drive.

Privatization is one of the few levers that can help attract foreign direct investment (FDI) into Russia at the moment. This was not always the case though, and state ownership in Russia's economy has increased substantially since 2004 - from 25-30 percent to over 50 percent, according to most estimates. To no small extent this has been the result of a concerted effort to reclaim assets lost to the oligarchs all those years ago - although the campaign was carried out ruthlessly and with little pretense of even-handedness.

This process in effect accelerated during the recent economic crisis as the government bailed out over-leveraged corporations. On a practical level, however, this action was little different to the bailouts seen across the globe. Once again, Prime Minister Vladimir Putin insisted throughout that the state had absolutely no interest in nationalizing the assets. More recently, Finance Minister Alexei Kudrin has pledged that state interest in the enterprise sector will shrink to 30 percent in the coming years. The challenge is to push this past the vested interests in the Kremlin, bureaucracy and business world.

Some claim that rather than a commitment to loosen the state's grip on the economy, it's simply financial straits fueling the latest privatization drive. Kudrin anticipates a budget deficit of around 6.8 percent this year, following 5.9 percent in 2009. While every little may help, the $2.4 billion expexted to be gained from privatization in 2010 can hardly combat a deficit of $100 billion. The theory looks even less convincing considering that Russia is preparing its first overseas bond issue since 1998 (although few expect to see the country raise the full $18 billion debt mentioned in the 2010 budget). Adding to the confusion, Russia also holds the third largest sovereign wealth fund in the world, with around $400 billion tucked away.

A need for cash in a different context, however, looks a viable driver for the inclusion of several transport assets from the strategic enterprises list. In the boom years immediately prior to the crisis, the state's emphasis was fixed firmly on Russia's ailing infrastructure, with promises of a gigantic $1 trillion of investment. The electricity sector was the priority, with cash desperately needed to renew grid infrastructure and build extra capacity; lo and behold, the sector saw significant privatization starting in 2007. While Russian and foreign corporations were fighting over power assets, the statements issuing from the authorities turned the spotlight onto transport.

Of course the crisis turned these plans to dust. The private owners of power sector assets are now facing increasing pressure from the state to honor the massive capital expenditure pledges they made at the time of purchase; meanwhile, state spending has been diverted to ensure social, and therefore political, stability. Hence investors are to be invited to start the ball rolling again on rebuilding the country's infrastructure.

At the same time, the political leadership knows that money on its own won't be enough. As a government source told local media recently: "It's obvious to everyone that [the enterprises under government oversight] are excessive. It's impossible to manage this huge mass effectively."

Private management, as well as foreign expertise and technology, are cornerstones of the Kremlin's struggle to diversify and modernise the economy. This tallies with the speculation of Angelika Henkel of Alfa Bank that most of the named companies "are better candidates for buy out by strategic investors that already have a significant interest in them." The 25 percent-plus-one-share government stake in TGK-5, for instance, is widely expected to end up in the hands of major stakeholder KES-Holding, while the 25 percent stake in shipping company Sovkomflot is another likely to head to a working partner.

In fact, few of the named companies look set to float on the Russian or international bourses, despite Kudrin's claim in December that the majority of coming privatizations would not be via "a sale of stakes, with the proceeds going into the budget, but... IPO." For example, while a company such as Mosmetrostroi could prove attractive, the 100 percent the government is looking to unload would stretch the capacity of fund inflows to Russia, and struggle to compete with established publicly-traded companies.

Therefore, although the government clearly hopes to score PR points from its privatization drive (the Financial Times quotes a government official suggesting that the move will "show the world the liberalism of the government"), many in the international investment community apparently remain under-whelmed by the names listed to date.

Not on the cheap

How quickly the state will put the bigger prizes on the block remains a big question. The invite to become more deeply involved in Russia's state giants and other attractive assets will have to wait until the political leadership manages to push it past vested interests - including that within its own ranks - as well as carry out the necessary restructuring. It also won't come until investment flows and risk appetite perk up. As with governments across the globe now holding major assets, the Russian authorities have no intention of letting them go on the cheap.

Not up for discussion, however, is majority control in the country's largest companies. This issue gets commentators stewing like few others, and indeed, minority shareholder rights are commonly ridden over roughshod in Russia. In response, Ivanchenko claims that legal action by investors is meeting more success recently: "things are getting better, slowly."

At the same time, Russia's state behemoths offer such steady and attractive returns that few fund mangers can summon up the idealism to blacklist them. Besides, in a country in which businesses are so often stalked by corruption and criminality, perhaps the safest place is in bed with the state.