The Joseph Brodsky in my mind 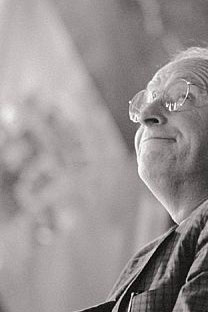 Joseph Brodsky won the Nobel Prize for Literature in 1987and was U.S. Poet Laureate in 1991

Dmitry Bykov, one of Russia's acclaimed living poets, explores the specter of larger-than-life poet Joseph Brodsky. When asked if he was Russian or American, Brodsky replied that he was Jewish, a Russian poet and an English essayist.

There were no poets in Russia who didn’t want to meet Brodsky, regardless of their personal feelings about him. Many would even sell their souls—or at least a kidney—for the right to say: “And at that point, Brodsky said to me...”

I very much wanted to read my poems to Brodsky. To be honest, I didn’t even hope for his approval: I think Brodsky didn’t care much about anyone else’s verse. But I was fond of him and wanted to see him in everyday life.
A man is weak, and when I travelled to the United States in 1994 I had an underlying, shameful and unrealistic desire to see him even if from afar, he who wrote, “As long as you remained with me, I knew that I existed.” For some personal reasons, I myself doubted my existence at the time, and Brodsky was a great consolation to me.

I had a commission from Peter Vail, writer, journalist and a close friend of Joseph Brodsky. Vail mentioned me in one of his articles, which offered a sufficient pretext to seek a short visit with the maestro.

We met with Vail in a small cafe not far from my hotel, and I began to make overtures about Brodsky.

“And what about Brodsky,” I asked carelessly. “Isn’t he planning a new book?”

“Yes, indeed, he has a lot of new stuff,” confirmed Vail. “Great poems, very different from what he wrote before,” he said, noting that he had heard some of them recited by the author recently. At these words, Vail grew a couple of inches taller in my eyes.

“Does he receive any visitors?”

“He is an open man, it is quite easy to meet him. He may come to visit me soon, and I will invite you,” Vail promised.

This prospect dazzled me for three whole days, during which I imagined three scenarios.

Scenario No. 1, the best one. Vail invites me, Brodsky arrives, everyone says “aah,” and a cozy party transpires. There’s a general conversation, then Brodsky recites something new, and then the kind Vail says: “And now, let Bykov read us something.” I am happy beyond words and read something, Brodsky smiles in a friendly fashion and says “not bad, not bad,” adding, in his manner, a couple of theoretical ideas about the poet as a tool of language. I fly to the Sheraton Manhattan on the wings of happiness, in my sweaty hands grasping a copy of “To Urania” (selected poems by Brodsky), signed by Brodsky himself in an original manner like “for good memories, from the author.” A place in Russian literature would be secured.

Scenario No. 2, awful. Brodsky is in a bad mood. I recite, he puts me down, and I—the most terrible thing—nod my head, smile and agree, in my usual manner. Die, Dmitry, stop writing.

Scenario No. 3, the worst one. A general conversation, I feel awkward and out of place in this brilliant society. Then out of politeness, I am asked to read something. I read, trying not to look at anyone. A short pause, and the conversation resumes, as if I was not there. I go to the Sheraton Manhattan. It is a problem to buy a bottle of alcohol in New York after 9 p.m., and this idea drives me to despair in advance.

The saddest thing was that after that I would never again like Brodsky’s poems: A man is weak.

Finally, Vail called me and said he wanted me to pass on a modest gift to a mutual friend in Moscow. We met three days before my departure, in a cafe across from a bookstore.

“Why didn’t you call?” Vail asked smiling. “Joseph was at my place the day before yesterday."

“And how is he?” I asked, in as careless a tone as I could manage.

“Well, he read, we talked, and the next day he left for Europe, for Sweden.”

“So when will he return?” I asked in a broken voice.

“In a couple of months.”

I saw Brodsky in a dream only once since then, shortly after his death. I saw him in rather a strange interior: a well-lit room, all the walls covered with bookshelves, from floor to ceiling. There was also a ladder to get to the top shelves. Brodsky was very friendly, treating me to tea and talking about something upbeat and pleasant, and I felt joyous. This dream is easy to explain. One author said that after Brodsky’s death, however cold and reserved he may have seemed, however distant he looked, we all had a feeling of great personal loss: It is the everyday conscience of the intelligentsia—mine, yours, ours—that he brought to literature. Besides, his work concerned everyone in the writing world, we all wanted to know what he was doing. Finally, a vast portion of my life passed against the background of his poems; so, it is only natural that, severe and unreachable in life, he became very close, almost like a relative, after his death. Awful if you think about it.

Only once in my life I had the feeling of a personal meeting with Brodsky. It was when I was leaving the United States on a plane, realizing that I would not return anytime soon. The plane engine sounded like a men’s choir, and, to this underlying rhythm, I chanted in my mind:

Birth I gave you in a desert
not by chance,
for no king would ever hazard
its expanse.

It was late Brodsky, different from both the mature and young poet. He grew softer, for a moment, returning to traditional meter:

Grow accustomed to the desert
as to fate,
lest you find it omnipresent
much too late.

At this point I was very happy that I did not see Brodsky, allowing these divine lines to remain pure, clear and, in the highest sense, anonymous, free of any authorship. Indeed, one can easily imagine a lamp behind the window.

Just a lamp to guide
the treasured
child who’s late,
lit by someone whom that desert
taught to wait.

Dmitry Bykov is a modern Russian poet and TV presenter.