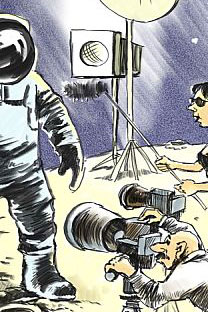 Undoubtedly, the proliferation of conspiracy theories is in part a reflection of distrust for information available in the Russian media, widely regarded as being under the thumb of the state, as it has been for much of history. This points to a profound problem facing Russian political life. Civil Society 101: Participatory democracy depends on a broadly shared view of reality, and therefore on trusted institutions of journalism and mass media. Russia’s progress toward democratic politics is dependent on overcoming widespread skepticism concerning “the official story.”

This knotty set of problems came into sharp focus for me this past December when I was attending a conference in St. Petersburg. My stay coincided with the bomb attack on the Nevsky Express train on Nov. 27. My interest in this incident was acute, given that I was myself scheduled to take a night train to Moscow on Nov. 30. I was struck, first of all, by the level of scrutiny that everyone brought to bear on news reports: Interfax reported a crater at the site, but Reuters did not; officials called the event a terrorist attack, but others were blaming possible mechanical failures. Conversations during coffee breaks at the conference I attended almost always shaded over into rumor and conjecture. Some theorized that the terror story was a cover-up to conceal human errors that caused the event. Others believed that there had been a bomb, but thought it had been either planted by the Russian state security forces, ordered up by someone in power from terrorists for hire, or simply set off with the tacit approval of the powers-that-be.

Conspiracy theories are not a uniquely Russian phenomenon. We have plenty of them in the United States. What I found stunning, however, was how rapidly these theories bubbled up and circulated among privileged, educated Russians—university professors and professionals—the people with whom I come into contact. To understand this state of affairs, I turn to history. Public information in the Soviet Union was tightly controlled in order to suppress any story that did not coincide with the party-approved version of reality—to the extent that the Chernobyl nuclear accident of 1986, a public health disaster that affected millions, was not reported until foreign news broadcasts into the U.S.S.R. made it impossible to ignore. (For a fictional account of Soviet journalistic practices, I recommend Sergei Dovlatov’s hilarious story cycle, “The Compromise.”)

The late 1980s and early 1990s saw a surge of novel media outlets and a new freedom of expression. However, beginning with the 1996 elections, the Yeltsin administration, fearful of losing power to the communist opposition, began to reassert state control over news media, especially television. Since then, this trend has brought steadily increasing control by the state or by corporate interests close to the state in nearly all sources of public information. This is not to say that journalistic standards have gone completely to the wayside. It’s just that some topics and political positions are simply not allowed in Russian media today. Given this history and reality, it is hardly surprising that Russians are in general distrustful of the news.

By some coincidence, my trip to Russia also coincided with a congress of European and Asian media in Moscow. On Dec. 9, Dmitry Medvedev addressed 300 representatives of Russian and foreign media and news organizations. According to leading Russian newspaper Kommersant, one of the main topics of discussion at the congress was the question of regaining public trust “lost during the post-Soviet period.” (No mention was made of the trust lost during the Soviet period.) At some point in the question-and-answer period following Medvedev’s remarks to the assembly, he announced that Russia “has no problem with freedom of speech.” It seems that this, however, was not the main topic dealt with at the congress. Discussion with Medvedev was apparently more fully engaged with problems of new media, social networking and blogging. When Medvedev noted that he himself writes a blog, participants in the congress pointed out that he could be seen as just one more media professional. Medvedev’s response: “Well that ups my level of responsibility.”

The responsibility of the representatives of state regarding public perceptions of the media in Russia is indeed great. But, frankly speaking, Medvedev’s “professional” involvement in Russian media institutions is more a problem than a solution. What Russia really requires, if it is to overcome pervasive distrust of official news sources, is a huge decrease in the “responsibility” of the state for what goes on in the media. Without journalism that is truly independent of state oversight and intervention, Russians will be condemned to live in a world where every news report is suspect—was it purchased, fabricated or aired in the interests of appeasing the powerful? In such a world, your theory of events, no matter how far out or crazy, is just as good as mine. The implications for public opinion regarding policy, for commonly shared social values, or for true political consensus are obvious. Of course, one can always simply announce a degree of public unity in a blog entry. But who will believe that story?

Kevin M. F. Platt is an associate professor of Slavic languages and literatures and the graduate chair of the Comparative Literature Program at the University of Pennsylvania.