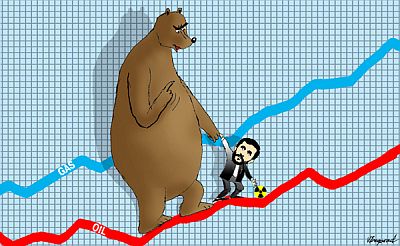 Iran is fast becoming one of Russia's best business clients. While Russia is not entirely comfortable with Iran acquiring advanced nuclear technology and is concerned about combating terrorism, Russia is more concerned about becoming a broker in the Middle East, independent of the West. Strategic economic relations with Iran are quickly becoming a top priority.

Last month, Oleg Rozhkov, the deputy director of the Russian Foreign Ministry’s security affairs and disarmament department, made it clear that Russia would only consider sanctions against Iran that are “directed at resolving nonproliferation questions linked to Iran’s nuclear program.” Rozhkov further mentioned to reporters in Moscow that “we are not going to work on sanctions or measures which could lead to the political or economic or financial isolation of this country.”

Since it is established that Iran holds 16 percent of the world’s gas reserves and 11 percent of the world’s oil reserves, Iran’s oil and gas sectors offer many opportunities for Russian investment, from government agencies down to private entrepreneurs. As Russia seeks to cultivate Iran and competes for influence in the Middle East, Iran and Russia have held high-level discussions on coordination of Iranian gas exports with Gazprom, Russia’s largest state-owned oil and gas conglomerate. Such a deal shuts the United States and Western Europe out of the competition for these increasingly valuable natural resources, and further encourages the development of a potential strategic alliance between Iran and Russia. However, Russia could become a major player in this region over the next several years by helping Iran to develop newer oil supplies and to increase the productivity of its older oil fields, assisting Iran in achieving its objective as an exporter of natural gas.

Consequently, to help its cash-strapped military and nuclear establishment, Russia has sold submarines and weapons to Iran and signed a contract to construct a civilian nuclear reactor in Bushehr, which was eventually sold for $800 million. This allowed Russia to cut a deal with Iran by promising to give them a favorable price on fuel if Iran would allow Russia to help build and improve infrastructure.

Since NATO’s decision to admit new Eastern European members, Russian hard-liners have consistently and successfully pressured the Russian government to respond by forming new alliances with Iran and emerging Third World countries. Furthermore, Russia subscribes to the belief that easing sanctions on oil and gas and allowing banking activities with Iran will serve to further Russia’s interest in the development of oil in the Caspian Sea, which would boost Russia’s exports to Asia and help to stabilize oil supplies and prices worldwide.

At a time when countries are competing among themselves to ensure more diverse and reliable sources of energy, Russia views Iran as a vehicle for the improvement of Russia’s economy, which deteriorated rapidly during the transition from the Soviet era to today’s quasi capitalism. Allowing a Russian company, like Gazprom, to coordinate petroleum exports in Iran reinforces Russia’s belief that Iran is verging on client status, whose continued cooperation is critical for stability in the Middle East and for the protection of Russian influence in that region. This attitude is reinforced by the attempt on the part of the United States to assist ex-Soviet states, which rely on Russian pipelines to export their oil and gas, to build oil and gas pipelines that are outside the control of Russia. Moscow believes this to be a deliberate attempt by the West to isolate and weaken Russia. Thus, the strategic relationship between Iran and Russia reinforces Russia’s economic interests.

As Russia and Iran together control over 20 percent of the world’s oil reserves and nearly half of the world’s gas reserves, a strong and viable strategic relationship, guided by mutually beneficial economic interests, may serve to prevent Iranian energy resources from falling into the hands of the United States and European consumers. At the same time, financing profitable projects, like Gazprom, will create a greater level of dependence by many Asian countries, including China, on Iran. This would greatly aid Russia in achieving its goal of once again becoming a global superpower by focusing on the areas of trade, investment and military capabilities in the Middle East.

Since sanctions on Iran have diminished expectations of Western investment in that country, American engagement, which has traditionally been very effective in allowing the private sector to invest in countries like Iran and make American products and ideas available, has no practical applicability toward changing the mindset of the hard-line fundamentalist regime. Shutting the United States out of the ability to develop Iran’s vast oil and gas reserves prevents the United States from being recognized as a geo-political player in this region and plays strongly in Russia’s favor. Unlike the United States, Russia chooses to focus on energy and economic interests, thereby creating a formidable strategic and economic relationship between Iran and Russia that might change the dynamics of the Middle East.