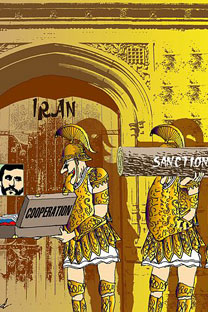 The recent nuclear swap' deal between Turkey, Brazil and Iran - as well as impending sanctions against the Islamic Republic - have grabbed the attention of politicians and political analysts from all over the world. Iran's nuclear program, along with the Afghan problem and continuing conflict between Israel and Palestine, has risen to the top of the global political agenda. Meanwhile, the Iranian issue is much broader and far-reaching than a desire to obtain a nuclear bomb.

Iran remains “the exporter of the Islamic Revolution,” supports a number of Islamic terrorist groups and is a consistent enemy of the United States and Israel. Revealing Iran’s geopolitical ambitions, Ali Khamenei’s official Web site defines his position not as Rahbar (Supreme Leader of Iran), but as the Supreme Leader of Muslims. The 2006 Lebanon War, along with the Israel-Hamas standoff in December 2008, clearly demonstrated Iran’s rising geopolitical potential. Indeed, Iran’s impressive victory in 2006—in fact, Israel’s first military defeat since the creation of the Jewish state—testified to Iran’s ability to lead a successful proxy war against its enemies. The December 2008 events also showed that Iran isn’t going to confine itself to official Shia doctrine in the interpretation of Ali Khamenei. Iran is claiming a leading role not just in the Shia community but in the entire Islamic world. Accordingly, it provides financial support not just to the Shiite Hezbollah but also to the Sunni Hamas, reviewing its ideology to embrace the ideas of integration.

Yet, highly competitive presidential and parliamentary elections are regularly held in Iran, with the final results, and aftermath, unpredictable. This was also the case in the last election in June 2009 (the 10th election following the Iranian Revolution of 1979), when the victory of Mahmoud Ahmadinejad spurred mass protests from supporters of his chief rival, former Prime Minister Mir-Hossein Mousavi. Ali Khamenei sees democratic elections as a tool to promote Islamic values.

In this respect, political analysts from both Russia and the West face the difficult task of developing a realistic picture of the country that plays a crucial role in solving each of the key problems in the Middle East (Lebanon, Palestine, Iraq) and in ensuring security in Afghanistan, Central Asia and the Caucasus. To do so, it is necessary to stop seeing Iran’s internal and foreign policy as determined by purely ideological concerns. Indeed, Iran is consistently fighting against “the Great Satan” (the United States) and the “Zionist Threat” (Israel). Yet, for all its aggression and assertiveness, Iran’s policy shows strong signs of restraint.

On many occasions, Iran showed that national interests take priority over religious purity. In fact, Iran, along with Georgia, is the only “window into the world” for Armenia, blockaded by Turkey and Azerbaijan. Another Caucasian example is Iran’s relations with Muslim Azerbaijan (both countries are predominantly Shiite), which have not always been smooth following the collapse of the Soviet Union. Tensions were caused by a variety of factors, including Azerbaijan’s ties with Iran’s strategic rival Turkey, the problem of the Azeri minority in Iran and Azerbaijan’s interest in Israel and the Israeli lobby in the United States as a counterweight to Armenian influence.

Iran has been just as pragmatic on the Central Asian front, too. It was largely thanks to Iran’s efforts that the first ceasefire agreement was signed between Muslims and secular authorities during the Tajik Civil War of 1992–1997. Thus, supporting stability in Persian-speaking Tajikistan proved more important for Iran than its Islamic project. In Afghanistan, Iran also pursued pragmatism. From the very start of the Afghan recovery, the Iranian Revolution took center stage in this process, along with the West. From 2002 to 2004, Iran’s financial aid accounted for 46.1 percent of total funds allocated for the restoration of the Afghan economy, ruined by years of fighting.

Tehran’s relations with Moscow also reveal Iran’s controversial approach. Iranian officials tend to present the Chechen problem and the situation in Dagestan in terms of religious radicalism in Russia’s North Caucasus caused not by the Shia but by Salafism, which is widespread in Saudi Arabia, Iran’s long-term ideological rival. At the same time, radical Islamic groups (such as Hezbollah), supported by Iran all over the world, see Chechnya as part of “global jihad,” while viewing religious extremists from the North Caucasus as religious fighters. It is this that hinders strategic cooperation between Tehran and Moscow.

Thus, Iran pursues a multilevel foreign policy, with its warlike rhetoric often covering pragmatic reasons and constructive behavior. In this situation, focus on sanctions cannot produce effective results. For all the difference among Iranian politicians, with Ahmadinejad, Mousavi and Rafsanjani each having distinct agendas, a consensus has been reached on Iran’s geopolitical independence: Both conservatives and moderate liberals want to see Iran as a regional superpower. Meanwhile, there’s a risk that external pressure will only serve to unite the Iranians based on patriotic ideology. Therefore, another strategy appears to be more effective: to engage Iran in important international projects. The Afghan recovery seems the most urgent and the most realistic goal. It will help better control Iran’s behavior, while stimulating resources for internal transformation in Iran. In this case, the external threat will be minimized, allowing reformists to use the whole arsenal of pragmatic and constructive tools in Iranian policy. It is within this scenario that Iran may revise its foreign policy priorities.

Sergei Markedonov is a leading political analyst specializing in the Caucasus.