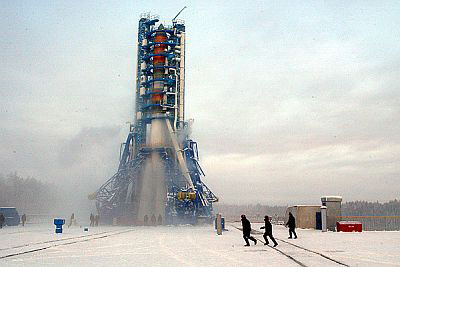 While Russia burns with ambition again, the United States has grown ambivalent about space exploration.
On April 2, new Soyuz crew members, two Russians and one American, are scheduled to launch from the Baikonur Cosmodrome in Kazakhstan. Circling the planet, the crew will engage in intense cooperation unknown on the ground.

Down on earth, Russian-American space cooperation has increased, but there is also unease as the power of the players is shifting. Russia will fuel space exploration once again, while the U.S. vision appears dampened.

America is relying more and more on the Russian federal space program for key assistance. As the United States reprioritizes its programs, the country will rely on Russia to take its astronauts into space.

NASA has long spent more money on more programs than Russia’s space agency. But President Barack Obama has slashed NASA’s dreams of going to the moon again. Building new spacecraft for the exploration of Mars is again a flight of fancy.

At the same time, the Russian space industry is feeling the warm glow of state backing once again. There has been concerted investment in recent years, an investment that fits in well with the Putin doctrine of trying to restore Russian pride through capacity.

And while both countries feel they are the front runners, their dominance could be challenged in the next decade by India and China as they fund their own programs.

The Russian government has increased spending on the space industry by a remarkable 40 percent for each of the past five years, spending $2.8 billion in 2009, Euroconsult reported.

President Putin launched an initial $10 billion program for the space industry between 2006 and 2015. When Putin congratulated space industry workers in 2008 on Cosmonauts' Day (April 12), he called on them to pursue “really ambitious projects.”

The U.S. Constellation human-flight program that Obama has all but abandoned was designed, according to President George W. Bush, to “establish an extended human presence on the Moon” that would then lead to flights to Mars. Obama cut it from the 2011 budget as the effects of the financial crisis continue to be felt and program expenditure soared. The government said that though NASA has already spent $9 billion on it, the program is “fundamentally unexecutable.”

Instead, America will look to private companies to invest in future spacecraft. In the meantime, U.S. astronauts will hitch a lift on Russian spacecraft, a move that has NASA supporters crying foul.

In the wake of recent criticism, Obama announced he will make a visit to Cape Canaveral, Fla., the home of NASA, in April. Russian and American space watchers wonder if this may herald another policy shift.

For now, the United States will rely solely on the Russian space program as the U.S. Shuttle retires from service. No private companies have so far secured investment for spacecraft, so this arrangement will likely continue for much longer.

Russian academic Yury Zaitsev told Interfax news agency that he thought the United States would be dependent on Russia to transport its astronauts until at least 2020. “In order to bring a craft to the standards of quality and safety for a piloted flight, you need years and years,” he said.

NASA has signed a $306 million contract with the Russian Federal Space Agency (Roscosmos) for U.S. astronauts to fly to the International Space Station in 2012.

While it is hard for some to get used to the power shifts, others support the new spirit of cooperation, a far cry from the start of the space race when new flights and feats in space were spurred by Cold War fear and one-upmanship as well as scientific endeavor.

Russian cosmonaut Oleg Kotov participates in a session of extravehicular activity (EVA) as maintenance and construction continue on the International Space Station.

When the Soviet Union put the first satellite in space in 1957, followed by the first man in space, Yuri Gagarin, in 1961, it sent a shock wave through American society. The space conquests of the U.S.S.R. pushed the United States to greater feats in space, such as the first man on the moon in 1969.

Cosmonauts' Day on April 12, the day of Gagarin’s first flight, is still celebrated in Russia, and last year Gagarin was chosen as the hero of the 20th century. The 50th anniversary of the flight will be celebrated in 2011, and the year has been renamed the year of the Russian cosmonaut.

There was a sense that Constellation could have been another opportunity for international cooperation. “It was maybe one of biggest mistakes not to make the project international,” said Lissov. “Then it would have been harder to close.”

Russia, too, must strategize its space agenda rather than burn with diffuse ambition. “Russia also needs to rethink its priorities,” said Valery Kabusov, a former deputy head of Energiya, Russia’s rocket and space corporation.
“We have to have a clear idea of the aims,” said Kabusov. “I think we have to work out and think about the idea of further planned manned flight in space.”

The closing down of Constellation comes as Russia and the United States are wary of China and India, who have been pouring money into their own space programs. The Chinese made a third launch of its Shenzhou VII spacecraft and also their first spacewalk in 2008, while India is planning a manned flight by 2014.

“We are a little envious of China,” said Lissov. “They have a very accurate program and can go far.”

Some astronauts and cosmonauts suggest the kind of international cooperation found in the space station is the only way to keep the vision for space exploration moving forward. What if all space-exploring countries got together to send a human-flight to Mars?

Cosmonaut Alexander Serebrov flew into space three times for the Soviet Union and once for Russia. “I have thought all my life that a flight to Mars is a great opportunity for humankind to move forward. You can’t stop progress. That is impossible,” said Serebrov. “It has to be done through international cooperation.”

Perhaps because they have been lied to so many times, Russians are fond of conspiracies. And space has always been a place for those with especially fertile imaginations.

When Laika the dog was sent into orbit, his masters knew that she did not return alive but did not tell the Soviet public. Nor did they mention the other dogs who perished in the four-legged space race before her.

Alexander Serebrov is a scientist and a devout debunker of space myths, especially those connected to the lunar landing. He likes to explain why the American flag waved in space without wind.

And Serebrov likes nothing better than converting Russians who claim that the United States did not make it to the moon.

A more difficult myth to demolish is that astronauts came into contact with extraterrestrial life, from moon people to angels and even Porfiry Ivanov, a Russian mystic known for walking around in his shorts.

“When I tell Russians that it is all rubbish, they say, ‘How do you know, you were never on the moon!’ So I took Buzz Aldrin aside without the KGB or the CIA.”

He asked him one on one if there was anyone else on the moon.

“He said there were no moon people, no angels, and now I can tell the Russian people.” Buzz Aldrin closes the case.