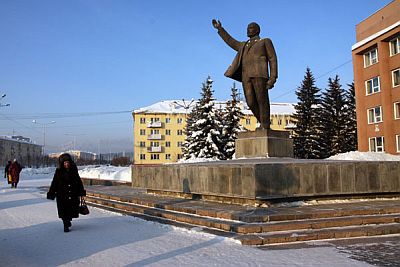 Despite changing times, Lenin still towers over the centralsquare of Zelenogorsk

Zelenogorsk, a remote center of nuclear technology, is a closed city with big ambitions. A French multinational has arrived with new technology and an eye toward renewable energy.

A Soviet-era nuclear plant in a closed city in Siberia is making a bid to be a player in the future of sustainable energy.

Since 1995, uranium enriched Zelenogorsk, a closed city that strongly evokes the Soviet era, has made fuel for nuclear reactors that supply Americans with electricity. Now it hopes that embracing a French company with new technology could lead to a more significant role.

During the Cold War, such cities, usually built around a single factory focusing on defense production, could not be found on any map, yet existed by the dozen across the former U.S.S.R. In striking contrast, French multinational Areva has recently opened a commercial facility in Zelenogorsk for the conversion and storage of depleted uranium, the first of its kind in Russia, and Areva’s first export of its technology abroad.

Zelenogorsk’s central square is still dominated by a statue of Lenin and looks no different from any other well-kept provincial Russian city. Yet, elements of Zelenogorsk remain clearly locked in time: One is struck by the absence of foreigners.

The city was founded in the mid-1950s as a facility far from national borders for enriching uranium at the dawn of the nuclear age. The engineers who designed it were sworn to secrecy. Yet, the isolated residents of such closed cities enjoyed lifestyles, and consumer goods, well above the average in Soviet times.

The Zelenogorsk Electrochemical Plant was designed as a critical link in the process of nuclear power production. Once uranium is mined out of the ground, it undergoes a refining process followed by fluorination that results in conversion to a gaseous state. This gas, UF6, is then transported to facilities like the plant in Zelenogorsk, where it is enriched by increasing the percentage of the isotope U-235 compared to the major isotope U-238.

Zelenogorsk’s technology is state of the art for uranium enrichment and uses a large bank of centrifuges spinning at more than 1,500 rotations per second to separate U-235 from U-238. After enrichment, it is stored in gas cylinders and eventually converted into an oxide powder and shipped to nuclear power plants.

Avera CEO Michael McMurphy opened the new facility for the conversion and storage of depleted uranium tails, mainly U-238, left over from the enrichment process. This new technology will allow the U-238 to be safely stored in large quantities for extended periods of time. “When economic and technological opportunities dictate, it could be used for a variety of purposes in the future,” said McMurphy.

A closed cycle of energy

This resource could be one of the keys to sustainable—and renewable—nuclear energy.

According to experts at the International Atomic Energy Agency, U-238 is a fertile material and, in the blanket of fast reactors, it can capture excess neutrons, which convert the uranium to plutonium. The plutonium can be recycled in fast reactors, thus closing the nuclear fuel cycle. The result would be more energy value, and thus sutainable energy, than is currently used.

According to Randy Beatty, group leader of the International Project on Innovative Nuclear Reactors and Fuel Cycles at the IAEA, “such technology is at least several decades in the future. Such a reactor and the fuel cycle facilities would have to be operated remotely due to the high levels of radiation from the fission products in a fast reactor.”
Zelenogorsk and Avera are hopeful that when the technology is ready, they are ahead of the curve.