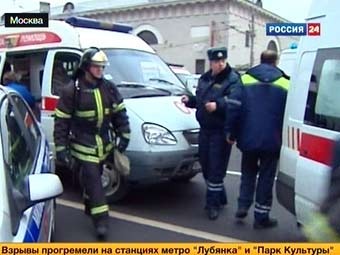 Two bombs have exploded in the Moscow metro and according to initial reports 38 have died and 64 were injured. The first blast hit the Lubyanka metro station, just up the hill from the Kremlin, at about 8am this morning.

A second blast went off 45 minutes later at the Park Kultury metro station where another 26 were reported killed and several dozen were injured.

Initial reports have blamed a suicide bomber for the blast at Lubyanka, but this report has not been substantiated.

The second bomb went off at Park Kultury just after the train pulled in to the station as the doors opened during killing 15 people on the train and 11 more died on platform, according to reports. Another 15 have been hospitalised according to the Emergency Ministry.

There is no indication yet of the cause of the blast and commentators are speculating this was the work of a suicide bomber but no details are available yet. Most are pointing out that because the two blasts are clearly coordinated this must be the work of terrorists.

The mood on the street is calm with people leaving the stations in an orderly way.

There are unconfirmed reports of a third blast according to reports, however the initial reports seem insubstantial.

Authorities have been blocking mobile phone signals near the affected stations as they believe there is a possibility that the blasts were triggered by phone calls.

The Park Kultury bomb went off on its Sokolnicheskaya Line platform (the red line). The train service on the station's other line, the circle line (brown), have not been affected.

Eyewitness accounts of the situation at Park Kultury say the mood was calm and there was no panic. The crowd was moved from the blast area either onto the circle line or onto the street as many rang friends and family to say they were all right.

The authorities have handed the situation very well according to reports, quickly evacuating the station. The ambulance and police arrived on the scene very fast and are currently sweeping the station for devices.

The wounded are being airlifted by helicopter to hospitals around the city as the roads around the affected stations have completely snarled up.

A major security operation is now currently underway and police are on high alert as all central stations are checked, but the metro service is still running more or less normally.

This morning's blast bare a lot similarity to a blast on February 6, 2004 when 41 people were killed and over 250 injured after an explosion ripped through a subway car in the Moscow metro during morning rush hour. Police confirmed that attack was the work of a suicide bomber and the authorities have blamed the attack on Chechen separatists.

At the time then President Vladimir Putin immediately blamed the blast on Chechen rebels and suggested that it was an attempt to put pressure on him ahead of his bid to be re-elected to his second term in office on March 14 that year, which he won.

That bomb was also detonated at about the same time — at 8:32 am - in the second car of a train heading north toward the city centre in crowded metro car travelling between the Avtozavodskaya and Paveletskaya stations - also hub stations in the system were crowds changing train are most concentrated. The force of the blast caused the car to swell and tore a hole in its roof, eyewitnesses said.

The most recently major metro attack was in the evening of August 31, 2007 when a blast outside the Rizhskaya metro killed some 10 people with dozens injured.

The most recently reported terrorist attach was a small bomb planted under rail tracks that derailed an express train heading from Moscow to St. Petersburg in August 2007. Twenty six people were killed and about a hundred wounded. The police are investigating the bomb as a terrorist attack.

There have been several bomb attacks on Moscow's metro since 1991 including blasts at Belaruskaya metro in 2001 when 26 were injured, no dead; at the Tretyakovskaya metro where three engineers were killed; and on the Serpukhovsky line in 1996 when four were killed and a dozen injured.