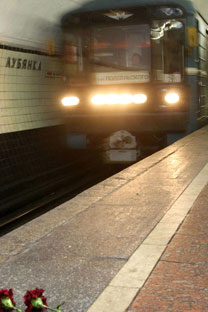 Two women suicide bombers killed at least 38 people and injured dozens of others in attacks on Moscow metro during yesterday’s rush hour.

The first blast hit the Lubyanka metro station at about 8am, killing 12 people and injuring a dozen more. A second blast went off 45 minutes later at the crowded Park Kultury metro station where another 26 were reported killed and several dozen were injured.

The attack is a renewed and brutal awakening to the conflicts, insurgency and grinding poverty in the Caucasus after a period of relative calm. But there were warning signs: In 2009, clashes between the government and militants increased in Dagestan, Ingushetia and Chechnya.

The question now is if these bombings mark the start of a renewed period of terrorism. The last terrorist act was in 2009, when a bomb derailed the Nevsky express train heading from Moscow to St Petersburg. Twenty six people were killed and about 100 wounded.
Russians and Muscovites are now wondering what will follow yesterday’s deadly attacks. The fear is that the unrest and Muslim insurgency in southern Russia would once again move into the country’s city streets.

Some commuters called for a government crackdown in the Caucasus.

“The federal authorities have increasingly relied on economic methods in dealing with the problems of the North Caucasus,” says Nikolai Petrov, a security analyst with Moscow’s Carnegie Centre. “An example is the recent appointment of liberal Alexander Khloponin as the president’s representative in the region.

“However progress has been relative,” Petrov added. “This attack shows that weapons remain long after a war is over and that the insurgency is still strong. In fact, the Caucasus has been unstable since Soviet times.”

Monday’s bombs were designed to sow fear and cause the maximum amount of casualties. Two female suicide bombers detonated explosive belts laced with sharp metal on the busy trains in the Lubyanka and Park Kultury metro stations, both major hubs where business commuters and students change trains on their way into work and school.

Prime minister Vladimir Putin cut short his trip to Siberia to get back to Moscow and take the lead on the emergency response. “The terrorists will be destroyed,” he said.

“Ironically, Putin’s success in bringing order and some measure of stability to the region is fuelling the fire of extremist resistance,” says Lilit Gevorgyan, a political analyst with Global Insight. “It is a backlash to the state which has recently renewed its efforts to bring the region under control.”

Reports in the Russian media state that $1bn slated for economic reconstruction in the region had been mishandled.

The attack is a text book copy of Russia’s last major metro attack in February 2004, when suicide bombers killed 41 people and injured 250 by detonating bombs at 8:31am on a commuter train at the Paveletskaya metro station. The force of the blast caused the car to swell and tore a hole in its roof, eyewitnesses said. Police say Chechen terrorists were responsible although no one has ever been charged with masterminding that attack.

Despite the chaos and confusion, crowds trapped in the station on Monday remained calm and climbed the stairs to the adjacent circle line trains or left by the exits to the street. So many people called loved ones that mobile coverage came to a stop; some mobile phone networks were briefly overloaded by the demand, others may have been blocked as authorities tried to determine whether phones were involved in the attack.

‘I was in shock. I was deafened by the blast, but at first I didn’t think it was a terrorist attack. Then I saw the smoke and realized it had been an explosion. My only thought was to get away.’
Alexandra Antonova, eyewitness

Initial reports suggested that emergency services were quick on the scene and the station staff remained at their posts to usher the crowds to safety. But the heavy Moscow traffic held up rescue efforts until helicopters arrived to ferry the seriously injured to hospital.

Russia has had altogether too much experience with this sort of tragedy. In addition to the Paveletskaya metro bombing there have been at least five other bomb attacks in public places since the start of the first Chechen war in the mid Nineties.

Perhaps the best remembered terrorist attack is the Beslan school siege that began on September 1, 2004. Three hundred and thirty one people, including more than 200 children, were killed.

While the number of militant groups in the Caucasus has fallen, those that remain have grown more extreme.

“The separatist movement was facing an uphill struggle that was becoming increasingly hopeless,” says Gevorgyan of Global Insight. “The increasing prosperity in the region split the groups so the remaining fighters have embraced progressively more fundamentalist ideas.”

Initially the rebels wanted to secede from the Russian federation, but many have been co-opted into the new administration, said Gevorgyan, adding that the leaders of the remaining groups have a new goal and are calling for the establishment of an Islamic caliphate in the north Caucasus and Caspian region.

Grinding poverty in the region has fed the movement; while the rest of the country has seen incomes rise tenfold in the last decade, unemployment in Chechnya is a staggering 80pc. And resentment over the brutal handling of the locals by Russian forces during the two wars lingers, creating a ready supply of rebels and suicide bombers.

“If [the Kremlin] resorts to a strong-hand response,” says Petrov, “we’ll again see the pointless suppression of certain religious elements and a vicious cycle of attacks and counterattacks. The most important thing is to deal with the situation in the North Caucasus. Young people – in some cases, from wealthy and influential families – are still drawn into the insurgency movement, and this indicates the problems are deep-rooted and complex.”

Both stations where Monday’s bombings occurred also have a special significance. Lubyanka square is home to the headquarters of the Russia security forces (FSB), which are housed in the former KGB building there. And Park Kultury, just across the river from Gorky Park, is home to several large Russian news agencies, including the state-owned giant Ria Novosti.

Carnage in the city: a woman cries at the site of a terrorist bomb attack at the Lubyanka metro station in the heart of Moscow. Two women suicide bombers blew themselves up on packed metro trains during the height of Moscow’s morning rush hour at stations close to the ex-KGB headquarters and Gorky Park. Emergency rescue crews had to recover bodies and treat dozens of injured survivors, many of them in a critical condition.