A day in the life of a heart surgeon 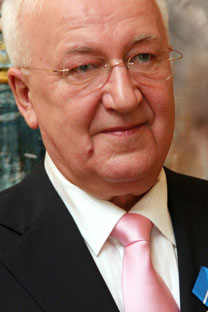 Dr. Leo Bokeria performs four to five operations a day. He has to his credit some two thousand open-heart surgeries. He is also one of the world’s leading experts on the surgical treatment of arrhythmia. RIR invites readers to witness a day of the Russian surgeon, who recently celebrated his 70th birthday.

The Bakulev Cardiovascular Center headed by Bokeria is the largest center of its kind in the world. It performs more operations on children with congenital heart disease than anywhere else on the planet: 3,700 a year as compared with 1,000 at the largest US clinic, in Boston.

Picture this... The director’s office. By the door: the Hippocratic Oath. Massive furniture and a lot of souvenirs everywhere.

On the floor, a huge stuffed lion that is practically life-size. The association is clear: the name of the office’s occupant is Leo.

Bokeria has already changed into scrubs for the operating room — he is wearing a surgeon’s pale green smock.

“I have an operation in 15 minutes. Let’s talk until then.”

“We would like to begin with the subject of how time…”

“My personal time is determined primarily by sleep. I sleep roughly six hours a night. No matter where I am, I try to go to bed at the same time: at midnight or a little after. I get up at about 6:30. I have a simple schedule: I arrive at the center, talk to two or three people in the space of 15 minutes and leave for the operating room. After the operations, I usually have many meetings with colleagues and guests, telephone conversations and mail.”

Bokeria is famous for allowing journalists into the holy of holies, the operating theater. So we set off for the operating block. We don smock, hat, mask, etc. Only our hands and eyes remain uncovered.

The operating theater is cold and brightly lit. A team is gathered round the operating table: Bokeria, a nurse and two young assistant surgeons.

Bokeria is almost unrecognisable: his face is covered by a mask and thick glasses with additional lenses. A heart operation is a delicate business, on top of which many of the patients here are children.

The tiny patient is almost invisible. From under the sheet, one can see only the crown of its almost bald head: the child is four months old.

The baby’s heart has been stopped for an hour now. An artificial circulation machine has been working in its place. The baby’s blood is pumped through the tubes into a transparent container that looks like a gallon jug. It impregnates the blood with oxygen and returns it to the body.

Suddenly the command: “Warm it!” It sounds like the cry “Land!” after many months at sea. During the operation, the body is cooled. We watched, somewhat horrified, as the nurse periodically sprinkled chipped ice around the baby’s body.

Now that the operation is over, the body can be returned to its normal temperature. The green line on the monitor jumps up once. Then again and again. The baby’s heart is working on its own.

We walk out of the operating room into the hall where Bokeria explains what the last two and a half hours involved.

“It was a complicated operation. A normal heart should have a pulmonary artery and an aorta coming out of it. In this case, the heart had only the aorta coming out of it and the pulmonary artery coming out of the aorta. The blood impregnated with oxygen from the lungs could not get to the organs. Moreover, the valve on the aorta was not working properly. No prosthesis exists; they don’t make little valves for infants. The valve has to be reconstructed. I did that and it all seems to have worked.”

“Do you operate on many children?”

Back in the operating room. A different one. Again the silence, the stopped heart, the tubes, the clock on the wall and lots of equipment. And again a small heart. Apparently weak. On top of the heart defect, this baby has Down Syndrome. The two diseases often go together. Bokeria makes a tiny incision with his surgeon’s scissors… Finally we hear: “Warm it!” The body begins to return to life.

“Will the two children you operated on today be all right?”

“They should be. These children will need serious care. But the operations were successful.”

“Is it true that many patients do not survive surgical intervention?"

“The probability of a lethal outcome on the operating table is small. Statistically, for the most complicated cases, 5-7 pc cannot be saved. In countries where heart surgery is popular, people live to at least 80,” says Bokeria.

At a small anteroom outside the OR, Bokeria washes his hands. First with one special solution, then another. Then dries his hands. A nurse holds out his rubber gloves. Now, he’s ready to go to the operating table.

This time, the heart is large and strong. The woman is 40.

We can see Bokeria cutting out a small piece of tissue and handing it to the nurse with tweezers. In exchange, she gives him what looks like a small metal castor.

“Do you want to see? This is what an artificial valve looks like. And this one was made in Russia. Homemade, so to speak,” Bokeria allows himself to smile, then returns to his work with concentration.

Using a syringe, they fill the heart with air. It swells till it looks like a small sack. You can see the blood vessels. You can also see the accretions of fatty tissue — white stripes.

Again: “Warm it!” But something’s not right. The heart doesn’t want to start. The machine records its beats with sound signals. It squeaks, then falls silent. The doctors are puzzled; they keep looking at the monitors. Then, everything returns to normal.

“You have many titles, many positions, good relations with the powers that be. Does anything get in the way of your work?”

“There are many questions. For example, with heart transplants. The public has the impression that people will be killed in order to do a heart transplant. They suspect that doctors will take the heart of a living person and give it to someone else. In fact, this procedure has been devised down to the smallest refinements. Eight hours before a heart is taken from a donor, a test is conducted with medical examiners and other specialists present — a number of people who see that the brain is dead. Eight hours later, the test is repeated. This is an international practice. Thousands of hearts have been transplanted to date.”

Most recently, the Bakulev Center has been developing endovascular operations. Older people with weak organisms are often considered unfit for open-heart surgery. Instead, a small incision is made in the femoral artery, into which a catheter is introduced with a folded artificial valve. The instrument travels along blood vessels to its goal, while the doctors follow the process on a monitor where the heart is seen in 3D. The operation leaves only a tiny scar of three millimeters. An operation like that is on the schedule for tomorrow.

But for now, in the OR, the patient’s heart does not want to start beating. The machine monitoring the patient’s condition is making a continuous, high-pitched squeaking sound.

Bokeria picks up what looks like two large metal spoons with wooden handles. The male nurse tightens a knob on one of the machines. Bokeria drops the spoons right into the thorax. And gives the command: “Discharge!”

The body twitches. The continuous squeak from the monitor becomes intermittent. With the first jolt from the current, the heart started to beat. The operation is over.

Again, we’re in Bokeria’s office. He looks hale and is ready to answer any questions.

“We’d like to return to our question about time. In your view, do you use your time right?”

“Of course not! I’m an academician, the director of a medical center, a laureate of many prizes, I should just go to all sort of coasts and stare at the beautiful women. But, I go on and on! Of course, it’s not right. But that’s how my life has turned out.”

He is the Director of the Bakulev Research Center for Cardiovascular Surgery, a chief heart surgeon of the Russia’s Health and Social Development Ministry, the president of the Health of the Nation League and member of the Public Chamber where he chairs the Healthy Life commission. Born in Ochamchira, Abkhazia, Leo Bokeria was educated at Moscow's First Medical Institute and holds a Doctor's degree in Medicine. Since 1968, he has worked at the Cardiovascular Surgery Institute.

Bokeria has to his credit at least ten operations that he was the first to perform in Russia. But the details are hidden behind a string of terms that only specialists understand: “trans-myocardial revascularization”, “implantation of cardio-defibrillators”, “dynamic cardio-myoplasty”, etc.

It was Bokeria who invented the method of hyperbaric oxygenation, which allows surgeons to operate on virtually inoperable children by placing them in an altitude chamber.