A town for innovators 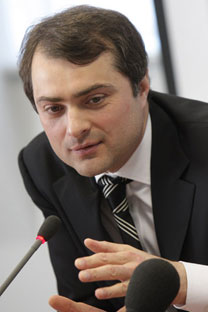 Russia should move on to the next stage of technological development, says Vladislav Surkov, the first deputy head of President Administration. In his interview, Surkov elaborates on Russia’s modernisation plans and its intellectual potential, as well as shares details of the construction of the innovation center near Moscow.

The launch of a new big project, called Silicon Valley, has been announced. Why is it being done now?

First of all, the project is not called Silicon Valley. This is a kind of symbol that makes things more clear. The Russian project, of which the Russian president spoke and which is now being implemented by his decision, covers five priority areas, which the president indicated as “Priority directions of modernisation of our economy”. Naturally, they include energy and IT, because today these branches are in the vanguard of world economic development. It is also biomedical technologies which we urgently need for social security reasons because Russia should take care of its citizens and their health. This is also nuclear technologies in which Russia has traditionally been strong, and we should preserve and increase our advantage in it. Telecommunications is another important area. We do not have to explain that this industry is a strategic vector of development for the entire world civilisation, the entire modern technological world. So, these are the five big macro industries which are going to develop under the new project.

Our economy should, above all, be based on our intellectual advantages, our knowledge and ability to invent new technologies. This is a matter of political influence, because no weapons in the contemporary world, no powerful army can replace essential products, in the broad sense of this word, which people use in everyday life.

This is, above all, a social task, because I am absolutely sure that a raw-material economy is unable to elementarily feed this country in a long-term perspective. It has exhausted its abilities to improve the well-being of our citizens. We are a very big country with a large population. We have stretched wide; we have a very big and costly infrastructure. Besides, we should also bear in mind that we are a northern country. Our expenses are too high. We should learn to earn money with our brains. In my view, what we have in our heads is far more expensive and profitable than what we have in our soil.

We have excellent scientific centers, which were created in Soviet days in Siberia, near Moscow and in many other regions. But our task is to enter a new stage of civilisation. Our task is not to carry out a European-style makeover in our Soviet home, but to build a new Russia with a new economy, and in order to do that, it is sometimes very useful to find yourself in an open field. And sometimes, you have to start things from scratch so that what impedes us, stops being a hindrance. We can try to create on a certain stretch of land and in a certain area a certain space to where we will take the best of what we have in our life and will leave behind the worst, which is a hindrance in our everyday life. The best conditions will be created for these best people. They will know that they are in the best place in Russia and in one of the best places in the world.

And who are they? They are engineers, inventors and scientists. I, in fact, think that these are number one professions for Russia. We have enough lawyers and we have many economists. We are rich in representatives of many professions. But it is the engineer who will bring his country forward in the first place.

We also want to create a unique and creative atmosphere. This is really a new town and it is vitally important that it becomes international in the very beginning. It should be of a level and quality that will attract the best experts from all over the world. I think that if two, three or four Nobel Prize winners do not live and work in this town in the long run, it will mean that we have not solved our task. The headquarters of the world leading and most prestigious and modern companies should sit in this town. It seems to me that even architecture matters. A young man, a young scientist should look around and say: yes, this is the best place of all.

Five priority directions of modernisation of the Russian economy

This is, indeed, a fairly big project. But I wouldn’t call it extremely large scale. We have a big country that can develop only with the help of big projects. On the contrary, I think that it’s not so large scale. In recent times, we’ve developed an awkwardness of thought. We are afraid of any new ventures. We call each big project adventurous and say that it will never be a success.

This abjection of thought is the main problem for this country, from my point of view. I think that we should have several such projects.

Look at other countries. They are not afraid of being ambitious. India is building several universities at a time. Enormous corporate towns with a population of 500,000 people are emerging in China. We are talking about 10,000 or 20,000, but these cities in China have 500,000 people. I am sure that this is absolutely realistic and the scale of this project is proportionate to the size of this country.

How will this project be carried out in organisational terms? Can we talk about any duration guidelines if we speak about the creation of this town?

First of all, a working group has been set up on order from the president to coordinate all this work. The president gave me the honour to head this working group and its work. A special body will be set up to supervise this work. The line-up of its founders will expand as negotiations will develop, including with foreign partners whose presence in this project is absolutely essential because it’s their experience that will help us to avoid mistakes.

On the other hand, we need partners who will provide a direct link with the global economy, with top-class world scientific and technological communities, and with world companies advanced in all high-tech sectors.

The construction itself may take from three to seven years, dependending on how things will go. Of course, it’s very difficult to say in advance when a miracle is going to happen, a sacred spark that could flare up in this kind of community that will draw together entrepreneurs and scientists and that will simultaneously host a university center, laboratories and research departments of major basic material companies and non-basic material companies and also high-tech companies; where venture capital, which at the moment is practically non-existent in Russia, will be present, and where small enterprises are going to emerge and operate in comfortable conditions.

In my view, this environment can be formed in 10 or 15 years. I think that after that time, a chain reaction that will be difficult to stop may start. It will last for quite a long period of time, and will result in a wave of Russian inventions. I personally believe in this. I think that we are going to succeed.

This interview was conducted by a Russian TV channel.