Voices from the Blasts 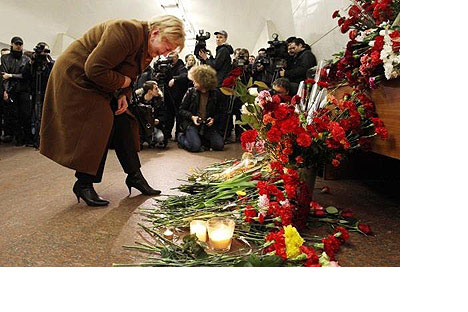 Muscovites bring flowers at scene of the deadly blast

The bombs that went off in two Moscow metro stations, leaving at least 38 people dead and wounding many more, affected millions. Tens of thousands of commuters began their week traumatized and bewildered. Most Russians were on their way to work. Some bore witness to the tragedy. Others worried nearby, waiting for news. These are their voices.

Igor Denisov, radio correspondent for Voice of Russia World Service, was on the train that was bombed at Park Kultury:

I was at the back of the train. I got on at the Sportivnaya stop at about 8:30 a.m. Over the loudspeaker they were already announcing that southbound trains between Komsomolskaya and Park Kultury were out of service. But trains were still running north to the center, although very slowly. It took us about ten minutes to get to Park Kultury, the train kept stopping. Over the radio we were told that this was for ‘technical reasons’, in other words everything was normal and nothing foreshadowed tragedy.

“The morning began as it always does. Nothing hinted at the bad news to come.”

I heard a boom just as we arrived at Park Kultury. The doors opened, there was smoke, but not a lot, we could still see. People left the station, the situation was very tense, but there was no great panic. Everyone supported each other. I admired the people who were next to me.

The escalators had been turned off. There were a lot of people trying to get out and there could have been additional injuries. At the transfer to the Circle Line someone said over the loudspeaker: “Make way for the wounded.” Although the crowd was body to body, people made way. A young man covered in blood walked past me unaided. They were already closing the station, the turnstiles allowed you to exit only. Outside I heard the sirens of ambulances, but I didn’t see any and made my way to work on foot.

A friend of my son, a student at Moscow University, was on his way to classes. He was in the Park Kultury station when the bomb went off. But he was traveling in the opposite direction (southbound to the University Metro station). “On the platform they collected a pile of bodies,” he said. “All around there were human organs and blood.”

Reactions in the blogosphere:

The morning began the way it always does, nothing hinted at the bad news to come. I calmly had breakfast and went off to the tax office. I was standing calmly in line and reading Twitter when I suddenly saw the report about an explosion at the Lubyanka station and 25 dead. By the time I got to work there was a second report about a second explosion on the same Metro line.

Life these days is frightening. If terrorists did this then I wonder what they want and what they’re trying to prove. Do they want to spread fear? I don’t understand people like that.

What monsters. I’m no fan of Mr. Putin but now I agree with his thesis that the terrorists are also the ones who organize and sponsor these acts, they need to be “wiped out in the outhouse.”

Whatever your goals, however ideal they might seem, you would have to be an absolute imbecile to consider people who don’t share your convictions (and don’t even know anything about them) unworthy to live.

I’ve got to call my relatives…

“Although the crowd was body to body, people made way. A young man covered in blood walked past me, unaided.”

No one is immune. Today you’re smiling and making plans — you have a long life ahead of you, you’re going to Spain this summer, next year you’ll give Misha a child, Saturday you’ll go visit Granny… But all this can be taken away from you by completely incomprehensible people wearing explosive belts. A human life is cut short easily, it is so fragile… Today someone lost a dear friend, someone else lost their first love, their mother, their sister…

Not long ago someone bombed the Nevsky Express, now the Metro…

The blogosphere has reacted strangely to the explosions in the Moscow Metro. The cases of blatant gloating I won’t even consider, I’ll leave them to the psychiatrists. What’s interesting is this: There’s already been a wave of “analysis” in which the tragedy has been blamed with obtuse assurance on everyone from terrorists in the northern Caucasus to the FSB. Of course, in Russia you can never rule anything out, but I think that now is not really the moment to show off your theoretical calculations and remarkable intellect and talk, talk, talk, when the humane thing to do would be to be silent…

I was a witness to the explosion at the Park Kultury Metro station in Moscow.

I was on my way to the University stop. I was really late, so I decided not to take the Circle Line, and instead go by way of Petrovsko-Razumovskaya, then Borovitskaya, then Park Kultury. When I was transferring from Borovitskaya to the Red Line I heard the announcement, the announcer’s voice was anxious:

“Dear Passengers! Due to technical problems, trains on [the Red Line] are running less frequently. Please use ground transportation or other Metro stations.”

Damn them, I thought, they’ve gone and messed everything up again and every year the fares go up and up.

They must have been looking for explosives. On the ride to Park Kultury people were talking about the explosion at Lubyanka. I thought it was a false alarm. I got off at Park Kultury and noticed policemen next to me. A woman was asking them: “What happened.” “Oh, some breakdown, technical problems,” they said. Then I heard an explosion. It was on the train opposite mine, going toward Kropotkinskaya.

Thanks to the police force for their rapid, precise and coolheaded response in evacuating people.