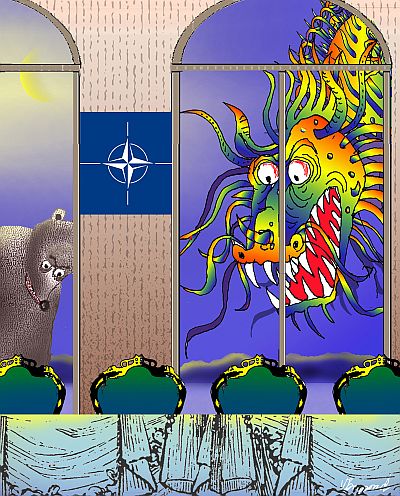 The idea of Russian membership in Nato has, until recently, belonged in the realm of fantasy. However, in March 2010, a group of German political and military leaders, including former defence minister Volker Ruhe and General Klaus Naumann, former chief of Nato’s military planning committee, called on Nato to invite Moscow to join the organisation.

The thinking was simple: without Russia, there can be no adequate security system in Europe, and Nato’s capability will not be sufficient to maintain stability in Eurasia. Developments in the past two years have made it clear that the future of Nato lies in increasing its membership. Second, most US allies are not prepared to engage in combat all over the world to further America’s strategic interests. Third, the US has revised its priorities in favour of the regions (the Middle and Far East) where the European states have limited interests. “The most successful military-political alliance in history”, as Nato calls itself, needs new goals.

A global Nato has not materialised, and many commentators believe the Alliance may have to return to its initial mission of safeguarding European security.

American political analyst Charles Kupchan, commenting on the article by Volker Ruhe and his friends, notes that a European security structure that excludes Russia makes little sense strategically. Without Russia, it can only make sense if the former line of confrontation is restored.

This is, essentially, also the message of an article by military strategy expert Andrew Bacevich in the latest issue of Foreign Policy. In his opinion, the US should no longer count on its European allies, who have lost their appetite for doing battle. However, Washington will probably preserve its minimum presence in Europe in order to keep the alliance together as a safeguard for European stability. But that would still not provide a solution for the future of Nato and European stability, and that means that the Russian question cannot be sidestepped.

The idea of admitting Russia is clever. On the one hand, Nato will not depart from the enlargement doctrine and, most importantly, will preserve the function of the main, if not the only, security structure in Europe. On the other, it provides an answer to Moscow’s complaints that it does not take its interests into account and harms it by its actions.
Certainly, the opinion of Volker Ruhe is not universally shared: the majority in America and in many European countries cannot imagine a formal alliance with Russia. But let us imagine that the pro-Russian view prevails and Moscow is offered the opportunity to seriously discuss joining Nato.

The first knee-jerk reaction would be that this is simply impossible. Russia sees itself as an independent power centre in a multi-polar world and therefore should not bind itself by commitments to another power centre. While all the Nato member countries are formally equal, the US is the undisputed hegemonic force. Washington has no tradition of equal alliances. One can imagine America relinquishing its dominance only if it is dramatically enfeebled. But in that case one could imagine a new version of “Fortress America”, withdrawing from Europe, rather than the US becoming a rank-and-file ally. The same is true of Russia.

All this is valid today, but one should never say never. China is the variable that can change the whole equation. Neither the USA nor Russia knows how to deal with that country which, after the end of the Cold War, has managed to benefit from global changes. If China’s economic and political clout continue to grow at the present rate, both Moscow and Washington will have reason to consider various options of balancing its influence.

That would throw a totally different complexion on the whole problem of Russia’s Nato membership. But the situation will not cease to be controversial. One would have thought that an alliance between Moscow and Washington would make both more confident in the face of Chinese might. But Russia and America’s fears are different. For America, China is a potential global problem and a challenge to its world leadership; for Russia, it is the danger of being dependent on its economically much more powerful neighbour. Accordingly, Washington would gain more if it induces China to pursue a policy of regional expansion, in other words in the direction of Russia. Moscow, on the contrary, would like to see China seeking global dominance rather than consolidating its grip on adjacent territories.

To depart from political correctness, in the event of the further rise of the PRC, Russia would be interested in setting Beijing and Washington against each other, while the US would seek to do the same with Beijing and Moscow.

Europe would then find itself in an odd situation: embroiled in the settling of accounts between big geopolitical players thereby risking its own tranquillity.

A stable security system arises when there is a balance of forces and interests between key players. Nothing remotely like it has been observed in Europe or the world since the end of the Cold War. Each of the potential members of the new system will be afraid of being short-changed and misjudging the likely development of events. For this reason, serious discussion of Russia’s Nato membership is yet to take place.