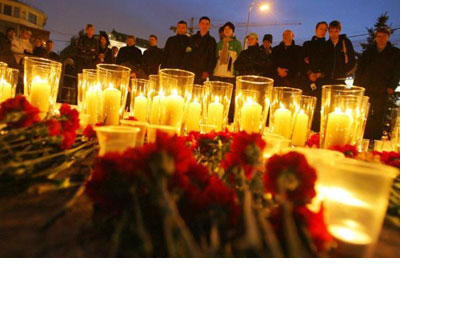 Sadly, this is nothing so heroic-sounding as an act of defiance against terrorism. They often call it that on TV at the moment, people getting back on the train, but I suspect that for most of us there's really no other option except staying at home. We don't have a car; Moscow traffic is terrible and, since Monday, it's been even worse. With 33,000 people dying in traffic accidents every year on Russia's roads, you are still safer on the metro, with its seven plus million passengers a day, from the point of view of brutal statistics.

Psychologically, it's still uncomfortable. Lots of people glance at my stawberry blonde, fair-skinned children (a rare sight anyway in these demographically challenged times), but we're all glancing at each other at the moment. People often change carriages. The train stops at Lubyanka, scene of Monday's first bomb. The station was built in the thirties, one of the first to open, exactly 75 years ago next month. The first stretch of metro linked the landscaped forests of Sokolniki with Gorky Park on the other side of town. The FSB (former KGB) headquarters, with which the area is synonymous, is overhead.

Lubyanka station has become an unofficial memorial. A circle of people stand in silence round an ever-growing pile of flowers and photographs. Several people are in tears; a few take photographs. Every second someone adds a couple of red carnations to the mountain stacked against the wall and later on the trains we can spot the carnation-carrying pilgrims, heading to this shrine.

Last week, I walked past a new chapel in the suburb of Pechatniki: white with a slender gold dome above layers of pointed gables. An intricately-carved stone plaque announced that this was the site of a 1999 apartment bombing in which nearly 100 people died, victims of a conflict that has errupted sporadically over the intervening decade. The church is surrounded by tower blocks, close to the wide Moscow River, flowing south past islands and ancient monasteries, a beautiful monument to an ongoing tragedy.