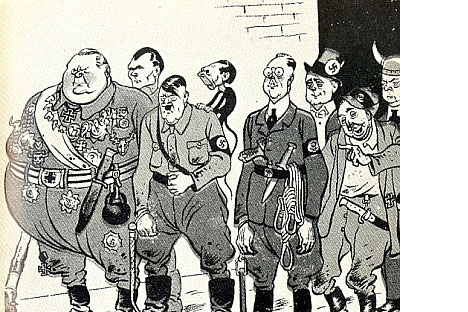 Low became famous in the 1930s for his Evening Standard cartoons of Colonel Blimp, the mustachioed, xenophobic, arrogant stereotype of all things British. Boris Efimov, the satirist Low found so appealing, worked for Soviet media such as Izvestiia and Krokodil.

Low introduced an English-language collection of the Soviet cartoonist’s work, entitled Hitler and His Gang. Published by Alliance Press in London, the book is a revealing window into the propaganda war waged between the Allies and the Axis in World War II. It is also a strange reminder of that strangest of alliances between the world’s democracies and the world’s first socialist state.

Low and Efimov had something in common aside from cartoons: Joseph Goebbels hated them both. The Nazi Propaganda Minister told the British Foreign Minister in 1937 that Low’s cartoons mocking Hitler were damaging Anglo-German relations. Goebbels also threatened to hang Efimov when the Nazis took Moscow because of his satirical cartoons, the very same ones that appeared in Hitler and His Gang.

Before the two cartoonists found a source of common hatred, each had mocked the other’s country. Efimov achieved fame by the 1930s for his “satirical weapons” aimed at the fledgling Soviet state’s enemies. Among those who felt his artistic wrath were bourgeois capitalists, Italian fascists, and anti-Soviet British politicians. Sir Austen Chamberlain, the British Foreign Minister, formally complained to Soviet authorities about a 1927 Efimov cartoon that ridiculed his policies. Low also drew cartoons that illustrated British foreign policy aims. His 1939 Rendezvous visualized British attitudes about the Nazi-Soviet Pact. Hitler greets Stalin with the words, “The Scum of the Earth, I Believe?” Stalin tips his cap at his fellow dictator and responds, “The Bloody Assassin of the Workers, I Presume?” Low repeatedly returned to this theme over the next year and a half.

But then Hitler brought Low, Efimov, and their respective nations together. Efimov had ridiculed Nazis as early as 1924 and the threat posed by the Germans became the central focus of his 1930s cartoons. When the 1939 Pact was announced, Efimov stopped producing his satirical images (and for a while he stopped work altogether after the arrest and execution of his brother, Mikhail Koltsov). After Hitler invaded Soviet Russia in June 1941, however, Stalin called the cartoonist back to work. His cartoons became visual weapons in the struggle against the Nazis and, as Low noted in the English-language edition, “it is obvious from a study of his cartoons that he thinks, quite rightly, that Hitler is a fool.” Moreover, “His Goebbels is a rat. His Himmler is a neat sneak. His Goering is a fat slob.” Low concluded that Efimov’s cartoons and the satirical thrust behind them were no different than his own. “Seemingly,” he wrote, “the Russian sense of the ridiculous is very like that of the British.” Poking fun at the shared enemy, the British cartoonist hoped, “will have more profound effects upon the mutual understanding of British and Russian peoples than a cart-load of diplomacy.”

The cartoons produced in the accompanying slideshow are all from Hitler and His Gang. You can see what Low saw in them: Boris Efimov’s talent and his ability to mock the enemy. You can also see the visualization of the brief alliance between the UK, the USA, and the USSR. Ironically, Efimov would use the visual parameters mapped out in his wartime cartoons to poke fun after 1945 at the new enemy. Churchill became a shadow of Hitler in Efimov’s 1947 “A Performance at Fulton” and Truman could look at the NATO treaty and see a reflection of Hitler in his 1947 “In History’s Mirror.”

Both Low and Efimov drew history. They also shaped it and the way it was remembered. Greg Neale of BBC History Magazine said of Low’s work: “Far from being ephemeral items, the work of the great cartoonists—and the newspapers they first appeared in—helped make history, and have themselves become historically important. Few if any cartoonists have captured the mood of their day or interpreted its political events as effectively as David Low, whose work remains so instantly recognizable and whose influence has been so enduring.” Just before Efimov’s 2008 death at the age of 108, his friend Genrikh Borovik wrote similar words: “all [of his work] consists of lessons. Not edifications that could be rightfully taught by this wonderful man, a man who lived an astonishing life full of victories and defeats, hopes and tragedies, faith and disappointment. No, they do not consist of edifications; they consist of history lessons.” Sixty-five years after the cartoons you see here appeared, and sixty-five years after the alliance behind them broke apart, we can still see these history lessons and glimpse the history of the twentieth century through the eyes of one of its greatest cartoonists.