Finding the sources of terror 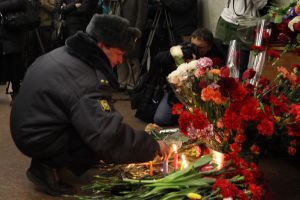 The terrorist threat to Russia reasserted itself in the last days of March. Another 50 names were added to the country’s list of victims of terrorism. In the wake of these deaths, it is difficult to talk about terrorism without anger and bias. However, in order to understand the challenge terrorism poses to Russian society – to society in particular because the principle targets of these terrorist acts are not officials, but ordinary citizens – cold and sober analysis is needed. Only a strict, analytical approach can help us develop the right anti-terrorist strategy.

The word “terrorism” derives from the Latin word for fear – terror. In his famous 19th century dictionary of the Russian language, Vladimir Dal defines terrorism as “inspiring fear with executions, murders and all manner of savagery.” Meanwhile, many Russian and foreign psychologists and psychiatric specialists contend that the quickest way to fear is ignorance – people are most afraid of what they do not know and do not understand.

On March 31, several extremist Web sites published a statement by Doku Umarov, leader of the “Caucasus Emirate,” taking responsibility for the two explosions in the Moscow Metro two days before. “The war will come to your streets,” Umarov promised all Russians. “You will feel it in your own lives and on your own hides.” Announcements like this are not empty bravado. They are part of the standard war of words whose object is to convince your opponent of your supremacy. But are the Russian authorities, media and non-government structures ready to understand that they are being challenged? How do Russian officials, journalists and experts refer to Umarov and his supporters? They label them either as bandits, as Chechen rebels or separatists. Yet Umarov and his people have nothing to do with either the separatist idea or organized crime. Their fight is a fight against government and society, and it requires serious study.

Russia’s formal recognition of Abkhazia and South Ossetia as independent republics in 2008 did more than change the political landscape of the southern Caucasus. It raised a number of sensitive questions. Will it become a precedent for separatist or nationalist movements in the former Soviet Union? Could Moscow’s unilateral recognition of Abkhazian and South Ossetian sovereignty trigger a “domino effect” inside Russia proper, particularly in the northern Caucasus? These are legitimate questions, but the current instability in Ingushetia, Chechnya and Dagestan cannot be identified as a manifestation of separatism. Not every explosion, abduction, diversion or anti-government protest is separatism. Islamic radicals also use these tactics and one of their leaders is Doku Umarov. As early as October 2007, he announced the liquidation of the unrecognized “Chechen Republic of Ichkeria” – a virtual state based in Chechen nationalism – and the creation of the “Caucasus Emirate,” a virtual state that professes the values of radical Islam.

Umarov and his supporters mean to do more than just create an Islamic state in the northern Caucasus. Their aims and objectives are far broader: “After the expulsion of the infidels,” Umarov has said, “we must take back all the historical lands of Muslims, and their borders are located outside the Caucasus.” Consequently, Umarov and his supporters see not only Russia as an opponent, but also the United States, Europe and Israel. Umarov sees his “emirate” as an inalienable part of the global jihad. “I am disappointed by the position of Muslims who say that their enemies are only those kafirs [non-Muslims] who have attacked them directly. At the same time they seek support and sympathy from other kafirs, forgetting that all infidels are one nation. Today our brothers are fighting in Afghanistan, Iraq, Somalia and Palestine. All those who have attacked Muslims, wherever they are, are our enemies,” Umarov said.

What is the cause of this political and ideological shift in the northern Caucasus? From my point of view, ethnic nationalism as a discourse in the northern Caucasus has suffered an historical defeat. It may be a temporary defeat – especially given the poor quality of the policies of the federal center – but that is the reality today. Radical protest movements against Russia’s central or regional authorities do not use the language of nationalism or separatism, but that of Islamic extremism.

The popularity of ethnic nationalism reached its peak in the early 1990s, then began to decline. The demand for ethnic nationalism at the fall of the Soviet state was prompted by objective circumstances. First of all, the collapse of any empire exacerbates the search for “roots,” for a new identity. Secondly, republics in Russia’s northern Caucasus were for 70 years part of the Soviet state which, on the one hand, conducted a policy of state atheism, and, on the other, promoted the legal institutionalization of ethnicity. Religiosity was forbidden, while ethnicity was cultivated. Therefore the “radicals” who appeared in the early 1990s in the northern Caucasus strove to combine religious rhetoric with nationalism.

But then ethnic nationalism and separatism lost their former popularity, partially because, given the ethnic variety in the northern Caucasus, ethno-nationalism (and separatism) has been fraught with conflict. There were many such conflicts in the 1990s: the Ossetian-Ingush and Russian-Chechen conflicts being only two of the most well-known and brutal. Ethno-nationalism also could not solve a number of pressing problems among ethnic elites, including hopes for the territorial rehabilitation of uprooted peoples. The ethnic elites that came to power set about privatizing power and property, forgetting the promises they had given to members of “their people.”

By the mid-1990s, the northern Caucasus had a significant radical-Islamic element. “Pure Islam” as a project for the Caucasus was the result of interference by outside forces (Saudis, Pakistanis) and engendered by the internal environment. This philosophy became quite popular because it appealed to universal values that reached beyond ethnicities and clans. It emphasized egalitarianism and the fight against corruption and social injustice. All of this took shape in the absence of any clear strategy for social, economic and political development in the northern Caucasus coming from the federal center. As a result, the spread of radical Islam began not only in the eastern part of the region – Chechnya, Dagestan and Ingushetia – but also in the western part, where the population was traditionally less religious.

That said, that the people who consider themselves defenders of “pure Islam” are far from homogeneous. They include those who have gone outside the law as well as those who see “pure Islam” as a fad. They also include people who have lost their way and are simply disoriented. In any case, to consider them all “enemies of Russia” would be a grave political mistake. Consequently Russia’s anti-terrorist strategy should not be confined to political measures alone. Harsh measures should be combined with a search for mechanisms of “soft power.” The “moderates” should be separated from the “radicals.” Negotiations should be conducted while surgically removing the ringleaders of these terrorist groups. And these surgical strikes should not be ends in themselves. They should be accompanied by open trials.

Today in the struggle against terrorism, we do not need any more flashy rhetoric. What is needed now is a clear understanding of the dynamic, the causes of terrorism, as well as of the strategy and tactics of political violence, its varieties and driving forces. We also need to distinguish between acts of terrorism and banal gangland killings. We need to fight first the ideas, and then fight the implementers of those ideas.

Sergei Markedonov is a political scientist and expert on the Caucasus