Immigrants make up 10% of work force 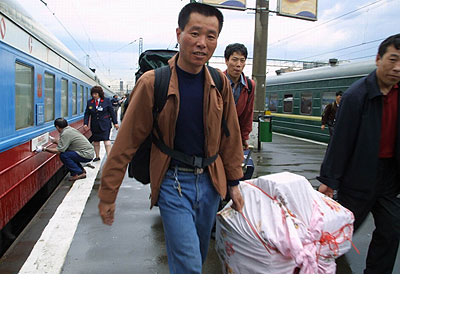 Foreign workers make up as much as 10 percent of the country's work force, a report published by the United Nations said Wednesday.

There were 2.4 million officially registered migrants in 2008, although the real figure is likely three times higher, according to the report on Russia's demographic development, commissioned by the United Nations Population Fund.

"Taking into account the shadow component of labor migration, the average proportion of foreigners currently employed in Russia may be around 10 percent," the report said. "Illegal migrants are basically employed in jobs the local population doesn't want."

The country's official work force stood at about 74.5 million people, or 52 percent of the population, as of February 2010, according to the State Statistics Service.

The report praised authorities for better facilitating the registration procedure for migrants and improving border control but said the country still lacked a systemic approach to immigration.

"Russia is still in search of an efficient migration policy that can tackle the future demographic situation," the report said. "Meanwhile, both the work force shortage and the risks posed by illegal migration are underestimated."

A law regulating the status of foreign workers came into force in 2007, which requires candidates to present an identity document and a migration card and to pay a fee to get a card.

The law allowed migrants to obtain a work permit and change employers freely, rather than depend on a specific employer to get one as before. But in June, Prime Minister Vladimir Putin vowed to reverse the measure and link each migrant to a specific employer so as to have more leverage on the number of foreign workers.

The initial steps were a good way for the country to generate more of a benefit from immigration, but the recession has made the government rethink its strategy, said Nikita Mkrtchyan, a senior research fellow at the Higher School of Economics.

"Things have changed since the government realized it didn't need so many foreign workers in the recession-hit sectors like the construction," he said. "The official quotas for migrants for 2010 were reduced, which pushed lots of foreigners out of the legal framework."

The Federal Migration Service announced last November that quotas for guest workers this year would be reduced to 1.94 million people from 3.97 million in 2009.

Although the exact number of economically motivated immigrants is hard to estimate, the figure revealed by the UN looks a bit exaggerated, Mkrtchyan said.

"If you take [the UN's] percentage, you will see that there should be 7 million to 8 million foreign workers in Russia, which isn't accurate," he said. "The recession made up to 20 percent to 30 percent of foreigners return home, so I would assume the overall figure is now significantly less."

This article was first published in The Moscow Times