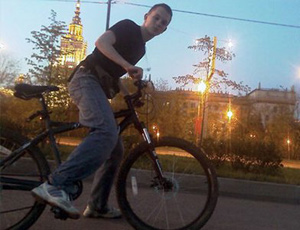 In the Academy-Award winning film, Christopher Walken plays a PWO forced into a chilling game of Russian Roulette.

A prodigy web-designer, Ternovskiy, has become too big for his Russian roots and is now being wooed in the United States. He moved because he was tired of endless phone calls, he said. Everybody was trying to get through: journalists, friends, and potential investors. His getaway to the United States could become more of the same, however. He already has several invitations from several big investors and technology companies.

Andrey told chaskor.ru what he’s doing in the United States, the kind of offers he might entertain, and why he doesn’t want to return to Moscow.

Who are you meeting in the U.S.?

To be honest, I did my best to avoid any meetings here, so that I had enough time to work on my Web site and get down to developing the service. You might say that I simply ran away from endless phone calls, interviews and people chasing me for a chat.

I’ve met with a businessman named Fred Wilson, a reporter from The New York Times, and the programmer from West Virginia who is helping me with the Chatroulette project.

Western media reported that you have already met with Google and Skype.

This is not true. I’m only planning to meet with people from these and other companies. But I don’t know what we are going to discuss.

"Strange as it may sound, I don’t draw on my family for funds. At the beginning of the project, they loaned me one thousand dollars and I have paid it back. The sum was enough to start things up at the time when the Web site had only a few visitors."

Do all those investors and IT giants come forward with specific proposals or just want to discuss things?

We usually have general conversations. They ask how I want to develop the service and what my plans are. So far, the only serious offer has come from a Russian holding company, Digital Sky Technologies. They offered to buy 10% of my project and asked my price for the share.

Some companies approached me with absurd proposals to buy the project for a million dollars, but I haven’t seriously considered them. I’m not rushing to make any serious decisions right now. I just arrived in the US, so all the important meetings are still ahead.

I have only been to New York, which is mainly populated with investors and bankers and has few IT companies to talk to, and the latter are of primary interest to me. Currently I am staying in San Francisco, just a short distance from the legendary Silicon Valley.

Do you see your future in the Silicon Valley?

This is only a dream at this point. I’d love to have my own office there and become an IT businessman with a global reputation.

How much did your family invest in the project?

Strange as it may sound, I don’t draw on my family for funds. At the beginning of the project, they loaned me one thousand dollars and I have paid it back. The sum was enough to start things up at the time when the Web site had only a few visitors. Then the service began paying for itself. However, I arrived in the United States with nearly empty pockets. Some expenses were covered by my friends and some by the people who invited me to come. I stayed for three days at my friend’s place – I had met him only online before – in a dump of an apartment. But I could use the Internet there, and this is basically all I ask for: a laptop and access to the Internet.

"All I ask for is a laptop and access to the Internet."

Have you thought of joining a big IT corporation like Google or Microsoft? Or is your entrepreneurial spirit too strong for that?

I’d say that I’m not actually much of an entrepreneur. But my head is full of ideas. As for working for a well-known company, I really don’t know. On the one hand, I would like to stay in the United States for a while, and I need money for that. I want to work and keep developing my project at the same time. But on the other hand, I don’t want to make any rushed decisions at this moment as Chatroulette may keep me afloat. I have no clear plan for the future.

All of this feels just like a crazy breakaway journey.