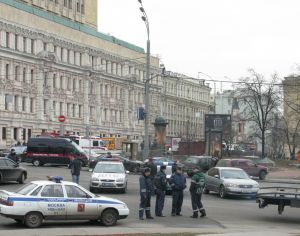 This week's deadly terrorist attacks in Moscow and Dagestan have hit a raw nerve, striking just as President Dmitry Medvedev's ambitious police reforms are getting underway. And the government's bid to toughen anti-terrorism laws has some wondering whether the fight against corruption may be pushed to the back burner.

"Maybe the anti-corruption reforms are too slow and ineffective, but at least something is being done, some minimal order is being established. And someone didn't like this," said Mikhail Pashkin, chairman of the Moscow Police Union, adding that the Interior Ministry and the Federal Security Service could have prevented the attacks if it wasn't for corruption.

Now, he fears those key reforms may be delayed.

"Today they were supposed to publish a new project for police reform on the Interior Ministry's web site - but it's not there," Pashkin said. "Apparently something kept it from happening again."

As happened after terrorist attacks in 2004, top government officials have moved to boost security, even as Medvedev warned that the measures should not infringe on people's freedoms.

Prime Minister Vladimir Putin, who 10 years ago promised to waste terrorists in outhouses, said after this week's metro bombings that "it is a point of honour for the security services to drag them from the bottom of the sewers into the light of God."

Medvedev told top judicial officials to review laws against terrorism, while leading arliamentarians - including Communist Party leader Gennady Zyuganov - called for the introduction of the death penalty for terrorist attacks. The president also signed a decree beefing up transport security.

Putin told officials on Wednesday to improve "the legal basis that provides security for our citizens" and to come up with ways to make public transport safer.

And a top official at United Russia called for more legal and financial leverage for the security services. "Probably there will need to be more powers given to security services that are responsible for fighting terrorism," Valery Ryazansky, deputy chairman of United Russia's Duma faction, told The Moscow News. "It's clear that not everything is sufficient in this area."

Asked what kind of legislation Russians could expect to see, he said that most likely it will involve "increasing responsibility in migration legislation. Those working in organisations responsible for registering citizens will be made more accountable.

Laws countering terrorism will be made more severe. And legislation on law enforcement will be stricter."

But some parliamentarians argue that it is corruption - and not a lack of legislation - that leads to security lapses.

"I don't understand what else should be changed in our legislation, which isn't being implemented as it is," Gennady Gudkov, deputy chairman of the State Duma's security committee and a member of the Just Russia party, told The Moscow News. "First we need to learn how to abide by the laws we have."

Corruption has reached critical levels, Gudkov said. "What is the point of a police regime if you can bypass the police for a bribe? Law-abiding citizens suffer because criminals are able to bribe their way past them."

It was strange that neither the Interior Ministry nor the FSB had asked his committee for new legislation before, Gudkov said. "And now it turns out they have legislative problems. But I think reason number one is that they can't organise their work properly," he said.

But senior United Russia Duma Deputy Sergei Markov, said the attacks should lead to a "stimulation of the fight against corruption. It is clear that one of the reasons behind the ineffectiveness of law enforcement structures is the high level of corruption."

Corruption keeps officers from having the time and the resources to effectively fight terrorists, he said.

"For the Interior Ministry to work better, reforms should be speeded up, not postponed," he said. "Certain details can be put on hold, but the programme itself should be hastened."

He added that it was unlikely that someone was deliberately trying to derail the anti-corruption campaign, and blamed the attacks on corruption itself. "They were organised in the North Caucasus. The clan wars in the area - which feed into the system of corruption" are also part of the problem, Markov said. "The racket with business doesn't allow them to stop the racket by radical Islamists. The overall effectiveness is weaker because of this."