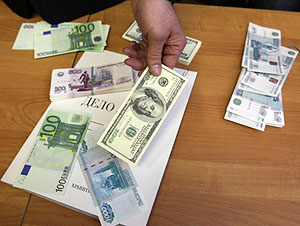 "Corruption-related crime rate continued to rise in 2010, showing a 10% increase in the army and increasing manifold in the interior and border troops," said Russian general military prosecutor Fridinsky, who estimated that the damage caused by graft had increased five-fold year-on-year. Corruption is also on the rise in the army, he said, according to a report on Interfax.

For the first time, the problem is being discussed openly by the political elite. Unfortunately, abuse appears rampant in the lower ranks and the task of reigning in corruption is going to be Herculean.

Russian president Dmitry Medvedev has launched Russia's first concerted attempt to clean out the rot in the country's police force, but these changes face huge challenges. Interior Minister Rashid Nurgaliyev, who has been tasked with drawing up a draft law to reform the police, missed a self-imposed deadline of April 1.

The draft is designed to update the laws governing the police that have remained untouched since the fall of the Soviet Union in 1991. An unnamed official at the Interior Ministry told newswires he did not know the reason for the delay or when the bill would be published.

The police reform has been given extra impetus by the terror bombing attacks last week in Moscow and Nurgaliyev accompanied Medvedev on a surprise, five-hour trip to Dagestan, the scene of a second round of bombs last week.

Medvedev and Prime Minister Vladimir Putin are becoming visibly frustrated by the slow progress of reform. Their orders are often ignored or progress on pushing the change through is going too slowly. Medvedev told regional authorities earlier this month to shape up or "take a hike" in a rare example of the president's frustration with the creaky operation of the government's machinery.

The new police law is supposed to "carry a new spirit" and its "main principle will be to protect the rights and freedoms of our citizens," Nurgaliyev said.