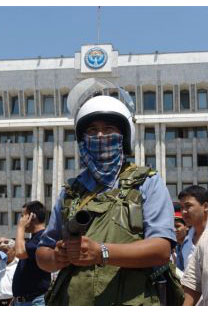 The Kyrgyz opposition formed a government of national confidence led by former foreign minister Roza Otunbayeva and demanded a transfer of power from the official cabinet as the death count in the country's protests rose to 40.

Protests, which started in the northwestern Kyrgyz town of Talas on Tuesday, spread to other regions of the Central Asian country, including the capital Bishkek. Close to 400 people were injured, according to health authorities.

Opposition leader Omurbek Tekebayev claimed the death toll was some three times as high as the official figure of 40.

"Today we went to a meeting with the government so they would lay down their arms and transfer power," Tekebayev, who leads the Ata-Meken opposition party said on national television, which is now controlled by protestors.

He added that special volunteer groups would be set up to ensure order in the country.

Police estimated that there were several thousand protestors on the streets of the capital.

Opposition supporters have seized a number of state organizations in Bishkek. The Government and opposition leaders have now agreed to start talks.

"Preliminary consultations between the official authorities and oppositional leaders on halting the clashes have started," Elmurza Satybaldiyev, the state advisor on defense and security told Kyrgyz news agency 24.

"We have received several proposals [for talks]. The opposition leaders are now getting together to discuss the possibility of negotiations," the leader of an oppositional party Ak-Shumkar, Temir Sariyev, told journalists.

Kyrgyz President Kurmanbek Bakiyev declared a state of emergency earlier on Wednesday and the Kyrgyz parliament urged citizens to be reasonable and condemned the destructive activities, local media said.

A source in Bakiyev's entourage denied claims that Bakiyev left the country, earlier voiced by some media with reference to opposition. "The president is in the government building," the source said.

Most of the opposition leaders, detained earlier during protests in Talas have been released, a human rights activist said.

Kyrgyz protesters seized the building of the state television channel KTR in Bishkek earlier on Wednesday. Broadcasting was interrupted for approximately one hour, after which opposition representatives and human rights activists appeared on air, giving information about the clashes.

State TV employees told RIA Novosti that protestors seized the building, which had been ransacked. They said some staff had escaped but others were trapped inside.

Some reports say that protesters have also seized government buildings in the Chuysk, Narynsk and Issyk-Kul regions.
Prime Minister Vladimir Putin called on the Kyrgyz government and opposition to restrain from violence.

"No matter what is going on there - it's Kyrgyzstan's domestic affair. The only thing I ask is that the authorities and opposition demonstrate restraint and refrain from violence," Putin said at a news conference.

Russian Foreign Ministry spokesman Andrei Nesterenko said: "As we are interested in preserving political stability in a country that is friendly to us, we consider it important to resolve the issues raised by the current situation by legal means." He added that Russia urged both sides to avoid violence and bloodshed.

Kyrgyz Prime Minister Daniyar Usenov said he was disappointed with the way the Russian media has covered the political unrest in the country and officially complained to the Russian ambassador.
According to a Russian diplomat in Bishkek, the ambassador rejected the prime minister's complaint.

A Russian deputy foreign minister said the Foreign Ministry opposes recent falsifications in the media which try to link the ongoing unrest in Kyrgyzstan with a certain Russian stance.

Major political unrest started in Kyrgyzstan last month, with opposition forces accusing the government of tightening its grip on power while failing to bring stability and economic growth.

The situation escalated on Tuesday, when several opposition leaders were arrested after police and activists clashed in Talas, and the unrest spread on Wednesday to the central town of Naryn and Tokmak, 50 kilometers east of Bishkek.

At a news conference in Bishkek on Wednesday, Usenov called the protests in Talas, where protesters seized the regional administration building, a crime against the state.

"We are not talking about opposition's protest actions but about committing state crimes," the prime minister said, adding that Kyrgyz Interior Minister

Moldomusa Kongadiev arrived in Talas on Wednesday morning and additional police forces had been sent to the city.

Adilet Eshenov said the protesters had entered the building and held talks with the governor. He added that the police had not tried to stop the demonstrators.
The Kyrgyz Interior Ministry denied the government building in Naryn had been occupied, but confirmed there were protests in the city.

"There is no seizure. An unauthorized rally is being held in front of the regional administration building, attended by 1,200-1,300 people. There have been no public order arrests," a spokesperson told RIA Novosti.

Witnesses said protesters in Tokmok seized a Chuysk regional governmental building and some police officers had been injured.

Almazbek Atambayev, the former prime minister and current leader of the Social Democratic Party, was detained at his home on Tuesday evening. A journalist and a cameraman of the local television company StanTV, who were interviewing the politician when police arrived, were also detained. They were later released, but the camera was seized.

Kyrgyzstan, where Russia and the United States both have military bases, has been unstable since Bakiyev came to power after the so-called tulip revolution, toppling his long-serving predecessor Askar Akayev in 2005.

UN Secretary General Ban Ki-moon visited the country last week as part of a tour of former Soviet Central Asia and called on the authorities to do more to protect human rights and press freedom.