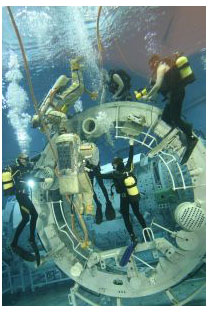 Recently, doctors in Moscow selected 11 people for an endurance simulation flight to Mars. The “cosmonauts” will spend 520 days in a confined space isolated from the world. The experiment, called “Mars-500,” will cost $20 million. Will the result justify the huge expense?
Mars-500 is by no means the first attempt to launch people into outer space without sending them beyond the Earth’s orbit. Russia has been staging such experiments since the 1960s. The longest experiment was “A year in an Earth-bound spaceship.” The actual name was “Year-long medical-technical experiment.” According to German Manovtsev, one of the guinea pigs in the experiment, journalist coined the term “earth-bound spaceship” later. Volunteers – a physician, a biologist and an engineer – spent 365 days, from November 1967 to November 1968, in a small room. To simulate weightlessness conditions, the crew simply moved as little as possible.

Two years after the experiment, a Medical-Technical Experimental Complex – a system of boxes equipped to create the closest approximation to the conditions of a real interplanetary flight – was built in Moscow. It contains five boxes. Three are living quarters of the cosmonauts, where they conduct experiments while their condition is observed. The fourth box contains clothes and food and a greenhouse where the crew can grow “vitamins.” The fifth box simulates the Martian surface and the members of the crew must wear space suits to enter it.

The massive structure enables doctors and medical professionals to study how the human organism can endure prolonged isolation, unusual routine and unusual external effects. Although the heroes of sci-fi space odysseys travel the length and breadth of the cosmos, how man would react to living outside the Earth’s orbit is still unknown. It could still turn out that a prolonged stay in outer space would be fatal to humans.

Before the manned space flight era began, scientists put animals into orbit to determine whether enzyme organisms could survive at a long distance from their mother planet. Being in orbit was obviously not good for the health of rats and dogs – for example, the dogs Veterok and Ugolyok were totally bald following a 22-day flight – but at least they lived.

After the animals, it was man’s turn. Yury Gagarin, Alexi Leonov and their many successors proved that it is possible to live and work in space. The astronauts who set the record for duration have worked in orbiting space stations that have been regularly visited by other astronauts and from which they could be evacuated in an emergency. No such comforts can be expected in interplanetary flights. A mission to any planet in the solar system and the return journey would take several years, there will be no rotation of crews and evacuation is out of the question.

The Mars-500 experiment is designed to prepare future explorers for the difficulties they may encounter. It is to be the longest of all the experiments designed to simulate a space flight. The longest simulated space flight to date lasted 240 days. Preparations for the ambitious experiment have already been extensive: First, the volunteers were tested in a two-week “flight” and then in a 105-day “flight.”

The 14-day experiment took place in 2007, and its main goal was to test the technical characteristics of the experimental modules (the “cosmonauts” inhabited two of them). The next stage was a serious study of how six men could get along with one another over a long period of time. Additionally, the organizers were checking whether the crewmen could freely communicate with Mission Control. Messages were transmitted with a delay of 20 minutes, the amount of time a signal takes to travel from Earth to Mars and back. During the “flight,” scientists watched how the cosmonauts reacted to various situations, such as a malfunction of simulators, loss of contact with Earth and depressurization of the “spaceship.” Finally, over the 105 day period all the equipment and systems were thoroughly tested and “debugged.”

The results of both rehearsals of a flight to Mars were highly successful. The crew members felt fine, none needed medical assistance during the flight and no friction arose among them.

Round trip
The start date of Mars-500 has been postponed more than once. Initially, the cosmonauts were to be locked up in the experimental module for 520 days in late 2009. The latest information is that the “flight” will start this spring. Only six of the eleven men picked will actually take part in the experiment. Until January 2010, the crew consisted of four Russians and two Europeans (Mars-500 is a joint experiment with the European Space Agency), but later it was revealed that a Chinese citizen would be included in the group of candidates. Whether he will be in the final crew will not be known until the very start of the experiment.

The job of the participants in the third experiment will be more challenging than that of their predecessors. During the first 250 days they will reach Mars, and then spend 30 days in the orbit around and on the surface of Mars before departing on the 240-day return journey. During the flight, the crew will perform their technical duties to keep the “spaceship” working, regularly report back to Mission Control, track environmental parameters and administer various tests to themselves. True, the crewmen will be spared some of the hazards of the experiment. For example, rhesus monkeys will be used to study the impact of radiation.

The oxygen content in the modules will be reduced and the argon content increased. Lower oxygen concentration reduces the chances of a fire, but the impact of the changed atmosphere on human health is still unknown.

The Earth-bound managers of the experiment will perfect methods of monitoring the state of the spaceship and the crew, and practice telemedicine (distance treatment). Throughout the experiment, doctors will also watch a control group of healthy volunteers in ordinary conditions and compare it with changes in the state of the “cosmonauts.”

The estimated cost of the Mars-500 experiment is $20 million, the bulk of which will be put up by the Russian space agency Roskosmos. Each of the “cosmonauts” will earn $68,000 earned. The sums may look sizeable, but they are not remotely comparable to the cost of a real mission to Mars. However, the results of the simulated mission will help scientists reduce the cost of the real Mars mission.

Mars-500 of course will not give a complete idea of the future mission. First, the Institute of Medical-Biological Problems will not maintain constant micro-gravitational conditions in which real cosmonauts would have to spend almost the whole 520-day period. Second, the crewmen will not be exposed to the cosmic rays that are a big potential health hazard. Third, in spite of all the attempts to bring the conditions of the experiment closer to actual conditions, the “crew” are very well aware that nothing threatens their lives and that they are only separated from the Earth by a thick wall.

Even so, the significance of the Mars-500 experiment should not be underestimated. The experiments with volunteers who flew into space without getting up from their beds have enabled scientists to study the impact of adverse extraterrestrial conditions on humans and come up with methods of rehabilitation and damage control. Even if the simulated Mars mission does not yield all the information on space conditions, it will clarify many important aspects. For example, it may turn out that people are unable to endure such a prolonged state of isolation. This fear, along with the exorbitant cost of manned interplanetary flights, is one of the main arguments against a mission to Mars.

Yet even in that case, the results from Mars-500 will be useful. Fundamental research does not necessarily have to yield immediate practical benefits. As the physicist Lev Artsimovich said, “Science is the best way of satisfying your personal curiosity at government expense.”