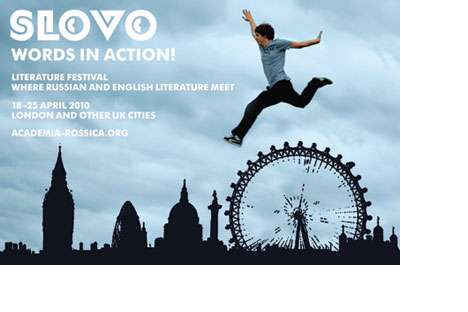 The Russian Literature Festival SLOVO will take place in London on April 19-25. This event is timed to coincide with the 2010 London Book Fair. Russian writers and poets will be presented not only to residents of London but to publishers from all over the world.

Next year Russia will be Guest of Honor at the London Book Fair. So the SLOVO Festival will serve as a sort of preparation for that event.

The Festival’s organizer, Academia Rossica, will present not only stars of contemporary Russian literature, such as Sergei Lukyanenko, Dmitry Bykov, Olga Slavnikova, Maria Galina, and Vladimir Sharov, but a new generation of writers. The program will also include readings by contemporary poets and evenings of videopoetry. The appearances by writers will be accompanied by discussions about current literary processes in Russia. All aficionados of literature will have the opportunity to talk to leading Russian writers and poets. As always these meetings will take place at Waterstones on Piccadilly. However, since the hall in the largest bookstore in Europe is not large enough to accomodate all those wanting to hear excerpts from new books by Russian writers, additional meetings will take place at Waterstones in Hampstead, the Apollo movie theater and the Calvert 22 Gallery.

The SLOVO Festival was launched three years ago when Academia Rossica first invited famous Russian writers to London. Those first appearances were part of Russian Literature Week. Within two years the meetings with Russian writers had become so popular and the program so full that the organizers decided to give the festival a name and today it is officially known as the Russian Literature Festival SLOVO – WORDS IN ACTION!

Every one of the Festival events is prepared jointly by Russian and British writers. For instance, if the program includes an evening of poetry, then Russian poets will read their poetry in Russian, while English poets will read translations of their poems. To hear the best Russian poets reading their poems in Russian and English in London is an unprecedented event. And the discussions afterwards promise to be no less compelling. The dialogue between the Russian and English literary cultures will touch on both film and videopoetry — a new genre at the junction of literature and film. In a word, “Words in action”.
Every evening the organizers will try to present something new. For example, they will host the London premiere of a film by the Dutch director Alen van der Horst about the poet Boris Ryzhy. In his film van der Horst asks what made this talented young poet kill himself. His film, which has won numerous awards, is not only about Borish Ryzhy, but about what it means to be a poet in Russia, and what it means to be a poet in general. Viewers will be able to discuss their impressions of the film with van der Horst and with other Festival-goers.

They may well include fans of fantasy and magic realism. This year the SLOVO organizers will emphasize precisely these genres. Sergei Lukyanenko, Dmitry Bykov, Maria Galina, Vladimir Sharov and other authors will present their latest books and tell you why in Russian literature these genres have such a strong tradition and how contemporary writers compare themselves to Gogol, Bulgakov, Zamyatin and Platonov. Why does Russian literature tend to view the real through the prism of the unreal? That will be the subject of a talk by Afisha literary critic Lev Danilkin.

In addition to conversations with distinguished writers, Festival-goers will meet young authors just starting out. In addition to her literary work, Olga Slavnikova is director of the prestigious Debut Prize. This year she will bring six Debut winners with her to the Festival so as to present their new books to British publishers. Polina Klyukina from Perm, Alisa Ganieva from Dagestan, and Alexander Gritsenko from Astrakhan are rising stars of contemporary Russian literature. The Festival’s geography is not confined to Moscow and London. The organizers will try to acquaint the London public with writers and poets from all over Russia.

For a complete program of the SLOVO Festival go to the Academia Rossica site: www.academia-rossica.org