Looking for the future in Kyrgyzstan 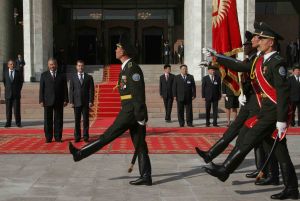 Today any expert who begins a conversation about recent events in Kyrgyzstan runs the risk of being late with his assessments and prognoses. The situation in this small nation in Central Asia is rapidly changing, and I doubt that anyone would make the claim that this latest revolution is over. Indeed, this is the second time five years that power has changed hands by means of revolution. This is an extraordinary event even for post-Soviet space where the biggest problem remains political continuity.

However, certain preliminary conclusions about this new “Kyrgyzstan Spring” can be drawn. Moreover, this latest revolution allows for some fundamental pronouncements about the nature of the political and socio-economic “transit” of nations in Central Asia, a region of critical importance for global security as a neighbor of Afghanistan, Iran, China and Russia.

1) The formation of new nation-states practically from scratch. These republics had no experience in contemporary sovereign statehood, while appeals to medieval history were of little use for nation-builders at the turn of the 21st century.
2) The rapid growth of a radically politicized Islam. The civil war in Tajikistan from 1992 to 1997; the creation of an Islamic Movement of Uzbekistan in 1996 that strove to control the Ferghana Valley and signal raids by Islamists in Kyrgyzstan in 1999 were all indicators of this shift.
3) Lagging modernization as a result of the technological and economic backwardness of these republics

The events of 2005-2006 showed that the era of “peaceful” and “velvet” revolutions on post-Soviet soil was coming to an end. The revolutionary “concert” in the European part of the former Soviet Union was over. Now it was the turn of Central Asia. As per Lenin’s teachings about revolutions, Kyrgyzstan in March 2005 turned out to be the “weak link.” In the opinion of French Orientalist Olivier Roy, the quick revolution in Kyrgyzstan was the natural result of political development in that country in the post-Soviet period.

“In the smallest state in this region, we found the same tendency as in all the neighboring states in Central Asia – the tendency for authoritarian and even dictatorial regimes to emerge. At one time there was talk of a “Kirghiz exception.” President Askar Akayev was considered a reformer, more democratic than his colleagues in the former Soviet republics. In fact, the specific nature of Kyrgyzstan lies in that the central power there is weaker than elsewhere. There is no strong army, no strong organs of internal affairs, but there are many local police units. This structural weakness did not prevent the president, elected in Soviet times and regularly re-elected thereafter, from conducting the same political line as his neighbors: including arrests of opposition members, falsification of elections, removal of political rivals.”

Though Olivier Roy is right overall, I would like to define several positions more precisely. The elites of all post-Soviet states in Central Asia had an extremely narrow corridor of political opportunity owing to the nature of the modernization processes in the Islamic East. In my view, to inscribe “revolutionary processes” in awakening Central Asia in the context of modernization in the Islamic East is an extremely important task that will combat oversimplification and find a way to a more adequate understanding of events.

Until now, Islamic states have seen the successful implementation of two models of development. One is the authoritarian secular regime with all its attendant shortcomings (clannishness, nepotism, corruption); the other is the Islamic theocracy. With regard to Central Asia, Oliver Roy has described the authoritarian model: “Here you have a presidential structure of the family type: wife, brothers, and sons of the head of state divide up the top jobs and lucrative posts, relatives become deputies with a ‘Soviet’ rating.” However, as a rule, it is precisely these regimes that bet on socio-economic modernization – the adoption of market institutions, the creation of conditions for the development of social groups in bourgeois society – and on secular development. Given this model, the role of religion in politics is kept to a minimum or even excluded. Egypt, Jordan, and Indonesia are the most successful exponents of this model. The height of its political development is a peculiar version of democracy under which the personal power of the country’s leader, the army and the security organs continues to play a major role. The most striking example of this is Turkey.

As Newsweek’s Fareed Zakaria has correctly noted, in the Islamic East today there are two possible types of “democracy.” The first is a liberal despotism (liberal dictatorship) under which the authorities conduct Westernization with an iron hand and with the help of nationalist ideology. “The greatest modernizer in the Middle East — Turkish leader Kemal Atatürk — was able to radically change his country in large part thanks to his solid reputation as a nationalist. He came out against Western powers, although he Westernized his country,” writes Zakaria.

The second type of “democracy” in the East is “non-liberal democracy,” pure window-dressing under which election procedures and other democratic elements conceal corruption, the privatization of power and a disfranchised population. It is this type of “democracy,” Zakaria considers, that leads to the victory of religious fanatics and proponents of a “pure faith.” This model is based on an ideology of religious “revival” based on Islamic dogma. Iran after 1979 and Pakistan under Zia-ul-Haq are models for builders of a theocratic state system.

At the same time, Eastern states that have bet on socio-economic modernization find themselves in an odd trap. On one hand, the process of renewal requires one to look to Western experience. Here you cannot do without European and American universities with their spirit of democracy and freedom, their apologetics of individualism and personal success. A Western injection of this sort to a system of traditional patron-client relations works against the initiators of modernization. Sooner or later the young “renewers” will crowd out the elite and begin screaming about political stagnation. On the other hand, socio-economic transformations violate the traditional pillars of Eastern society unaccustomed to individual success and loath to accept the necessity of market competition, especially in the intellectual-spiritual sphere – hence the fundamental reaction to innovations, the striving to withdraw into one’s “uniqueness.”

Consequently, the post-Soviet states of Central Asia face a difficult dilemma. They must catch up to the civilized world, but that pursuit is fraught with two dangers: the Europeanization of the elite and the archaization and Islamization of the population. With certain exceptions, the Central Asians states have lived through all these upheavals. Here the project of modernization was realized with a controlled dose of democracy – not long before his overthrow Kurmanbek Bakiyev called it “combined.”

Is this variant good or bad? It’s a rhetorical question. This “third way” is at the least highly vulnerable. It reveals both poor manageability and insufficient democracy. And it resulted in a “tulip revolution” and now a “revolution without tulips” in Kyrgyzstan, and cases of mass unrest in Uzbekistan.

Sergei Markedonov is a political scientist and an expert on the Caucasus and Central Asia.