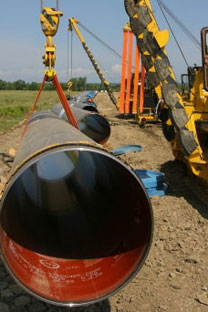 Algeria, the country to host the Gas-Exporting Countries Forum on April 19, 2010, started sounding out the international reaction to the plan to convert the so-far consultative group into a gas analog of the OPEC oil cartel. Algerian Minister of Energy and Mines Chakib Khelil called for gas export cuts to put a floor under the declining natural gas prices.

The media cited extensively Khelil's March 18 statement at the OPEC session in Vienna that the amount of natural gas on offer globally should be reduced to restore the balance between supply and demand. As the host of the coming forum, Algeria is in charge of the agenda which, based on the assessment of the current state of the gas market, it plans to center around the task of tightening the coordination between gas-exporting countries. The forum's permanent members are Iran, Bolivia, Algeria, Russia, Qatar, Egypt, Venezuela, Nigeria, Libya, Equatorial Guinea, and Trinidad and Tobago.

There may, however, be quite different approaches to coordination. Judging by Khelil's statement, the forum is supposed to introduce gas export quotas to exert upward pressure on gas prices. This, however, is exactly the cartel practice meeting with resolute opposition from gas buyers.

At the moment the gas market is in such condition that even Algeria, the country traditionally more cautious than others about hurting buyers' interests, is forced to push for export caps. Clearly, the measures would mainly affect LNG suppliers. The US breakthrough in the sphere of untraditional types of natural gas production, in the development of shale gas deposits in particular, combined with the global economic downturn and the LNG supply surge caused an oversupply of gas on the US market — one of the world's largest - and practically sealed it off for suppliers. LNG suppliers who eyed the US market and invested heavily in upgrading gas liquefaction and transit capacities were hit most by the situation. In Asia Pacific alone, the LNG capacities to come online in the short term total 34 bn cu m. As for Europe, the launch of Qatargas-2 and Ras Laffan-3 plants in the Middle East with the total output of about 40 bn cu m also left its market oversupplied. According to Wood Mackenzie estimates, the European gas market capacity in 2010-2012 (excluding long-term contracts ant take-or-pay schemes) will be somewhere at 70 bn cu m, while the supply will likely reach 140 bn cu m of pipeline gas and LNG.

The International Energy Agency says at present the LNG supply exceeds demand by 30%. The LNG volumes that could not be fed to the US promptly found their way to the European and Asian spot markets, causing a price collapse — the spot market gas prices at the moment are a factor of 2.5 lower than at the peak of demand in 2008. The forecast by the Financial Times is that by the summer the spot prices will sink to $110 per thousand cu m - a record-low over eight years. In the meantime Russia, for example, is earning $230-250 per thousand cu m selling gas in accord with long-term contracts. Not surprisingly, buyers are minimizing the amounts of gas taken in their framework due to the availability of much cheaper gas and pushing suppliers to renegotiate the contract clauses like take-or-pay which guarantee sellers certain sale volumes.

Russian Vedomosty daily quoted Russia's Deputy Energy Minister A. Yanovsky as saying that the Algerian export cuts proposal did not resonate with Moscow since Russia's gas export is based on long-term contracts. The statement could be the result of miscalculation – the tendency to minimize the amounts of gas consumed in accord with the take-or-pay scheme and to switch to the spot market can eventually compel sellers to agree to lower minimal contracted deliveries. The evolution would affect both pipeline gas sellers and LNG suppliers. Last year the latter already had to start offering their clients previously unthinkable perks like flexibility in delivery volumes or joint ownership of LNG projects. The pricing situation also leaves LNG suppliers with a lot to worry about – by October, 2009 the JCC (Japan Cleared Cargo) LNG price was 14% below the parity price based on comparing the gas and oil specific heat capacities.

The pipeline gas business fares no better. Gazprom had to serially waive fines for taking less than the contracted amounts and, worse than that, found itself drawn into undesirable negotiations over easing the requirements set by the already existing contracts. The Russian energy giant is forced to sacrifice revenues and guarantees to maximally preserve sales volumes. The contraction of gas demand echoed with an over 50% reduction of the revenues generated by the Russian gas export to Europe.

Evidently, conditions will continue to deteriorate, and the market will be increasingly dominated by buyers. The theme was discussed on March 22 in the Institute of World Economy and International Relations of the Russian Academy of Science during the presentation of a report jointly compiled by the World Energy Markets Research Center of the Energy Research Institute of the Russian Academy of Science and Wood Mackenzie. The study entitled The New Era For the Russian Gas Sector: In Search of Balance described the volatilities Russia's gas industry is likely to be confronted with till 2030. The unchecked accumulation of LNG facilities will be driving ever more intense competition between LNG and pipeline gas and between various suppliers over markets. The study contained no mentioning of orchestrated gas offer reduction, but the ideas and forecasts in it seem to reinforce the case for it. Chaotic proliferation of LNG facilities and injection of gas volumes that markets are unprepared to accommodate – with no underlying philosophy whatsoever - are the key causes of the current price collapses and future uncertainties.

Chances to safeguard the interests of suppliers with the help of long-term contracts and take-or-pay arrangements of any kind are slim. Nor should anyone expect the schemes to be instrumental in keeping market shares or sustaining sales volumes. The entrenched egoism in the ranks of gas suppliers has already given serious advantages to buyers, and Khelil's call for coordination among gas-exporting countries is by all means timely. Hopefully, the call will be heard at the Gas-exporting Countries Forum in Algeria.

There are indications that Moscow's position is drifting towards that of Algeria. Russian Prime Minister V. Putin said during the meeting with Prime Minister of Qatar Hamad bin Jassim Al Thani on March 23 that as the world's two major energy suppliers Russia and Qatar should coordinate their activities on the gas market. The coordination on the European market between Russia, Algeria, and Qatar (the trio Iran, Venezuela, and Oman will definitely join) should open new horizons in stabilizing the European gas market, perhaps at the cost of a temporary reduction of gas offer.

Experts in Europe are also becoming aware of the benefits of regulation and coordination on the gas market which is growing unacceptably volatile. Jonathan Stern, analyst at the Oxford Institute for Energy Studies, says: “I don’t think we are at that stage [of a gas cartel] yet. But if prices fall further, we may find ourselves in a different situation by the middle of this year. Cartels work when producers are in dire straights.”
___________________________

Igor Tomberg is the Director of the Energy and Transportation Studies Center of the Institute for Oriental Studies of the Russian Academy of Science and Professor of the Moscow Institute of International Relations of the Russian Foreign Ministry.
http://en.fondsk.ru/print.php?id=2880