Expats bet on soup as a fast-food winner 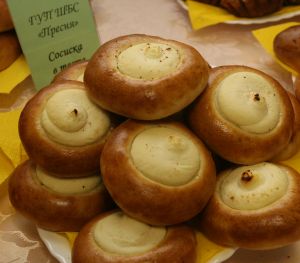 Russia, a country with an exquisite soup culture, has never been able to enjoy homemade soup on the go — that is, until a group of expats came up with the idea of serving it on the streets.

A new chain called Soupchik opened its first location near the Smolenskaya metro station on April 8, and the second stand, located near the Novoslobodskaya metro station, opened Tuesday. The third is scheduled to open in early May at the All-Russia Exhibition Center.

"I always said this country is brought up on soup, yet there is no place to get it quickly," said Cathal Lyons, chief executive of Soupchik and one of its four expat investors.

Soupchik has 22 soups on its menu, with six, including borshch, solyanka and chicken-noodle soup, available year-round, and the rest being seasonal offers. The company also sells baked rolls and pirozhki, or Russian pies.

In the summertime, cold soups such as gazpacho, svekolnik and okroshka will be available. Autumn and winter offers will include gulyash, kharcho and cream soups such as tomato with croutons, celery and broccoli.

Irish-born Lyons, a former partner at accounting firm Ernst & Young with experience in the food business, first came to Moscow in 1991. He said the basic idea of Soupchik is to sell the same soups that people commonly eat at home.

"Although there are many restaurants, you have to pay 400 to 500 rubles for a bowl of soup, which will be a fancy cream soup that is a little bit alien to this country," he said.

"Most soups [sold on the street] come out of a packet, which just totally goes against what Russians think of their soup as — something that's made by their babushka," Lyons said. "We're focused on selling 100 percent natural products being made every day, early in the morning, and brought to our locations."

Lyons would not specify the amount of investment put into Soupchik, saying only that it reached "hundreds of thousands" of dollars.

The other investors are Canadian Alex Shifrin, American-born Sam Rothman and Alejandro Ouziel from Spain.

"The only hurdle I think of is answering the question, 'What do you mean, soups to go?' because people like to sit down and eat their soups. So it's about introducing the idea that you can take your comfort food with you," Shifrin said.

Navigating the city's competitive fast-food market isn't for rookies, said Lyons. But Soupchik skirted most bureaucratic hurdles because the authorities were charmed by the concept, he said.

"We had a lot of help, unwanted help, because officials enjoyed the idea. … The reaction by one of the female officials was, 'Oh, that's great!' and she issued all the documents to us in two weeks. She went straight to her boss" to speed up the process, Lyons said.

But meeting fire safety rules was difficult, he said, adding that the fire safety office has been crowded with businessmen.

After a blaze in a nightclub in Perm that killed 156 people in December, the authorities have stepped up efforts to make sure that businesses strictly comply with fire safety rules. Soupchik “almost had to go back to the beginning and do the process of getting all the certificates again,” Lyons said.

Even though overregulation and corruption are widespread in Russia — leading President Dmitry Medvedev to call on officials two years ago not to "make life a nightmare for business" — it is not really a big problem here, said Shifrin, who has 12 years of experience working in the country.

The problem is that a lot of Westerners starting a business in Russia lack knowledge of how things are done here, Lyons said. "A lot of foreigners come in here with this idea to change things. I've seen that since 1991. And Russians actually don't want to change anything. They are quite happy with the way it runs," he said.

"It's not like you come [to the authorities] and say, 'I want to do this and this because this is how it works in New York.' Who cares about New York?"

Lyons is optimistic about the future of the soup chain. The company hopes to have 20 locations by year-end and 70 locations by the end of 2011 in Moscow, followed by expansion into St. Petersburg and other major cities.