No shortage of space goals 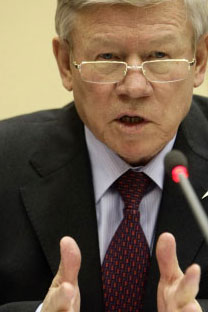 Rossiyskaya Gazeta: A team of six people is working at the International Space Station now, including Russian newcomers Alexander Skvortsov and Mikhail Korniyenko. They both waited for thirteen years for the ISS mission. How many cosmonauts do we have in Russia today, and how many of them have not made it to the orbit yet?

Anatoly Perminov: Thirty-three cosmonauts are currently training with the Russian Space Agency. Nineteen have not been in space yet. Indeed, Alexander and Mikhail had been through a very long preparation. They have a difficult programme, especially given that another research module will be brought to the station in May. I am sure that they will be up to the task.

I know that new recruitment for the cosmonaut team will take place shortly. Is there at least one woman among the candidates?

Yes, there will be new recruitment. We will select eight candidates. As far as I know, there is a woman among the applicants.

Today, the number of flights to the ISS is twice as high as before. How many spacecraft will be launched before the end of the year?

Eight: three Soyuz TMAs and five Progress-M cargo vehicles. They will take nine cosmonauts and astronauts to the ISS, and another nine will be returned home.

Yes. Space agency chiefs met in Tokyo recently and decided not only to extend the life of the ISS until 2020, but also to assess the possibility of extending the resources of its basic elements until 2028.

It is clear that the ISS is a scientific project, in the first place, but could it be commercially viable too?

Initially, such objectives were not considered. In the first place, the station must function as an orbital space laboratory. Yet, certain commercial projects are quite possible, and they are not prohibited by partners.

After the shuttle programme shuts down, the main burden of taking crews and cargos to the station will be borne by Russia, won’t it?

Regarding the delivery of crews, yes. As for equipment, the European Space Agency’s ATV and Japan’s HTV spacecraft will also be deployed, along with Russia’s Progress-M. Besides, private US launch company SpaceX is developing its Dragon vehicle to carry cargo to the ISS.

To be honest, our space programme is being criticised for lack of potential. They say that Mars cannot be an ultimate goal, and that each generation should have its ambitious space projects. Do you see the rationale behind this idea?

Certainly, there is the rationale. Indeed, we need significant and clear goals. However, at the same time we also need specific proposals on how to achieve those goals. We are on the brink of a new era in space exploration, which will see the transition from earth orbits further into space. This step is very difficult, it requires new technology and new resources; new technological solutions are needed, including in the sphere of engine development.

Are you deploying researchers?

How can we do without them? Our experts, in cooperation with the Russian Academy of Sciences, are working on these problems. Towards the end of the year, I hope, we will get answers to many questions, including on how the Russian space industry should develop and what specific actions are to be taken starting from next year to speed up the process.

So, will we fly to Mars?

We do not yet have the technology for interplanetary piloted missions. The Moon and Mars are the targets, the achievement of which will allow us to develop and test such technology.

How long will it take?

At least twenty years, even given the rapid pace of research and technological development we enjoy today.

And what will be our further goals?

For example, the moons of giant planets are extremely interesting, especially in terms of scientific research. There will be no shortage of goals for our future piloted space missions.

By 2012, the Russian Federal Space Agency plans to present the draft design of a nuclear engine for a piloted spacecraft. How much money and time will it take to complete the project?

Tens of billions of roubles will be needed for the creation of such a nuclear propulsion facility. The completion of ground tests is scheduled for 2018.

There’s another question I cannot but ask: when will space tourism resume?

At this point, I cannot give you any positive answer. There is no such possibility now that the ISS team has been increased to six people.

Some foreign companies have shown interest in buying a Soyuz spacecraft together with a captain for tourist flights. What do you think of such ideas?

To go ahead, we need to make additional piloted spacecraft, which is a big problem. First, the overall production cycle of a spacecraft is two and a half years. Besides, we have a very tight schedule of Soyuz and Progress launches for the next few years – about ten a year.