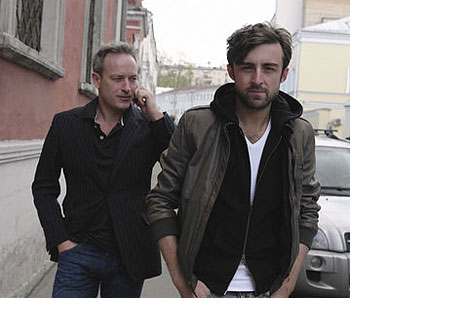 A British entrepreneur and a former Russian hacker have experienced the pitfalls of doing business in Russia while striving to launch a new commercial website.
In the West, setting up a successful online business is hard. You have a good idea, capture users, then find some investment and earn some money. But doing it in Russia seems to be nigh on impossible – entrepreneurs in Moscow have all these problems and more.

That hasn’t stopped British-born Simon Dunlop and his Russian partner Alexei Ostroukhov from teaming up to attempt what is arguably the first serious attempt by entrepreneurs to establish an online business of any scale in Russia.

The idea is to launch a music, book and movie platform that will make money from catering to the huge, pent-up demand in a market of 65 million online punters in the former Soviet Union.

The company faces every possible problem. There are only five people in the whole country who are investing in technology, media and telecoms, estimates Dunlop, despite Russia’s enormous oil wealth. As only one in four Russians has a bank account, let alone a credit card, it is extremely difficult to get paid, even if your service is successful. And music piracy is so rampant that none of the international music companies has bothered to invest a penny. Oh yes, and they set the business up in the middle of last year’s crisis.
“It sounds scary but it makes sense. We are clearly at the bottom of the cycle now. Last year it was better to build something new than try to fix something that was clearly broken,” says Dunlop who has provided a big chunk of the initial capital.

So why bother? Because the upside for any successful business in Russia is so enormous. The internet is growing exponentially. The very underdeveloped nature of the retail sector means if the site is successful, buying movies and music online will be the mainstream distribution channel for these products, rather than the add-on it is in the West. And while the Western internet is already crowded, they face almost no competition.

The book site, Bookmate.ru, is already up and running, and the movie platform will come next year; the flagship music site, Zvooq.ru, will launch in a few months’ time and will be the making or breaking of the venture.
Dunlop and Ostroukhov are about we well qualified to make this business work as anyone in Russia.

He has no formal education but stumbled across computers in the early 1990s shortly after the fall of the Iron Curtain.

He was so good that in the mid-Nineties he was tracked down by a major US-based network security firm in London and persuaded to join their team fighting off hackers for large corporations. He was only 17 years old at the time.

Dunlop has an equally colourful story. He was sent to Moscow in 1992 while still in his twenties by British company Lonrho with the first container of legally imported Marlboro cigarettes and told to set up a distribution company.

It took a week to sell the container and get orders for 60 more. For the next few years, he helped build a multibillion-dollar cigarette distribution business for Philip Morris before leaving to become a serial entrepreneur.

The concept is to move all your content – text, music and video – off your computer’s hard disk and onto a server, freeing yourself from devices in the process.

“Zvooq.ru is not a music store in the traditional sense,” says Dunlop. “It is more like a library where you pay to come in – but once you are there you can stay as long as you like and take as many books off the shelf as you like . ”

He hopes that the site will break the Russian market open for international media companies who can’t hope to compete against the current flood of pirate copies.

“The site will be a revolution for the music industry, as for the first time they will have a legal channel to both distribute and promote their products across the entire former Soviet Union,” says Dunlop. “And the artists are particularly keen, as, with Zvooq.ru, we will democratise the music business.
“There is no distribution for anything in Russia that reaches right across the country or the 65 million online consumers across the whole CIS. It is a huge untapped market. What we can do is skip over the phase of setting up physical shops and reach this market immediately by selling to them online.”

The next challenge will be to raise money to take the project to the next level. As investors are able to make 30pc-50pc returns on doing little more than putting German sausage equipment into Siberian meat factories, few are interested in the high risks and long payback terms most hi-tech investments need to turn a profit.

“There are investors out there with a lot of money ; the trouble is most don’t understand this type of business,” says Dunlop, who intends to go to international funds once the site is up and running.

“But the internet is growing so fast here that the missing logistics are already starting to fall into place.