Putting a net around the world 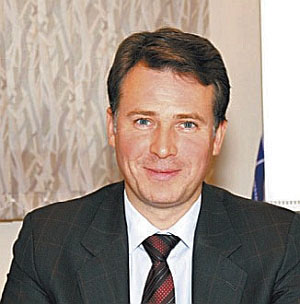 RN spoke to Sergei Pridantsev, CEO of Comstar, one of Russia's leading communication companies, about the country's prospects.

What changes has the Russian telecommunications market seen in the crisis?

The crisis has affected many industries in our country, and that includes communications. People have started trying to save money – and above all, on leisure activities outside the home. So what entertainments are there at home? The television, the internet and the phone. The growth in operators’ subscriber base and traffic volumes has confirmed this. For example, according to various agencies, the growth in the broadband Internet access market across Russia as a whole has been in the order of 30pc. The Comstar company’s subscriber base grew by 41pc in 2009, to 1.3 million subscribers. There has also been a substantial increase in the number of subscribers to pay TV. According to sociologists, sales of television sets in Russia have fallen by just 5pc during the crisis. Some experts are expecting that as early as the second quarter of 2010 some purchasers will translate their plans to get a new television set into action. That means there will be more people buying in to our services.

The crisis has confirmed another axiom – that landline communications are an “anchor” service. In Russia, disconnecting the city telephone is the last thing subscribers do – up to now the landline service has been much cheaper than the mobile system.

Is it possible to say that the crisis in the telecommunications market is over?

For the communications industry the answer is probably yes. The Comstar Group, for example, is this year returning to its pre-crisis level of investment, resuming active expansion into the regions, and resuming its project to digitise the MGTS network in Moscow with IMS technology. Many operators are now announcing plans for active development in 2010.

The main problem for the telecommunications market in Russia during the crisis has been the disruption to credit – at the worst point of instability the Russian banks reduced their activity on the credit market. The loans market only came round towards the end of 2009.

The effect of this on Comstar was minimal, because our debt burden was very low and was practically all denominated in roubles.

What are the current dominant trends on the telecommunications market?

The main driver of growth for operators is broadband access to the internet and pay TV. Broadband access is becoming the dominant service, and the voice communications service is being relegated to subsidiary status. The potential of new technologies, in particular IMS (IP Multimedia Subsystems), is further evidence that this trend is growing stronger. Companies have been staking on the universality of product offerings that combine the potential of wired and wireless technologies. The ones that are emerging as leaders are the universal operators that have consolidated the assets of digital and fixed communications with the aim of seeking out new growth points.

The event of last year was arguably the launch of mobile WiMAX into commercial operation. This service enables us to provide internet access at virtually any point in the city where there is a signal. The service is already spreading rapidly among business people and active middle-income people. Companies working in this market are selling both external modems and built-in ones that are sold with portable computers. Comstar, for example, has brought the ColibriComstar netbook to the market.

Does the owner of such a netbook have access to the internet outside the country?

All the systems for wireless access to the internet are built into the netbook – not just WiMAX and Wi-Fi but also 3G and EDGE. The user can therefore stay connected practically everywhere.

We are currently actively developing the FON project – this is part of the FON worldwide Wi-Fi network, which has more than one million hotspots around the world. A client who is part of this network has free access to the internet throughout the world, wherever there are FON access points.

In 2009 Comstar joined the MTS group – one of the members of the “big three” telecommunications companies in Russia. In what direction will Comstar develop?

We shall be working on three main areas., the so-called “Triple B” – branding, broadband, building. We intend to make use of the very strong MTS brand, cross-sales and joint offerings on the market, and the development of broadband access and joint use of cable network resources.
In 2009 Comstar agreed a share swap deal with Svyazinvest. How is the process going?

I think the swap will be completed in 2010. We shall transfer our holding and debt of 26bn roubles to the state. In this way Comstar will have almost zero debt burden and we shall acquire 23pc of MGTS, the biggest fixed communications operator in Russia. In 2009 we brought our holding in MGTS up to 70pc, and by acquiring another 23pc we shall become effectively 100pc owners of the company.

Our network was originally built on more efficient technologies for packet switching, not channels. This enables us to offer the subscriber broadband access and a whole suite of services – internet, telephone (including long-distance), and TV. The task now facing us in Moscow is to complete digitizing the MGTS network. We plan to complete this process by 2013.

Do your plans also include regional expansion?

This is one of our main strategic areas in 2010. We shall continue modernising the communications network and move into new regions – both by means of organic growth and through acquisitions of communications market leaders. Our goal for the next three years is to increase our presence from 82 cities to more than 200 with 100,000-plus residents.