The EU and Russia: where next? 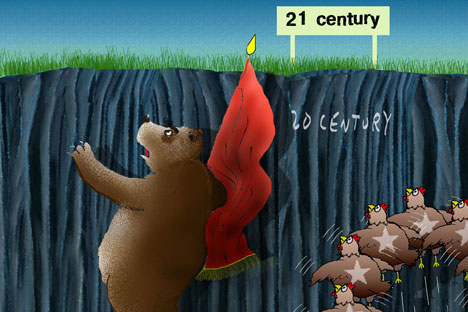 Russia’s reaction to the Polish presidential airplane crash demonstrated that simple human relations are capable of smoothing over even the thorniest historical tensions. Of course, political will is needed as well. In fact, the gradual warming of relations between Russia and Poland did not begin in recent weeks but soon after Donald Tusk became the Polish prime minister in 2007.

Generally speaking, Russia’s foreign policy is reactive by nature, and it responds to both positive and negative stimuli. Tusk’s willingness to be flexible toward Russia – in contrast to his predecessor, Jaroslaw Kaczynski, who made no special efforts to establish a dialogue – has elicited a corresponding response from Moscow. The result has been that the Polish meat problem was resolved in 2008, and the two countries have started a constructive dialogue on different issues, including Katyn.

Of course, internal factors in Russia have also played a role. Two months ago, I wrote in this column that the time when Russian authorities could use the country’s Soviet past as a political tool was coming to an end. Events of this spring confirm this, and the reason is simple: It has become clear that attempts to rally the people around the legacy of former Soviet leader Josef Stalin have not only failed but have provoked futile and pointless controversy. Individual members of the ruling elite, such as mayor Yury Luzhkov, continue to use the Stalinist theme to further their personal interests, but most authorities recognise that playing the “Stalin card” has exhausted its potential and has even become politically risky.

One example of just such an overblown and pointless conflict is found in the objections that leftist nationalist groups have raised over the Kremlin’s decision to invite representatives of the Allied countries to the May 9 Victory Day parade. The hysteria over this desire to give the occasion international significance only demonstrates that with Russian society confused and unsure of itself, there is more to be lost than gained from using World War II to win political points.

Taking a pragmatic approach can reduce the intensity of domestic and international disagreements, but it will not eliminate them. This is because Russia views World War II very differently to way the rest of Europe does.

Russia focuses on the war itself and on its victory over the fascist enemy that threatened the very existence of the country. Any discussion of the price paid for that victory or of secondary motives that the Soviet authorities might have had is considered blasphemy. What’s more, the victory over Adolf Hitler stands out as the most important source of patriotic pride in Russia’s 20th-century history. This explains the fervour over attempts to rewrite the Soviet Union’s role in World War II. Attempts to diminish Russia’s role in the victory are perceived as attempts to undermine the very foundation of the state.

For today’s Europe, the war itself is of less importance than what followed it. In the post-war period, Europe managed to finally overcome the disastrous policies that had led to its collapse in the first half of the 20th century. Two events were of utmost importance. The programme for European integration, begun in the 1950s, marked the end of the French-German confrontation that had spawned both world wars. Also, the fall of the Iron Curtain and the collapse of the communist empire enabled the West to wash its hands of the “sin” of having cut deals with Stalin at Yalta and Potsdam.

In other words, while Russia takes pride in having fended off an existential threat and views that achievement as a geopolitical moment of triumph, Europe experiences shame at having unleashed such a monstrous war and accepted dirty trade-offs after that in the first place. These are two very divergent views of the same historical event. History is important to every nation and serves as a source of political inspiration, especially when the future appears increasingly vague and confusing.

Because Russia and the rest of Europe do not yet have a clear idea of what place they will occupy in 21st century, they cling desperately to the past. In one sense, everything is clear regarding Russia’s position: the country suffered a serious trauma in 1991 when the Soviet Union collapsed, and it is still trying to define its geopolitical identity. It would seem that the European Union has no such problems. Although the integration of its constituent states has by and large proven successful, it is increasingly clear that Europe is losing its global significance and is turning into a secondary player, mired down by its own internal problems.

When Europeans say that their administrative model is in crisis, they implicitly refer to past crises such as the “Eurosclerosis” of the 1960s and 1970s, which they ultimately overcame. In general, the political character of the EU is based on a feeling of phenomenal progress, which Western Europe achieved in the second half of the 20th century. There have been very few examples in history where eternal enemies have been reconciled and where economic expediency has been placed above parochial national ambitions.

At the same time, Europe’s successes mask the fact that these previous results were achieved under unique conditions – a common threat, US patronage and a degree of homogeneity among member states. But since the global architecture has changed so dramatically, it is unclear whether Europe will be able to repeat its successes in the future.

In this sense, Russia and Europe are in a similar backward-looking situation. But considering their vastly different understandings of the past, this similarity may separate them more than it will unite them.