We can curb the  carbon, naturally 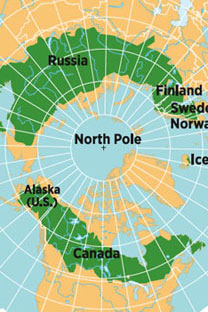 Russia’s northern forests  are magnificent carbon containers, the elimination  of which could bring about catastrophic climate change.
Scientists believe Russia’s ancient forests are the country’s best natural weapon against climate change, even though the stockpile of carbon beneath the ground also makes these areas vulnerable to carbon release.

A recent study found that half the world’s carbon is stored within land in the permafrost region, about two-thirds of which lies in Russia. Overlying former glaciers, they are a coniferous mix called the boreal forest.

“There’s a lot of carbon there and it’s very vulnerable,” says Josep Canadell, co-author of the study. “If the permafrost thaws, we could be releasing 10pc more carbon a year for several centuries more than our previous models predicted. It’s going to cost a lot to reduce our emissions by that much – but it will cost more in damages if we don’t.”

The study was published in June in Global Biogeochemical Cycles . Researchers found that the region contains 1,672 billion tons of organic carbon, much of it several feet underground, that “would account for approximately 50pc of the estimated global below-ground organic carbon”.

Another paper published in Nature in 2008 found that old forests, which make up perhaps half of the boreal forest, “continue to accumulate carbon, contrary to the long-standing view that they are carbon-neutral”.

Even though fires and insect infestations destroy entire swaths of forest and release into the atmosphere the carbon they contain, old-growth forests still take in more than these natural disturbances release, says lead author Sebastiaan Luyssaert, a biologist at the University of Antwerp in Belgium.

“This is all the more reason to protect Russia’s boreal forests,” which take in 500 million tons of carbon a year, or about one fifth of the carbon absorbed by the world’s landmass, says Mr Canadell, who is executive director of the Global Carbon Project, based in Canberra.

Jing Ming Chen, a University of Toronto geography professor who specialises in climate modelling for the boreal region, says: “Cutting boreal trees increases the amount of carbon in the atmosphere and it takes 50 to 100 years to put that carbon back in the ground.”

Luysaaert and Chen argue there’s a strong case for conserving the old-growth forests. “It’s better to keep as much carbon in the forest as possible right now,” Mr Luyssaert explains. “If we want to avoid irreversible processes like melting permafrost or changing ocean currents, we absolutely have to control our emissions in the next two or three decades. It’s a case where you need to be short-sighted to be far-sighted.”

“The threats to the boreal forests don’t seem significant right now,” explains Nigel Roulet, a carbon cycle specialist at McGill University in Montreal. “But I’m convinced pressure will increase as the region gets warmer and it gets easier to operate there.

“Also, I expect these resources to become more valuable as others are exhausted. That’s why it’s important to lock in legislation now.”

Three Canadian provinces and the federal government have done just that, committing to protect 625,000 square miles – half of Canada’s boreal region – and managing the other half in ways minimising carbon emissions.

However, no such policy exists yet in Russia. “I don’t think there is a special plan for increasing these areas,” says Anatoly Shvidenko, a veteran Russian forester who heads the forestry programme at the International Institute for Applied Systems Analysis in Laxenburg, Austria.

Of 2.9 million square miles of Russian boreal forest, an area equivalent to the 48 contiguous United States, only 385,000 square miles is fully protected from logging, says Shvidenko, or about half the Canadian commitments. Logging is restricted in another 580,000 square miles.

Along the borders with lumber-hungry Finland and China, man-made forest fires are estimated to destroy about half of the legal harvest, says Shvidenko. Under Russian law, any protected area that has burnt down – usually leaving the big trunks intact – can be logged commercially. “I would not expect any large-scale logging bans in Russia any time soon,” agrees Olga Krankina, a forestry ecologist at Oregon State University.

“Since the protected forest area is already very large, it’s probably more important for the government to monitor the forest condition and enforce existing protections on the entire forest area, including those forests where commercial logging is allowed.”

Scientists say Russia and Kazakhstan could make a unique contribution to the fight against global warming by harvesting wild grasses that have overgrown 100,000 square miles of agricultural lands abandoned in the Nineties, and using them to make ethanol – or, better yet, burn them in coal-fired power plants.

According to Nicolas Vuichard, principal author of a paper published in Environmental Science and Technology of Washington, DC, using the grasses to make ethanol would sequester in the ground, over 60 years, about 10 million tons of carbon a year – one quarter as dead root matter in the soil and the rest in producing cellulosic ethanol as a substitute for petroleum-based fuels.

“That’s not huge on a world scale, but on the scale of a country with global warming treaty obligations, it’s substantial,” he says. Fossil fuels emit about 8 billion tons of carbon a year, of which about 2 billion tons are absorbed by plants and soil.

Renton Righelato, visiting research fellow at the University of Reading, and former chairman of the World Land Trust, agrees. “Given that it would take the world’s entire supply of arable land to replace just two thirds of our transport fuel needs,” he says, “biofuels are not a practicable long-term solution for transportation emissions. What we need is carbon-free fuel.”

“But in the case of abandoned croplands, using grasses as biofuels could make a contribution,” he adds.

Study co-author Adam Wolf, of the Carnegie Institution for Science at Stanford University, cites a study by Elliott Campbell in Science magazine that showed that burning grasses in a coal-fired plant doubles the savings in carbon emissions compared to using the same grasses to make ethanol.

“If biofuels are going to reduce emissions, using abandoned croplands to make electricity and offset coal use is our best bet,” he says.

“Both of these countries have coal-fuelled power plants, so the process could start soon.”

Thus, Russia and Kazakhstan are now in a position to become leaders in green energy, and could use the grasses to export clean electricity in addition to oil and gas, according to Mr Wolf.

Also, should they find themselves with carbon-emissions treaty obligations, burning grasses in lieu of coal “would give them carbon credits forever”, he adds.