‘We will support innovation’ 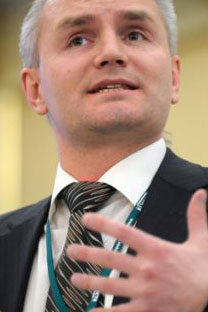 RN interviewed Nikolay Pryanishinikov, the president of Microsoft Russia, at the Krasnoyarsk Economic Forum. He says he cherishes the potential in Russia.

What are Microsoft’s current priorities in Russia?

One is our “Tvoi Kurs” (“Your Course”) initiative, which entails opening centres to train people. Our company plans to open 100 such centres in Russia, the first of which are already in operation. In early February, in Krasnoyarsk, we opened a centre where computer literacy is taught for free. Within three years we plan to train one million people.

Our second programme is to support innovative companies. Microsoft provides them with free software. In addition to training and investing certain efforts and means in this project, we help these firms with access to financial resources and breaking into the international market. Investors are far more favourably disposed toward projects that have a recommendation from Microsoft. More that 1,000 Russian companies are participating.

Our third focus is the technology centre we opened in Moscow. It is now the most modern IT centre in Europe and we are very happy that we were able to open it in Russia.

We also support education in Russia, providing students with free software, and universities and institutes with training courses.

When will Russia’s dependence on raw materials end?

I have to say that Russia has not made very much progress in this respect. But the focus of the government and the president on questions of modernisation and innovation is a very positive step.

How would you assess the IT market in Russia today? Will the situation with piracy change?

In this sphere great progress has been made in the last few years. The level of piracy has gone down while the IT market has grown, although it is still substantially smaller than in other developed countries no matter how you look at it. The dynamic is good, but in and of itself the IT market is still small. In my view it’s very important to grow it because to some extent it is the motor of efficiency and productivity of labour and innovations. It is important that IT companies appear and thrive here in Russia and it’s important that every enterprise invest more in IT – this will promote greater efficiency in business.

If you analyse the structure of the Russian IT market, then you see a large share of equipment and a small share of service and software. In developed countries, as a rule, the ratio is 50/50. So we expect the software and service sector to grow.

Some people have a high opinion of Russian programmers. Is this justified?

There are many extremely talented people in Russia, but so far the powers that be have not been able to offer a convenient means of applying their knowledge and abilities. First, there is a low level of entrepreneurial know-how and skills. There are lots of smart people in Russia, but few know how to create a business and make a profit from that. As a rule, Russian programmers can write a good code, good software, but cannot create a business. We try to help. Microsoft was created in a garage.

Actually, we have a project for young businesses – Start in Garage – where we explain how to start up, how to make a business. Thanks to it, some 100 companies have been created.

The second problem – from the point of view of the IT market – is the reluctance or inability to work with outsourcing, to hire outside companies to do the work that you don’t specialise in. Often Russian IT specialists think that they’re smart enough to do everything themselves. The result is poorer quality and fewer products than those of colleagues who rely on outsourcing.

What has become of Microsoft’s collaboration with Yandex (the Russian rival of Google)?

We are now partners. We’re collaborating on the monetisation of our business and considering expanding our co-operation in several additional projects.

Could Yandex become a global brand?

It’s a local brand for now. It has a very good search for Russianised resources. Naturally for all those who speak Russian, Yandex is the number one search engine. But it hasn’t yet managed to break into other markets, and I think that to do this will be extremely difficult.

In overall terms of conducting business, have conditions changed since Microsoft began working in Russia?

There is progress. This is clear in the improvement of the general business milieu and the right approaches of the government. Of course, there are still areas where the situation in Russia needs improving. This includes transparency, and the many levels of bureaucracy. Deputy prime minister Igor Shuvalev, who’s now in charge of improving the investment climate in Russia, is a moderniser, an energetic man, and correct in everything he says. But between him and real life in the provinces there are several levels of not-so-efficient chiefs.

Some international experts suggest that Russia should be excluded from Bric. Do you agree?

Russia is a large market with a large potential – that is what Bric implies. And the members of Bric are very different. China and India are completely different, while Brazil and Russia are a little more alike – large countries with populations of roughly the same size, roughly the same economic level. Russia has a large intellectual potential, which we will strive to work with.