A new era of solidarity 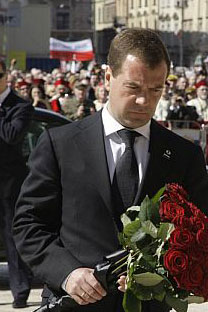 The tragedy outside Smolensk has, to the surprise of many, brought Russo-Polish relations to a new level of understanding.

The recent crash of the Polish president Lech Kaczynski’s plane near Smolensk, where the remains of 22,000 Poles shot by the NKVD in 1940 are buried, prompted an unexpected warming of relations between Russia and Poland. Until now even unshared tragedies (such as the war in Chechnya) inspired only animosity on both sides.

The first hours after the tragedy were as expected. Polish parliamentarian Artur Gorski called the crash “a new Katyn” and accused the Russian authorities of concealing information about Lech Kaczynski’s death.

Then Russian prime minister Vladimir Putin, to whom the Polish media and the late president invariably referred as a “former KGB officer”, flew to the scene while thousands of ordinary Russians brought flowers to the Polish embassy in Moscow. Dmitry Medvedev, whom Kaczynski had refused to meet until the Russian president went to Warsaw, declared a day of mourning in connection with the deaths of his foreign guests – the first time in modern history.

And then came the lifting of visa restrictions for Poles identifying their loved ones, the best forensic analysts were flown in from Russia’s distant corners, and a candid film about Katyn was broadcast on television (see p7).

The Poles responded – in their own way, Polish-style, emotionally and with beautiful gestures. They began expressing not only gratitude, but a desire not just for friendship, but even for “unity” with Russians. Polish foreign minister Radoslav Sikorsky praised Russia’s authorities for “openness beyond normal standards”.

Russia’s state news organization, RIA Novosti, hosted a “letters of condolence” platform on its website, in which thousands of Russians expressed their sympathy.

When Mr Medvedev – unlike the leaders of several Western goverments, including the United States – braved the volcanic ash to attend the funeral of Kaczynski, Biate from Warsaw wrote she had “tears in her eyes” when she saw the Russian president’s aircraft land.

“Thank you to your president, who, despite the risk to his own security, came to say farewell to our president and his wife.”

Not all media were so friendly. “It is nice to see the human faces of the people whom you least suspected of possessing such faces,” one Polish reader wrote.

This phrase, however touching, reflects a large problem. For years Russia has been demonised in the Polish mass media – demonised perhaps more than in any other European country, except Estonia and Latvia. The Russian mass media, too, have mostly preferred in recent years to write about Poland only in connection with the US missile defence system that will now not be located there. The result is an enormous gap between reality and people’s efforts toward each other and the world of politics, diplomacy and the media.

This is why Mr Putin’s behaviour after the crash was such a sensation in Poland. The Polish press had always painted him as an inhuman, cunning, dangerous political machine. Now the Poles were surprised to discover that the mass executions of Polish officers in Katyn had not been a forbidden topic for Russians since 1990 and that Russians sympathise with the Polish victims of Stalin’s repressions since they suffered from these repressions themselves.

As recent events have shown, most Poles and Russians want to see each other in a positive light. There is an aggressive minority that opposes the reconciliation of these two nations, while the majority is inert and mobilises only at dramatic moments such as this. But the aggressive minority is always active – it has access to the media, it has allies in all factions of the Russian State Duma and the Polish parliament.

As the experience of September 11 has shown, when terrorist acts in the US elicited a wave of sincere compassion on the part of Russians, the flowers now outside embassy doors are no guarantee of improved relations in the long term. Days will go by and the well-wishing majority will go back to its daily concerns.

To defeat the active minority will not be easy. But the first step has been taken. The friendly majority has shown its power – at least for a few days.

And Artur Gorski has apologised for his remarks. He explained that they were made under the influence of “two emotions – a devastating despair and confusion”.