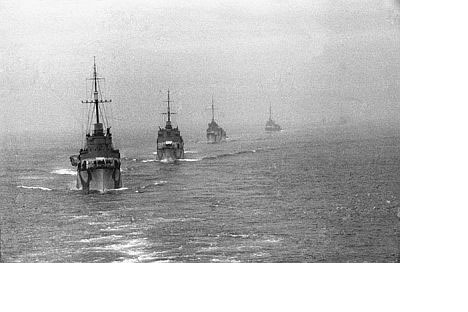 Arctic convoys were the lifeblood for Russia during theSecond World War, and the sailors are seen as heroes

British veterans of the Arctic convoys during WWII, appreciated more in Russia than at home, will this year view the Victory Parade in Moscow’s Red Square.
For the first time, foreign military forces will accompany Russia’s servicemen in the famous Victory Parade in Red Square. British, American and French troops will be a part of the grand display of remembrance and military might that has taken place on May 9 since 1946 – a day later than VE Day in Western Europe, as clocks in Moscow had passed midnight when the German armies formally surrendered.

Stepping out for Britain will be a red-coated marching detachment of the 1st Battalion Welsh Guards, recently returned from Afghanistan, and 45 musicians from the Central Band of the RAF. In the stands, their marching days over, will be four of the few remaining seamen of the Arctic convoys, who will afterwards sit down to a formal lunch in the Kremlin.

Following the June 1941 invasion by 4.5 million German troops, these convoys of American and British ships provided the Soviet Union with a vital line of supply.

Sailing around Scandinavia into the icy Barents Sea, they came under continued attack from U-boats and the Luftwaffe.

Over the next four years, they delivered to Archangel and Murmansk 12,755 tanks, 22,200 aircraft, 375,800 trucks, and four million tons of ammunition and other supplies.

Parade: the annual May 9 victory march in Moscow

More than 100 ships were sunk and nearly 3,000 servicemen lost their lives in what Winston Churchill called “the worst journey in the world”.

Every 10 years since the end of the Second World War (the Great Patriotic War in Russia), a Russian Commemorative medal has been struck for veterans, both in and outside the country.

“It’s more than our own government has given us,” says Jock Dempster, chairman of the Russian Arctic Convoy Club Scotland, which has “30-plus” members, though he is the only veteran from Scotland to be going to Moscow for the parade.

“The next one should have been due in 2015, but they brought it forward, which suits all our guys, because our average age is 87. We’re all very happy to get the medals.”

Scottish veterans have traditionally received their medals from the Russian consular office in Edinburgh, which has brought lasting friendships. Mr Dempster and his wife Maggie are from Dunbar, and they were in Moscow in January celebrating Burns Night.

“It’s a big thing in Moscow,” says Maggie. “It was minus 20, the snow fell like ice and it was absolutely beautiful, but it was too cold for me. We’re looking forward to going in May.”

Jock was 16 when he joined the merchant navy tanker MV San Venancio in 1944. It crossed the Atlantic twice, transporting aircraft fuel, before becoming part of the Arctic convoys where it saw plenty of action. Last summer the Dempsters and two other Arctic convoy veterans joined a commemorative cruise to Murmansk.

“It was quite magnificent,” Jock recalls. “There was a guard of honour, a full naval band, you name it. This was just for three Arctic convoy veterans. They wouldn’t do it in this country if they were three visiting generals. The admiral of the Russian fleet gave a speech, and I gave a speech in Russian.

“Quite a lot of them were reduced to tears that somebody should say something nice about them. They had never stopped appreciating what we did, and I just feel it is sad that we in the West don’t always appreciate what they did. They gave the world the peace we have enjoyed for the past 65 years. If they hadn’t beaten the Germans, I don't know where the hell we would have been.”

This view of the Russians’ role in the war is echoed by Commander Eddie Grenfell. Originally from Peterhead, now, aged 90, Eddie lives in Portsmouth, and he will be in Red Square with his daughter.

“If the Russians had been defeated in 1941-42, the Germans would have transferred 150 army divisions from the Russian front to the Channel coast, and the Allies would never have been able to land on mainland Europe.

“On D-Day we were facing only 35 divisions, and even then we had the greatest difficulty pushing them back. You can imagine if that had been 185 divisions, it would have been impossible. As far as Arctic veterans like myself are concerned, we know that Russia won the war for the Allies. No doubt about it.”

Eddie was a Leading RDF (Radar) Operator on a CAM (Catapult Armed Merchant) ship that was sunk on May 27, 1942. Its Russia-bound cargo included ammunition, tanks, railway engines and, on the fo’ c ’sle, a Hurricane fighter.

“We had a kind of kamikaze before the Japanese ever thought of it,” says Mr Grenfell. “When we saw a German raid coming towards us, we could fire this chap off, but there was no deck for him to come back on. So, once he had done his job shooting down German aircraft, all he could do was come down in the sea, and it was absolutely freezing up there.

“Our chap, a South African, shot down two German aircraft before he was shot down himself. He was badly wounded but, fortunately, he came down near a destroyer and they picked him up.

“The next day the Germans came out with a raid from Norway, with about 200 dive bombers and torpedo bombers. We were hit by five bombs and one went into the ammunition store and the ship just exploded.”

Out of a crew of around 75, there were 16 survivors. The captain and all the officers, except a junior officer, perished.

“I was about 10 minutes in the water and 10 minutes on top of the wreck of a lifeboat,” says Eddie.

After he was rescued, he was taken to a military hospital in Murmansk, and he remained in Russia for six weeks before sailing home in a convoy that lost six further ships.

Unlike Jock, Eddie has not kept up any personal links with Russia, but he says: “I was there long enough to recognise that they were wonderful people. The people who fought in the Arctic have a great respect for the Russians.”

But unlike veterans of other major campaigns, from the Atlantic to Burma, the Arctic convoy servicemen have never been awarded a medal. Outraged at this lack of recognition, and fuelled by an injunction from the Foreign Office that they must not wear their Russian Commemorative medals for the Remembrance Day ceremony at the Cenotaph, Eddie ran a 10-year campaign for a medal, famously standing against defence secretary Geoff Hoon in his Ashfield constituency in 2005. In the end they had to settle for The Arctic Star, an emblem rather than a medal, which Eddie designed.

Now, in Red Square, they will wear the Russian 65th Commemorative medal and the Arctic Star with pride.


Arctic survivors' Order of Lenin
Britain's involvement with Russia began in August 1941, in the weeks following Germany's invasion of the Soviet Union. A special RAF Squadron, 151 Wing, travelled on the first Arctic convoy, bringing an assignment of Hurricane fighters to Archangel and Vaenga, near Murmansk. Some 550 RAF personnel were stationed to train Soviet crews in the 39 aircraft and equipment in temperatures that dipped to -15C. Before leaving in October they had carried out 365 sorties against the Germans. After their return to Britain, the squadron's New Zealander Wing Commander HNG Ramsbottom-Isherwood and three other flyers were awarded the Order of Lenin, presented to them at the Soviet embassy in London. They were the only Allied servicemen to receive this prestigious medal. A few remaining RAF Arctic veterans received their Russian Commemorative medals in two ceremonies, at the Russian embassy and on HMS Belfast.