From the Elbe to Red Square: a soldier’s story 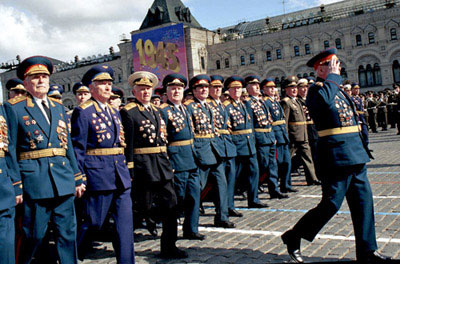 It was 65 years ago, almost to the day, in April 1945. The 20-year-old's unit got word that the Russians were on the other side of the Elbe River. The Elbe was a clear dividing line so that the Russians and Americans would not get in each other’s way.

Though the war was essentially over, the scene was chaotic: Bridges had been blown out, and large groups of dazed Germans were walking toward them, trying to surrender and get something to eat. Cohn’s captain had a top secret map showing the occupation zones, and he believed the Russians were going to cross the river in the near future.

“We wanted to make sure the Russians would not cross for reconnaissance. We feared that Americans would not know who they are and we did not want an incident, a firefight,” said Cohn, sitting in the sunroom of his Alexandria, Va., home. “Our mission was to get to Magdeburg. To the Russians.”

They crossed the Elbe in a rowboat and saw the Red Army soldiers on the other side, cheering them on.

The group includes four Soviet veterans now living in the United States. Veterans from Britain and France will also attend the celebration on Red Square on May 9.

Victory Day is one of Russia’s most significant holidays. It is the day the country can remind the world of its ultimate sacrifice: Almost 27 million Soviet citizens were killed during World War II.

“I hope that this trip will help restore the link between the older generation of Americans who know Russia fought alongside the allies, and the younger generation of Americans who don’t know anything about it,” said Yuri Menshikov, acting director of the Russian Cultural Center in Washington, D.C. Menshikov will also award Russian medals to American soldiers who participated in joint U.S.-Soviet missions.

“A lot of people in the United States think the U.S. fought the Russians in World War II, some polls show,” Menshikov added. “A lot of kids think Russia was their enemy.”

In recent years, Victory Day became a stage for Russia to demonstrate its renewed military might with a parade of missiles and tanks rumbling beneath the platform at Lenin’s Mausoleum. But this year there is also a focus on reconciliation and unity.

For Frank Cohn, the trip could not be more meaningful. Born in 1925, he lived in Weimar Germany until he was 13. He was an 8-year-old boy when Hitler came to power. When he entered third grade in Breslau, he noticed that his teacher was wearing a Nazi uniform for the first time. His friends wore Hitler Youth outfits.

“When they stood up to sing Nazi songs I was allowed to sit down because I was Jewish,” Cohn said. When the kids started chasing him down the street, he started Jewish school. His parents had a sporting goods store, but they soon sold it after it was covered with signs proclaiming, “Jewish-owned store.”

Cohn’s father was in the United States on a visitor’s visa when the Gestapo came looking for him. Frank’s mother got word to his father to stay in America, and, remarkably, the family was reunited in New York.

Frank and his mother landed in New York on October 30, 1938. After the Night of Broken Glass, when 1,300 synagogues were burned in Germany and tens of thousands of Jews were thrown into concentration camps, the Cohns, refugees in America, were allowed to stay.

“When the war broke out in Europe, I was still 16,” Cohn recalled. “When Pearl Harbor was hit, I asked, 'What’s Pearl Harbor?' Certainly it had nothing to do with me. Two years later, I was drafted.”

In April 1945, he was a member of an intelligence unit. Fluent in German, Cohn was brought along to meet the Russians because he was an interpreter. “But I didn’t know a word of Russian. My captain said, ‘You’re my interpreter, you’re coming.’”

As his captain showed Russian officers the top secret map that carved out occupation zones for the Allies, Cohn sat on the river’s edge with the Russian soldiers.

Cohn had cigarettes. The Russians had vodka.

“One sergeant took a shine to me,” Cohn said. “He said something like, 'I come from Moscow. You must visit me.'”