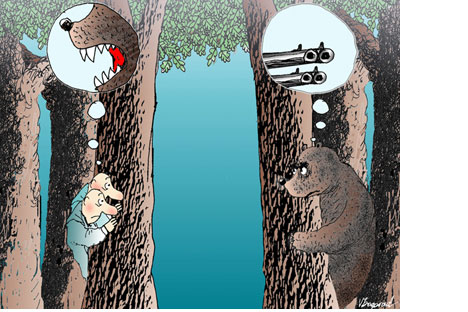 The first time Russia’s membership in the alliance was seriously considered was in the early 1990s, when former president Boris Yeltsin was lobbying for integration into the most prominent Western institutions. In the early 2000s, former president Vladimir Putin did his part to push for more cooperation with Western security structures under the banner of the joint fight against terrorism.

But much has changed since then. Russia’s push for Western integration has been replaced by a stronger desire to regain its global influence that the Kremlin hopes may some day rival NATO. We are seeing more and more schisms among NATO members as their numbers grow. If Russia were to become a full-fledged member, NATO would surely become a completely dysfunctional organization, after which Washington would lose all interest in it.

Russia’s membership in NATO would be accepted very coolly by China, which would probably view this as the final stage of its geopolitical encirclement by the United States and its NATO allies. This would heighten tensions in Russian-Chinese relations and forfeit one of Russia’s greatest post-Soviet foreign policy achievements — the establishment of stable and friendly relations between Moscow and Beijing. Few NATO members would want to get bogged down defending its new NATO member along the 4,300-kilometer Russian-Chinese border.

It would be completely unrealistic to try to solve the problem of European security in one fell swoop by granting NATO membership to Russia, and presumably Ukraine, Georgia, Belarus, Kazakhstan and other states. (This “NATO” has long existed — the Organization for Security and Cooperation in Europe — and there is no sense in duplicating it.)

Since Russia’s membership in NATO is clearly a nonissue for the near future, what can be done to simply improve NATO-Russian relations? The first step would be to acknowledge that the excessive, chronic suspicions toward NATO and the United States harbored by Moscow do not strengthen European security. Moscow has an idee fixe that the West is determined to weaken Russia by any possible means, with the ultimate goal of dismembering the country and carving it into servile satellites. According to this thinking, NATO expansion, Western support of the color revolutions and U.S. plans to “encircle” Russia with its global missile defense system are all elements of an insidious Western plot to bring Russia to its knees.

There is a second misconception that Russia, not the West, plays the evil role. This notion holds that the Kremlin dreams of restoring its lost empire by annexing or subjugating former Soviet republics — and perhaps even former Warsaw Pact countries—and once again shipping dissenters to Siberian gulags. This Russophobia was seen, for example, in the suspicious way in which the West viewed the Russia-Georgia war of 2008, the criticism heaped on President Dmitry Medvedev for his doctrine of “privileged interests” in the former Soviet republics and the Kremlin’s plan to purchase a warship from France.

These excessive anti-Western or anti-Russian views do not in any way reflect post-Cold War reality. Nonetheless, both misconceptions are deeply rooted in the psychology of certain factions in the ruling elite on both sides of the fence. Only time and painstaking work can gradually eliminate these deeply ingrained ideas. The United States should take the primary initiative in improving relations, particularly since so many opportunities were lost in the administrations of former U.S. presidents George W. Bush and Bill Clinton. They have been more diligent in pursuing a strategy of transforming the defeated superpower into an independent and respected partner of the United States.

Conversely, Russia should take practical steps toward dispelling the fears of its neighbors in Central and Eastern Europe. The Kremlin has already come to realize that without good relations with Poland, it will not have normal relations with the European Union and the West. Putin has done a lot to improve relations with Poland in recent weeks. It is in Russia’s interest to make Warsaw a true economic and political partner on the same level as Moscow’s relations with Berlin, Paris and other European capitals. Poland will hardly become an outspoken advocate of Russia within the European Union or NATO anytime soon, but if Warsaw adopts a more positive policy toward Russia, this could play a significant role in improving overall relations between Russia and the West. In addition, the Kremlin should set a new, positive tone toward the Baltic states. Moscow should stop treating them as outcasts. Russia can start by opening its government archives and creating favorable conditions for a serious discussion on issues of their common — albeit difficult and painful at times — history.

Neither the expansion of NATO nor the European security pact proposed by Medvedev alone are capable of uniting Europe. What is needed is the creation of a common security zone encompassing all of these states in which war and the use of armed forces would be abolished. That has already been achieved within the framework of NATO and the EU. It exists de facto between Russia and most European states, including Germany.

There is one gaping hole in building this broad security framework: Russia’s strategic relationship with the United States. A good place to start would be to work together on building regional missile defense systems. The first steps were taken in 2003 under the auspices of the NATO-Russia Council, when computer-assisted joint exercises were held to develop interoperability on a future theater missile defense system. There have been many verbal overtures from both sides to continue this work, but they need to be turned into concrete projects.

Solving the “Russia question” will not by itself pave the way to European security. There are unresolved conflicts in the Caucasus, Kosovo and Cyprus. The parties immediately involved in those conflicts must find a way to reach a reconciliation. This could occur soon if an appropriate level of understanding and cooperation existed between the United States, the E.U. and Russia. The creation of a common territory for an overarching security arrangement is the most important collective project of the 21st century—a feat that, if accomplished, would be comparable in significance to the creation of NATO.