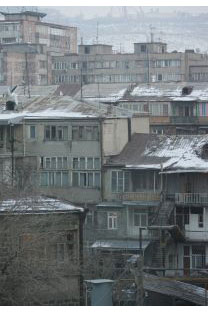 The normalization of Armenian-Turkish relations is going through another crisis. On April 22, Armenian President Serzh Sarkisian suspended the ratification of two protocols signed by Yerevan and Ankara in Zurich on October 10. The current situation is made more difficult by the fact that Armenia and Turkey have yet to establish diplomatic relations. Ankara is still enforcing a land blockade of Armenia although planes between Turkey and Armenia are flying. Turkey supports the position of Azerbaijan in the conflict over Nagorno-Karabakh, helps prepare Azerbaijani officers for the military, builds transportation routes circumventing Armenia, and at the official level still denies the 1915 genocide of Armenians. In Armenia, these events are principle subjects of historiography, the collective memory and the spiritual culture.

But does the Armenian president’s April decision mean a return to the “pre-Zurich” era? The best answer to this question would be an analysis of the general context of Armenian-Turkish relations since the collapse of the Soviet Union. It could help to repudiate many myths and stereotypes concerning one of the most complex problems in Eurasia.

After Armenia became independent in 1990, Turkey again proposed that it consider bilateral relations, looking to the future rather than the past. Armenian leaders, too, made an effort to establish dialogue with Turkey. In 1992, Armenia’s first president, Levon Ter-Petrossian, met with Suleyman Demirel, then prime minister of Turkey. In the course of these meetings, the problem of Karabakh was discussed. However, a worsening of the military situation on the Karabakh front in 1993 and Azerbaijan’s eventual defeat led to a new estrangement between Turkey and Armenia. Turkey refused to separate Turkish-Armenian relations from the Armenian-Azerbaijani conflict and accused Armenia of aggression against Azerbaijan and of supporting Kurdish terrorist organizations. Despite Turkey’s hard line, Yerevan continued to hope that the estrangement could be overcome. In 1995, in a speech honoring the 80th anniversary of Mec Exern (“the great tragedy,” as Armenians refer to the events of 1915) Ter-Petrossian laid responsibility for the genocide on the regime of the Young Turks (the Committee of Union and Progress), not the Turkish people.

After Ter-Petrossian left office, Yerevan’s official position became more rigid. Speaking at the 53rd Session of the UN General Assembly, Armenia’s second president, Robert Kocharian, tried to bring the “Armenian question” back into the sphere of international policy. His stance on a range of Armenian-Turkish matters was far tougher. He did not attend a summit of the Organization of the Black Sea Economic Cooperation (BSEC) in Istanbul in June 2007. He said his decision was motivated by the absence of diplomatic relations between the two countries.

Only in 2008, after long years of diplomatic stagnation, did relations between the two countries begin to take a constructive approach. Regional officials and businessmen in Turkey have publicly expressed interest in developing economic ties with Armenia. Several years ago on the official NATO site, Turkish researcher Burcu Gultekin published a paper called “Prospects for Regional Cooperation on the Southeastern Borders of NATO: Development of Turkish-Russian Cooperation in the South Caucasus”. Gultekin argued that Turkish policy was held hostage by the country's relations with Azerbaijan. In his opinion, “open borders could promote a better image of Turkey in Armenian society and pull relations between the two countries out of the current crisis situation.” The publication showed that among Turkish experts - a traditionally pro-Azerbaijani community - the opinion is forming that the current economic blockade of Armenia does not promote stability in the region.

What would a decision by Turkey to normalize relations with its neighbor Armenia mean? Mainly this would be a political step. Economists have written any number of times about the costs to Armenian businesses, which cannot compete with Turkish businessmen. However, a warming with Turkey would allow Yerevan to separate the Nagorno-Karabakh conflict from the whole spectrum of Armenian-Turkish relations. For Turkey, reconciliation with Yerevan would be a new step towards the hoped-for European integration. This strategy has become a top foreign policy priority for the government of Turkish Prime Minister Recep Erdogan.

There are other reasons as well. Ankara is seriously worried that the United States will recognize the Armenian genocide. Inside Turkey, this problem is not simply a matter of a flat denial of the 1915 tragedy. The motivations of Turkey’s political class are more complex and contradictory. In the opinion of Turkish experts Bulent Aras and Havva Karakash-Kelesh, the system of superethnic values created by the Turkish Republic, from the moment of its founding by Kemal Ataturk, does not allow one to talk about “ethno-national diversity,” especially as regards the “Armenian question.”

It is important to acknowledge that both societies have an interest in resolving the problems that have accumulated over years and centuries. However, no satisfactory headway was made in this respect in 2008-2010. The fundamental problem of mutual trust remains. Although officials in both capitals have talked about a “turning the page,” suspicion on both sides persists. Turkey is worried that the problem of the genocide of Armenians could be used by foreign players, such as the United States and the European Union, as an instrument to weaken its geopolitical position. There are also fears that recognition of the genocide could provoke an ethnic split in Turkey and give new impetus to the Kurdish movement (already a problem for the Turkish authorities. Meanwhile, Armenia in 2008-2010 overestimated its chances to separate regulation of the Nagorno-Karabakh problem from the process of Armenian-Turkish normalization. And having failed there, it lost interest in reconciliation with its Turkish neighbor.

However, it does not follow that suspension of the ratification is the end of the peace process. Ratification had already come to a standstill, Sarkisian merely made the fact official. At the same time Yerevan has not abrogated the documents it signed last year in Zurich.

“Agreements between Armenia and Turkey will remain on the long-term agenda of the National Assembly of Armenia,” said Speaker of the Parliament Ovik Abramian.

The protocols have been removed only from the sessions’ immediate agendas. So the main task of the current hiatus in the peace process is to review past mistakes, illusions and naïve dreams of a “quick breakthrough.” The preconditions exist for a new round of bilateral “resets.” Therefore, both sides should remain clam and not exacerbate the new crisis. In the end, any peace process is a complex and contradictory phenomenon in which the role of irrational factors is great. Still it is possible to be rational. In 2009, the signing of the two protocols in Zurich seemed an impossible dream, and yet it did take place.