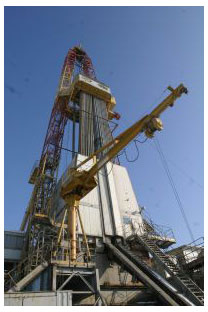 Ukrainians and energy experts are still reeling from Russia's offer to merge its Gazprom gas monopoly with Ukraine's state energy firm, Naftogaz. Ties between Moscow and Kiev have significantly warmed since Kremlin ally Viktor Yanukovych became Ukrainian president in February. Both sides have already signed a deal on gas pricing and a landmark lease extension for a Russian naval base in Ukraine's Crimea. Russia's latest proposal, however, had a bombshell effect, sparking a furious outcry from Ukraine's opposition.

Prime Minister Vladimir Putin made the surprise offer on April 30 after talks with his Ukrainian counterpart, Mykola Azarov, in the Russian Black Sea resort of Sochi.

"We have talked about integration in the nuclear field. We are prepared to do the same in the gas field," Putin said. "I propose merging Gazprom and Naftogaz."

Although a spokesman for Azarov described Putin's comments as "impromptu," Putin's spokesman, Dmitry Peskov, said the proposal was in fact "a thought-out, calculated proposal."

Such a merger would allow Moscow to control its own gas transit to Europe, 20 percent of whose gas imports flow through Naftogaz's pipelines.

"Not In Ukraine's Interest"

The deal, which would also give Gazprom domination over Ukraine's domestic gas market, is likely to meet fierce resistance in the country.

Opposition leader Yulia Tymoshenko said it was part of "a plan to destroy Ukraine." Analysts, too, caution that the proposed merger would not be in Ukraine's interest.

Former US Ambassador to Ukraine Steven Pifer says Naftogaz would essentially be swallowed up by Russia's most powerful energy firm.

"I think the Ukrainians ought to be very careful about it. The reason is that if you look at Gazprom and if you look at Naftogaz, Gazprom is by far a much larger economic and business entity. It's in much better fiscal shape: it's making money, Naftogaz is not," Pifer says.

"If they were to combine, the resulting entity would be very much dominated by Gazprom and Russian interests."

Most energy experts say Ukraine has the potential to significantly increase its own gas production and thereby reduce its dependence on Russian imports.

Pifer says a merger between Gazprom and Naftogaz would dash Ukraine's ambitions to exploit its own gas resources in the future.

"So it is going to mean that Ukraine remains dependent on imported gas from Russia, which I think has both economic and political implications."

Merging the companies, however, seems unrealistic because Gazprom dwarfs the embattled Naftogaz, which is not even a publicly traded company.

Experts point to difficulties in estimating the value of Naftogaz, which does not publish its financial results and restructured its debt last year.

U.S. energy expert Edward Chow says a rushed merger could allow Gazprom to snap up Naftogaz for a symbolic sum.

"It's extremely dangerous. How do you evaluate how much Naftogaz is worth?" Chow asks.

"Let's say ExxonMobil was going to merge with Pemex in Mexico. It would probably take investment bankers two or three years to figure out valuation. And they are talking about doing this in a couple of weeks. There's no way on Earth that anyone could do this properly."

Some experts say Russia, short of a full merger, may settle for the creation of a joint venture to upgrade and co-manage Ukraine's strategic but rundown pipeline network.

Russia has long pressed Ukraine for such a deal, and the two sides are reportedly in talks to create a consortium