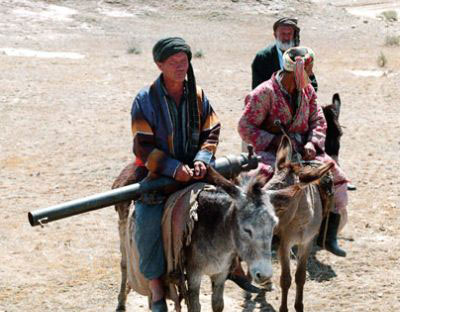 There are tens of thousands of drug-related deaths in Russia each year. Getting on top of the heroin problem means going back to the source in Afghanistan.

Twenty years ago, not many in Nizhny Novgorod, Russia’s fourth largest city famous for Volga car and 900-year-old traditional architecture, had even heard of heroin. If people wanted a little indulgence, they turned to vodka. Now that period of innocence has ended as Nizhny, just as every other Russian city, has been swamped by the heroin tsunami that streams in from across the border from poppy fields in Afghanistan.

To get a sense of ravages wrought by heroin addiction, go and look at the staircases in the GAZ factory district, where unemployment is soaring and you will find them covered with syringes.

Ask at Moskovskiy railway station, you will be surprised how quickly you can get a shot of heroine for $2.5, a cheaper pleasure than a bottle of vodka. The statistics are indeed chilling: around 30,000 people in Russia died of heroin overdose last year; the authorities link another 100,000 deaths to drug-related complications.

“Afghan drug traffic is like a tsunami wave constantly breaking over Russia - we are sinking in it,” says Victor Ivanov, Director of Russia’s Federal Service for the Control of Narcotics. Little plastic bags with white powder travel across Central Asia in a thousand ingenious ways: smugglers sneak them inside young onions or cabbages and let the vegetable grow around them. Or they come in handbags of passengers, spreading pain, disease and death along the way. To stop Russia from becoming the world’s biggest consumer of Afghan heroin, Ivanov, the country’s top counter-narcotics official, is determined to root out this curse by attacking it at its root in Afghanistan.

Russia’s anti-drug drive in Afghanistan has, however, brought it into conflict with the Obama administration, which ended a military drive of destroying poppy crops as they thought it was alienating farmers and driving them to support the Taliban. Ivanov has often accused the Nato of not doing enough to curb the production of heroin in Afghanistan. Perceptions may differ, but clearly it is Russia, not the US, that is paying a heavy price.

According to Ivanov, at least 120,000 drug users and dealers were sentenced to jail last year, filling Russia’s already crowded prisons. “We have beaten Guinness’ records; even in China, they put in jail 60,000 drug criminals. It is useless to fight the problem just on this territory,” he says grimly.

In early March, Ivanov, called the Russian Drug Czar in the West, flew to Kabul with a group of journalists on a mission to declare as loudly as possible that Russia is returning to Afghanistan to fight again. This time round, he stressed, it will be against drugs.

A Russian role in Afghanistan became important last summer, when Russian President Dmitry Medvedev and his US counterpart Barack Obama formed a presidential team to cooperate on a number of themes, the anti-drug campaign being one of them. Subsequently, Ivanov met his American counterpart, Gil Kerlikowske, the director of the Office of National Drug Control Policy and this became the channel for Russia's expanded role in Afghanistan. Together, they agreed that considering Russia’s unique experience and knowledge of the country, Russia would help find drug dealers and landlords growing poppies in Afghanistan.

Despite initial dissonance on the issue, the two sides have common interests in stamping out poppy production: opium proceeds are funding Islamic insurgency not only in Central Asian countries and in Russia’s North Caucasus, but also in Afghanistan itself.

In Kabul, Ivanov had a flurry of meetings with Afghan President Hamid Karzai, Vice-President Karim Halili, and officials of the UN and NATO. In all his meetings, his message was sharp and clear: Russia was coming back to help Afghanistan reconstruct some of 140 important sites, including the Naglu power station, Salang tunnel, factories and highways. Russian ambassador in Kabul Andrei Avetisyan confirmed the Russian state’s intention to replace House of Science and Culture, ruined by Taliban’s shrapnel and currently populated with homeless heroin users, with a children’s surgical hospital on the site. Let children’s hospital become the symbol for Russia-Afghanistan relations, the envoy said.

The humanitarian reconstruction effort was animated by an urgent mission to shield Russians from the curse of Afghan-origin drugs. “In this respect, the information we are going to provide is priceless,” Ivanov said at a meeting of a non-official international anti-drug council in Kabul. He suggested that the International Security Assistance Force (ISAF) should use chemicals to eliminate poppy plantations in Afghanistan by at least 20 pc, and not by less than 4 pc as it happened last year.

But his suggestions were resented by the UN and NATO officials who argued erroneously that it was up to Afghanistan’s elected leaders to decide whether to take jobs away from opium farmers or not.

This argument riled Ivanov no end. As he flew back to Moscow, he vented out his frustration: “I hear the same cliches again and again. In eight years of the NATO’s presence in Afghanistan, the volume of drug production has increased by 40 times.” Ivanov was unsparing in his indictment. “And the declared purpose for the NATO presence in Afghanistan does not come any closer, but on the contrary, is moving further away from stability.”

Ivanov, however, pointed out that some NATO countries like Italy, France and Germany shared Russia’s growing anxiety about the perils of unchecked production of poppy. They do treat drug traffic very seriously, Ivanov said.

Afghan farmers working in a poppy field in Kandahar, a major source of drugs flowing into Russia

While politicians and military commanders try to thrash out their differences, back in Nizhny Novgorod thousands of heroin addicts continue to suffer.

The scene is harrowing. Methadone is not used, and in older clinics, patients are sometimes chained, screaming, to a bed in the first days of withdrawal. About 80 patients came for treatment at the Exit rehab center, a chain of eight residential clinics in the Nizhny Novgorod Oblast, in the barley fields and birch forests of the Russian countryside.

After suffering through the worst days of pain, Exit’s patients help each other learn how to handle daily chores and recover from psychological dependence. They chop firewood, cook their own meals and pray together with their priest, a former addict, Denis Zorin. Heroin is the world’s evil, says the priest. “It is comparable to a chemical weapon, capable of destroying our society quietly without much noise.”