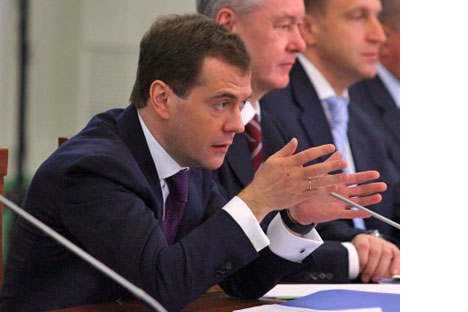 The lawyer for the businesswoman, Vera Trifonova, 54, told The Moscow Times on Monday that he would sue the investigator and judge who kept her in custody amid her refusals to admit to wrongdoing.

Trifonova, who had a grave form of type 2 diabetes, died of heart failure Friday afternoon in the prison hospital of the Matrosskaya Tishina pretrial detention center, where she had been jailed since December.

Bastrykin, in turn, promised to determine whether Trifonova's arrest was "the only possible measure" in the case and "strict measures" would be taken against those responsible for her death, including investigators and their superiors, the Investigative Committee said in a statement.

The circumstances of the death resemble those of Magnitsky, 37, who was jailed on tax evasion charges that he and his supporters called revenge fr om Interior Ministry officials whom he had accused of embezzlement.

Magnitsky's death led to a public outcry that prompted Medvedev to fire about 20 senior prison officials, including the head of Matrosskaya Tishina. No one has been prosecuted in the case.

Trifonova, head of the KitElitNedvizhimost real estate company, was accused of involvement in a scam to sell a senator's seat in the Federation Council for $1.5 million to MFT-Bank chief executive Pavel Razumov.

Her lawyer, Vladimir Zherebyonkov, said the chief investigator in the case, Sergei Pysin, had agreed to release her if she admitted to playing a role in the scam but she had refused.

"I'm going to seek the prosecution of the investigator who kept her in jail and the judge in the case who prolonged her arrest in April," Zherebyonkov said by telephone.

Pysin and other Investigative Committee officials could not be reached for comment Monday, a national holiday.

Matrosskaya Tishina officials had asked investigators to release Trifonova because of her poor health, Sergei Tsygankov, a spokesman for the Moscow branch of the Federal Prison Service, said Saturday, Interfax reported.

"She became my client in March, and when I visited her in jail her eyesight was about 10 percent and her lungs were full of liquid and she couldn't sleep," Zherebyonkov said. "She told me that in response to her complaints, prison doctors recommended to her to sleep standing."

Shortly after Trifonova's arrest, her health worsened and she was placed in City Hospital No. 20 but was then sent back to jail.

The Spravedlivost civil rights group released a doctor's note dated April 2 that said Trifonova, diagnosed with type 2 diabetes and with only one working kidney, could not receive the necessary treatment in jail and needed to be transferred to a hospital.

On April 16, Odintsovo City Court judge Olga Makarova refused to release Trifonova on bail of 520,000 rubles ($17,700) and sent her to the Mozhaisk jail. At the time, news reports quoted Trifonova's lawyer as warning that she might become "a second Magnitsky."

The Mozhaisk jail, located about 100 kilometers west of Moscow, refused to accept the ill woman and sent her to a local hospital, which was not equipped to provide the needed treatment, Zherebyonkov said.

"It was a historic moment when the chief of the Mozhaisk prison called me, a lawyer, saying that they couldn't accept such a ill person," Zherebyonkov said.

Last week, Trifonova was transferred to Moscow to receive treatment. On Thursday, she was taken to Matrosskaya Tishina's prison hospital in preparation to be sent back to City Hospital No. 20 the next day. She died before she could be transferred.

"This just shows that the tragedy of Sergei Magnitsky wasn't a lesson for anyone," Zherebyonkov said. "The complete indifference of everyone in the system is to blame. I appealed to about 30 officials, but no one intervened."

Investigators had accused Trifonova of working with Magadan regional lawmaker Georgy Shamiryan and accomplice Yury Shubin to offer a seat representing Magadan in the Federation Council when in fact they did not have a seat to sell. The Moscow-based banker complained to police, and Shamiryan and Trifonova were detained on Dec. 16 in a sting operation in the Moscow region town of Zhukovka, wh ere they were supposed to receive the money, investigators said.

According to investigators, it was Trifonova who introduced the banker to the Magadan lawmaker.

All three suspects have maintained their innocence.

About 400 people died in pretrial detention last year, according to prison figures.