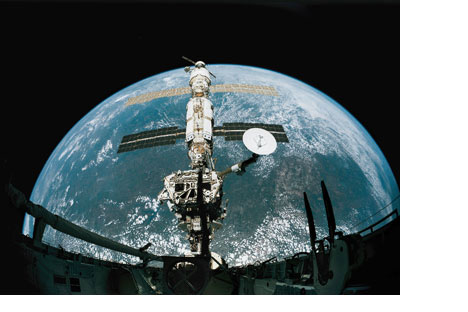 A new space race is on as the balance of power shifts. The US and Russia are competing as well as cooperating as emerging powers like India and China join the fray…

On April 2, the Soyuz TMA-18 lifted off from the Baikonur Cosmodrome in Kazakhstan, carrying two Russians and one American to the International Space Station. Circling the planet, the crew will engage in intense cooperation, blithely indifferent to shifting power play on the ground.

Russian-American space cooperation has increased recently. But it’s becoming clear that Russia will fuel space exploration once again, while the US will increasingly rely on Moscow to take its astronauts into space.

Nasa has long spent more money on more programmes than Russia’s space agency. But President Barack Obama has dampened Nasa’s dreams of returning to the moon.

At the same time, the Russian space industry is once more feeling the warm glow of state backing. There has been concerted investment in recent years, an investment that fits in well with the Putin doctrine of trying to restore Russian pride through capacity.

The Russian government has increased spending on the space industry by 40 pc for each of the past five years, spending just under $2.8 bn in 2009, Euroconsult reported. “It’s like night and day,” said Igor Lissov, editor of Novosti Kosmonavtiki (Cosmonautics News), comparing funding today with funding in the penurious Nineties.

Putin launched an initial $10 bn programme for the space industry between 2006 and 2015. When Putin congratulated space industry workers in 2008 on Cosmonauts’ Day, he called on them to pursue “really ambitious projects”.

The US Constellation human-flight programme was designed, according to President George W. Bush, to “establish an extended human presence on the moon” that would then lead to flights to Mars. Obama cut it from the 2011 budget as the financial crisis snowballed and programme expenditure soared. The government said that though Nasa has already spent $9 bn on it, the programme is “fundamentally unexecutable”.

Instead, the US will look to private companies to invest in future spacecraft. In the meantime, US astronauts will hitch a lift on Russian spacecraft, a move that has Nasa supporters crying foul.

Russian academic Yury Zaitsev told Interfax news agency that he thought the US would be dependent on Russia to transport its astronauts until at least 2020. “In order to bring a craft to the standards of quality and safety for a piloted flight, you need years and years,” he commented.

Nasa has signed a $335 mn contract with the Russian Federal Space Agency (Roscosmos) for US astronauts to fly to the ISS in 2012.

The new spirit of cooperation is a far cry from the start of the space race in the Cold War era when space conquests of the USSR pushed the US to greater feats in space, such as the first man on the moon in 1969.

As Russia braces to celebrate the 50th anniversary of Gagarin’s first flight on Cosmonauts’ Day on April 12 in 2011, the year of the Russian cosmonaut, Moscow however, must rethink its priorities, says Valery Kabusov, a former deputy head of Energiya, Russia’s rocket and space corporation.

And while both countries feel they are the frontrunners, their dominance may well be challenged in the next decade by India and China as they ramp up funding of their own programmes. The Chinese launched for the third time its Shenzhou VII spacecraft and also their first spacewalk in 2008, while India is planning a manned flight by 2014.

Some astronauts and cosmonauts find nationalist rivalries distracting. Wouldn’t it be better if all space-exploring countries got together to send a human-flight to Mars?

“I have thought all my life that a flight to Mars is a great opportunity for humankind to move forward,” says Alexander Serebrov, who flew into space three times for the Soviet Union and once for Russia. “It has to be done through international cooperation.”

Meanwhile, the Russian government has this year set aside 500m roubles ($17.2 mn) for the development of nuclear-powered spacecraft, which could be used “for long-distance missions to the moon and Mars”, explains Anatoly Perminov, head of Russia’s Space Agency, which is hoping that the new engines will be ready for use “within nine years”.

Vitaly Lopota, head of the Energiya corporation, added that “the solar system could only be conquered on the basis of nuclear energy”. Between 1970 and 1988, the Soviet Union sent 32 crafts into orbit that had thermo-electric nuclear-powered engines. But nuclear-powered spacecraft was outlawed by a series of international treaties in the Eighties due to fears of their potential collapse. Russian space officials now hope the treaties can be re-examined amid global plans for more long-distance space missions. Lopota assures that nuclear spacecraft would not be sent “to orbits from which they could fall to the earth”.